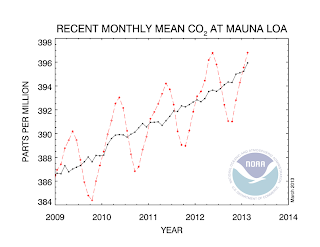 This brings up two issues. The first is that it appears that the CO2 number is continuing to rise.  If the linkage to industrial production is valid then this pretty well shows us that global consumption has not abated at all.  If the linkage is not valid, then the alternative explanation is that a warmer Earth is releasing a lot of CO2.  The logic is inescapable.  CO2 production is a lagging indicator to a warming Earth or the present stable temperature plateau lasting fifteen years is not affected by rising CO2.

The second issue is that is effectively our only deemed high quality independent measure of atmospheric CO2.  We all rely on it and have no good way to know if it is truly independent.  The reason I am bring this up is that all those industrial smokestacks have relocated directly upwind over the past three decades.  Could the pollution be a factor in changing the numbers upward?

In spite of some very nice optimistic modeling confronts a westerly wind system and surface air will be driven upward over the peak itself.  I think it is optimistic to assume we are consistently sampling the upper atmosphere here.

I would feel better about all this if we had ten comparables including balloon data.  It is really high time to ask what else might be happening here.  I dislike comfortable assumptions that go unquestioned.

The chances of the world holding temperature rises to 2C – the level of global warming considered "safe" by scientists – appear to be fading fast with US scientists reporting the second-greatest annual rise in CO2 emissions in 2012.

Carbon-dioxide levels measured at at Mauna Loa observatory in Hawaii jumped by 2.67 parts per million (ppm) in 2012 to 395 ppm, said Pieter Tans, who leads the greenhouse-gas measurement team for the US National Oceanic and Atmospheric Administration (NOAA). The record was an increase of 2.937nbsp;ppm in 1998.

The jump comes as a study published in Science on Thursday looking at global surface temperatures for the past 1,500 years warned that "recent warming is unprecedented", prompting UN climate chief, Christiana Figueres, to say that "staggering global temps show urgent need to act. Rapid climate changemust be countered with accelerated action."

Tans told the Associated Press the major factor was an increase in fossil-fuel use. "It's just a testament to human influence being dominant", he said. "The prospects of keeping climate change below that [two-degree goal] are fading away."

Preliminary data for February 2013 show CO2 levels last month standing at their highest ever recorded at Manua Loa, a remote volcano in the Pacific. Last month they reached a record 396.80 ppm with a jump of 3.26 ppm between February 2012 and 2013.

What is disturbing scientists is the the acceleration of CO2concentrations in the atmosphere, which are occurring in spite of attempts by governments to restrain fossil fuel emissions.

According to the observatory, the average annual rate of increase for the past 10 years has been 2.07 ppm – more than double the increase in the 1960s. The average increase in CO2levels between 1959 to the present was 1.49 ppm per year.

The measurements coincide with a new peer-reviewed study of the pledges made by countries to reduce CO2emissions. The Dutch government's scientific advisers show that rich countries will have to reduce emissions by 50% percent below 1990 levels by 2020 if there is to be even a medium chance of limiting warming to 2C, thus preventing some ofclimate change's worst impacts.

"The challenge we already knew was great is even more difficult", said Kelly Levin, a researcher with the World Resources Instistute in . "But even with an increased level of reductions necessary, it shows that a 2° goal is still attainable – if we act ambitiously and immediately."

Extreme weather, which is predicted by climate scientists to occur more frequently as the atmosphere warms and CO2 levels rise, has already been seen widely in 2013.

and have experienced their coldest winter in decades and has seen a four-month-long heat wave with 123 weather records broken during what scientists are calling its "angry summer".

"We are [getting] into new climatic territory. And when you get records being broken at that scale, you can start to see a shifting from one climate system to another. So the climate has in one sense actually changed and we are now entering a new series of climatic conditions that we just haven't seen before," said Tim Flannery, head of the Australian government's climate-change commission, this week.

Earlier this week the Met Office warned that the "extreme" patterns of flood and drought experienced by in 2012 were likely to become more frequent. One in every five days in 2012 saw flooding but one in four days were in drought.

No rise in average global temps in 15-16 years. CO2 doesn't matter. I don't know why people keep beating this dead horse. The medieval warm period was just as warm, if not warmer than today, without our modern fossil fuel consumption.