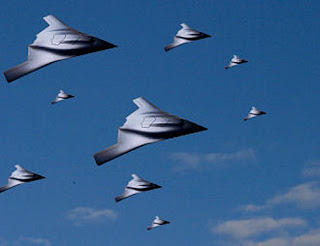 No one appears to have publicly connected the dots yet but drones are the future of all aircraft except for hobby horses. If a pilot is along at all it will be as an emergency responder and even that may become nonviable. Our cars will move us and our aircraft will also end up with the pilots somewhere else. We just have to get used to it.

Jet fighters are about to become drones just to eliminate the constraints of a human pilot. Can you imagine confronting a flight of fighters able to do thirty G turns and to convert closing speed to Mach 5 while locked in weapons independently decide to launch and engage. We can build combat spaces which no human can survive but can guide remotely.

This is obviously the first legitimate challenge to US naval hegemony and encourages a rethinking. Fortunately we are already going there. We are now deploying laser guns quite able to knock anything coming in at line of sight. I suspect that the technology will also soon achieve rapid fire.

With drones, it is no trick to use small carriers again and many of them who have launch capacity. Thus we could get our drones to adopt harrier configurations to allow recovery or we may even may need to develop recovery vessels that hang back. The sheer potential volume of drones that become possible encourage cheap platforms.


China is building one of the world's largest drone fleets aimed at expanding its military reach in the Pacific and swarming U.S. Navy carriers in the unlikely event of a war, according to a new report.

The Chinese military — known as the People's Liberation Army (PLA) — envisions its drone swarms scouting out battlefields, guiding missile strikes and overwhelming opponents through sheer numbers. China's military-industrial complex has created a wide array of homegrown drones to accomplish those goals over the past decade, according to the report released by the Project 2049 Institute on March 11.

"The PLA now fields one of the world's most expansive UAV [unmanned aerial vehicle] fleets," said Ian Easton and L.C. Russell Hsiao, researchers at the Project 2049 Institute and authors of the new report.

U.S. military forces still operate the largest drone fleet, with at least 679 drones in 2012, according to data from the International Institute for Strategic Studies reported by the Guardian. But the new Project 2049 Institute report estimates that China had 280 military drones as of mid-2011 — a number that has likely grown since then.

Chinese military drones have already entered the frontlines of China's territorial disputes with neighboring countries such as Japan by flying maritime patrols over disputed areas. The Project 2049 Institute report warned that China could be tempted to use drones more aggressively without risking human lives, or even consider "plausibly deniable" drone attacks blamed upon mechanical failure or cyberhackers.

Chinese strategists have also discussed using swarms of drones to overwhelm the U.S. Navy's carrier groups in the unlikely possibility of a shooting war. The drones could act as decoys, use electronic warfare to jam communications and radar, guide missile strikes on carriers, fire missiles at U.S. Navy ships or dive into ships like kamikaze robots.

All the main branches of the Chinese military field operational drone units. The new report identifies those military units along with major academic, industry and military organizations involved in building Chinese drones.

The report goes on to examine the state of Chinese drone technology. China is developing drones such as the rumored "Dark Sword" stealth drone that have low radar profiles to escape radar detection. It also wants to build "space" drones that could loiter at heights of 31 miles (50 kilometers) above the Earth to provide constant surveillance. (Scientists typically consider 62 miles (100 km) to mark the boundary for the edge of space.)

Chinese engineers have even begun working on drones that have the software brains to fly in formation, do aerial refueling and takeoff and land autonomously — capabilities that the U.S. military has also developed or begun testing for its own drones.


The risk of war between the U.S. and China remains low. But the report cautions that the U.S. military could prepare for the worst-case scenario by hardening its existing air bases in Asia and developing energy weapons (such as lasers) for better air and missile defense.