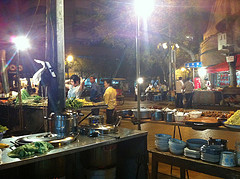 This is an amusing item on the wonders of interacting with the nuances of Chinese culture. It is a fun tale well worth it. Chinese culture was never self conscious regarding their culture. After all, they could quite rightly be so as theirs was central and intact over thousands of years. Catching up to modernism was a shocking interlude well delivered and has created modern China. Yet it was only a couple of centuries.

Even better, they have absorbed huge parts of western culture just as we are absorbing attractive parts of their culture.

The Chinese today are creating a presence everywhere as a global culture. Thus we all learn to understand many of those nuances,.

FAKE GOODS: What It's Like To Be An Australian-Born Chinese Woman Living In China

The Chinese taxi driver had a big incredulous smile plastered over his face.

“Where are you from?!” he asked, hardly containing his laughter.

To any ordinary foreigner this is an ordinary question.

CanBut to a Chinese Australian in China, the question contains an unintended implication which stings, just a little.

This made him laugh even more. “HAHAHAHAHA, no you are not! I mean you LOOK like one–”

“But I certainly don’t sound like one,” I finished for him, with a sigh.

It’s been a year and a half since I landed in China.

Back then I didn’t have a lick of Chinese, any kind of Chinese. I couldn’t even say “I don’t understand,” so people would speak to me and I would open my mouth, but then say nothing. Just stare at them, open-mouthed and silent.

The road from there to now – conversational Mandarin – has been a hard, brow-beating slog of masochistic proportions. And after all of that my white foreign friends will be applauded for the simplest of ni haos, while my Chinese will always be substandard.

For according to my appearance, it should be flawless.

There has only been one instance where I’ve managed to pass myself off as a Mainlander.

Chongqing gave me my first taste of having Mandarin that, lo-and-behold, was better than a Chinese person’s. On my first night in the friendly town of Dazu I found a street corner with food stalls and in ordering up some of “what that guy is having,” soon discovered the waiters weren’t able to speak Mandarin, only speak their own dialect.

Luckily I’d picked a table with a young, local student who could also speak Mandarin, and his father, so they translated for me. The student had a cute, boyish face, and wore a black T-shirt with a stylish print.

He told me his English name is ‘Smooth’.

I laughed, and gently informed him that ‘smooth’ isn’t really a name. “I know. But it sounds good and it suits me,” he replied with a smile. Fair enough.

After chatting a while I asked him slyly, “where do you think I’m from?”

He thought for a moment before offering, “Xinjiang?”

I was floored! Xinjiang is a North-Western autonomous region of China, quite distinct from the rest of the country.

The province has a strong Eastern European and Turkish influence, and the local ethnic group look almost white. So while it’s not exactly a compliment to my Mandarin I was amazed he had even assumed I was Mainland.

I knew I was about to blow his mind with the next sentence. “Actually,” I paused for effect, “I’m a foreigner. My ancestors are Chinese, but I was born and raised in Australia.”

His eyes widened, “No way!” His father also smiled in surprise. “You’re my first foreign friend!” he beamed. I pointed out that he’d said his English teacher was Australian, but he replied that didn’t count.

That evening I thought sure, I’d never pass as a Beijinger. Let’s face it, with that piratey-rrrrr, few Chinese can. But what about the provincial locals who can’t really speak Mandarin? Surely I can pass for one of them?

The next day I landed in the city of Chongqing, where I met up with my Chinese friend, 22 year old customer service assistant Xiao Hu.

She took me to the city’s esplanade, which was buzzing with Friday night revelers. Even so late in the evening the heat was suffocating, with Xiao Hu commenting that Chongqing is the hottest place in China.

“Wouldn’t that be a more Southern city like Guangzhou?” I asked, feeling uncomfortably beads of sweat slide down my back.

She explained that Guangzhou had the sea breeze. In Chongqing the heat was trapped like an angry bee, seeming to rise from every surface. I looked down on the Yangtze River. At that time of the year the water was very low, revealing mangy patches of dirt.

We entered a packed elevator to leave the platform. I’d been talking to Xiao Hu in Chinese while everyone else was silent so my voice seemed extra loud.

A moment later I heard an awed voice from behind me suddenly say, “foreigner.”

The young woman had even said it in English, further rubbing salt in the wound. I turned around, exasperated, and said, “Yes! Foreigner.”

All my joy from Dazu where I’d been taken for a Xinjiang person instantly evaporated.

And so it is with every Beijing taxi driver I come across. They never suspect my substandard Mandarin is because I’m from another province.

They know that I’m a foreigner because I speak Mandarin like a foreigner.

It’s difficult to pinpoint why, exactly, it’s so important to me to pass off as a Chinese person. No more guffawing from taxi drivers would be just one of many advantages.

When I’m traveling in the countryside I can go for days without seeing a single foreigner.

One simply becomes accustomed to being surrounded by 1.3 billion Chinese people, with the sight of that shining, white skin with the curly hair or absurdly tall figure is somewhat of a shock. Even my white friends living in China – all of whom will report a degree of frustration at the staring they attract – say they also can’t help but double-look at the sight of a pale-skinned compatriot.

I like the fact that I don’t get gawked at and can quietly, and inconspicuously, go about my business.

I like the fact that this country and culture is, in so many ways, so different to what I knew growing up. And yet the bridge between me and the Chinese is smaller than what it is for a non-ethnically Chinese foreigner.

A white person can work on their Chinese all they like, peppering their flawless Chinese with all sorts of authentic local slang. They can live, eat and sleep like a Chinese person.

But in the end when you’re living in a country that’s as ethnically homogenous as this, there will always be an unbridgeable gap.

My gap is not physical in nature. It is entirely abstract and one that can be filled in with time, experience and knowledge. Language is only the first step. There is culture too.

My last dinner in Chongqing with Xiao Hu was hot pot. Plates of meat and vegetables cooked in a delicious broth infused with shiny-red chillies, plump mushrooms and herbs.

As we ate, Xiao Hu and I discussed some of the peculiarities of the Chinese language, and she asked me if I knew about the roundabout ways one must talk in Chinese.

[ The first thing I learned with the Chinese is that there is no escaping a drink. - arclein ]

“Let’s say you invite a Chinese person over to your house. Naturally you ask them if they’d like a drink. They’re going to say no, because they don’t want to trouble you.”

“Right. So even if they say no, you should get them a drink. Tea preferably, otherwise water is fine.”
“But what if they really didn’t want one?”

“Then they won’t drink it.”

I laughed at this.

Humility, self-depreciation, courtesy and saving face lay at the heart of Chinese manners, in a way that takes some high degree of getting used to. Particularly for Australians and Americans whose nations’ histories are short, and did away with their colonial past in order to create young, dynamic societies featuring first egalitarianism, honesty and efficiency.

As a child growing up in Sydney my parents had done a poor job in educating their children about Chinese-style behaviour.

Every time my brothers, sister and I were taken to their hometown in Malaysia on family holidays we’d spend the time feeling like elephants crashing through the Chinese crystal shop of manners.

We couldn’t pick up on the subtle cues that they, having grown up in a Chinese community, were so well versed in. And my extended family couldn’t understand why we were so rude.

Only as an adult did I begin to get a handle on things, and have since learned to “fudge” it – but it never feels like second nature.

It is a language I’ve learned, just like Mandarin, rather than something I was born with. So I am always fumbling around awkwardly, afraid I’m about to (or have already) taken a wrong step in a very crowded minefield.

Despite all my dining faux pas, grammatical errors on Weibo, and horrifyingly Australian accented Chinese, I can look back on this last year and a half and see I have improved in leaps and bounds and in that stepped closer into that thing called China.

It is only a matter of time before my ‘fraudulent’ Chinese identity emerges into something close to authenticity. My ancestral links to this country will no longer seem absurd, but only natural.

China, that 5000-year-old-plus great dame, in which nearly one fifth of the world’s population lives, is, in many ways, as close as the rest of the world has to a parallel universe.

Being ‘hua-ren’ means I have a rare opportunity: a foreigner with full access.

And in this process of discovery I find myself changed. Not so much a transformation, as a new ambidexterity.

I have not lost myself, but gained a new self.