It is high time to start taking these structures in Bosnia seriously whatever we may think of the interpretation. Importantly, it is claimed that this is a working pyramid. That is very important.

Even better we have a high quality cement we want to replicate.

As I have been extensively posting, we are steadily unearthing and recovering the shape of the Atlantean world from 3000 BC to 1159 BC and the Bronze ingot currency that drove it. All the core Atlantean centers mustered the man power able to build large pyramids. We are now finding them.

I also see no Atlantean evidence to support earlier chronology. However, this pyramid has been continuously radiating and I do suspect that this will strongly age carbon isotopes and I should mention that the aging limit for carbon is generally 12,000 years and should be labeled alternatively as greater than.

As readers of my blog likely understand, there certainly existed a pre - Pleistocene Nonconformity human world that we can rightly name as Antediluvian. To some degree, it is plausible that a pyramid power source technology existed and was simply abandoned before the crust was shifted. The great pyramid could be part of that while the Atlantean age was correctly one of imitation.

The high quality concrete is the best argument for an antediluvian chronology and must be taken seriously. 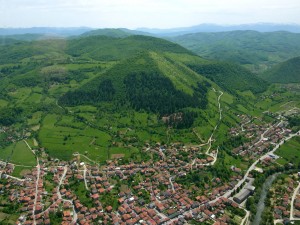 Significance of the Bosnian Pyramid Discovery

Foreign member of the Russian Academy of Natural Sciences

It was in April 2005 that I first traveled to the town of Visoko, 20 miles northwest of Sarajevo, the capital of Bosnia-Herzegovina. Two pyramid shaped hills caught my attention at that time, and I later named them the Bosnian Pyramids of the Sun and Moon. For thousands of years locals had considered those pyramidal shapes just natural hills though they did have the shape of a pyramid because they were covered by soil and vegetation. When I first saw their triangular faces, obvious corners and their orientation toward the cardinal points, I knew that they had to be constructed by a force other than nature. I have investigated pyramids for decades throughout the world including China, Mexico, Guatemala and El Salvador and they had the same type of soil and vegetation coverage, I knew they had to be pyramid structures.


In 2005 work was started unearthing these pyramids and various construction companies and geologists were hired to do core drilling and geo-morphological analysis. Then I announced to the world, in a press conference, that the first pyramids in Europe had been discovered. 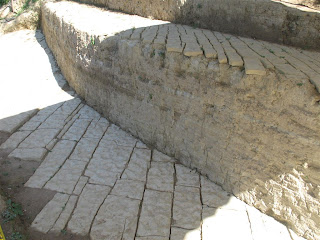 Shortly thereafter I established the non-profit, Archaeological Park: Bosnian Pyramid of the Sun Foundation, and the investigations in Bosnia have proven this complex holds the world’s largest inter-disciplinary archaeological project. We spent over 340.000 hours in archaeological excavation, sample testing and radiocarbon dating from 2005 until January of 2011. Discoveries have determined that the Bosnian Pyramid Valley consists five pyramids discovered to date which I have named: The Bosnian Pyramids of the Sun, Moon, Dragon, Mother Earth and Love. The site also includes a tumulus complex and a huge underground labyrinth that stretches for more than 10 miles underneath the pyramidal complex.

This discovery is changing history because of several things:

This list of Bosnian archaeology finds does not end here. In the vicinity, we discovered the tallest tumulus in the World which is 61 meters high. Up until now the highest tumulus known was in Sillbury Hill in England and measure 60 meters high. The Bosnian tumulus consists of two-layers of megalithic terraces, clay layers and artificial concrete layers.


In 2010, a team of physicists who were brought onto the project located detected an energy beam coming through the top of the Bosnian Pyramid of the Sun. The radius of the beam is 4.5 meters with a frequency of 28 kHz. The beam is continuous and its strength grows as it moves up and away from the top of the pyramid. This phenomenon contradicts all known physical laws known to man today. This is the first proof of non-herzian technology on the Planet. It seems the original pyramid-builders in what is now Bosnian created a perpetual “energy machine” that is still working today.


In the underground labyrinth we discovered three chambers in 2010 and a small blue lake. Energy screening shows that the ionization level is 43 times higher than the average concentration outside which makes the underground chambers healing rooms.


Further electromagnetic detection in 2011 confirmed that levels of negative radiation through the Hartman, Curry and Schneider grids are equal to zero in the tunnels. There was no technical radiation (from power lines and/or technology) found in the tunnels and no cosmic radioactivity.


The large ceramic sculptures are positioned over the underground water flows resulting in the negative energy being transformed to into positive energy. All of these experiments point to the underground labyrinth as one of the most secure underground constructions in the world making it ideal for body rejuvenation and regeneration.


Two hundred years of Egyptology has not produced a satisfactory answer to the question of what the real purpose was for building the pyramids. But with only six years of research on the Bosnian pyramids we have applied inter-disciplinary scientific research looking at this complex from not only the physical, but the energetic and spiritual dimensions as well which has produced some astounding information. And, we have pioneered results which affects the science of pyramids which until now has largely been ignored in Egypt. This archaeological project is changing the world as we know it with each new discovery.


Perhaps by exploring new ways of looking at things we can learn from our ancient past by changing our present and make our future better.

http://www.tnetimes.com/article/220-bosnian-pyramid-discovery-significance-energy-fields-semir-dr-sam-osmanagic-osmanagich-houston-bosnia-coast-to-coast-megalithomania-indiana-jones-ancient-civilizations-alien-Giza-plateau-great-zahi-hawass/#sthash.svs5yY9l.dpuf
Posted by arclein at 12:00 AM

This further conforms the view expressed by John Michell in his books View over Atlantis and City of Revelation that there have been architects on the planet performing earth acupuncture, if you will, from times long past.

Of course, in our modern world that is largely blind to seeing or experiencing the flows of primordial energy within our bodies or through the very ground upon which we live, such phenomena golargely unnoticed. Kudos to Semir “Dr. Sam” Osmanagich. They say in the land of the blind the one eyed man is king. Dr. Sam is surely king in our modern world.

As they say in the National Football League, "Upon further review..."

Although there is ample confirmed evidence of human activities to alter the flow of energy on the land - the Native American mounds of Illinois and SW Florida, the Egyptian and Mayan pyramids, and Stonehenge to name a few - the Bosnian pyramids may not be among them. This discussion in Wikipedia raises the distinct possibility the the Bosnian "pyramids" are actually natural formations: http://en.wikipedia.org/wiki/Bosnian_pyramids .

Robert Schoch of Boston University underscores the viewpoint that the Bosnian "pyramids" are indeed of natural origin. http://www.robertschoch.com/bosniacontent.html

Dr. Sam may not be much of a king after all. You decide.

Schoch's walk through was 2006. The indication is that much has been done since. A fresh independent review is justified as to technique and excavation results.

More important, I want to see a top flight analysis of the 'concrete'. It is highly amenable to specialist work. These are the folks who i want to inform us as to the artificial nature of this concrete.

If they are able to confirm the artificial nature and the recipe, then the dispute is over. That may not be quite so easy though but it is well worth a try.