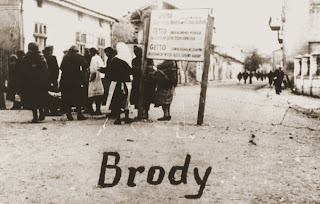 The core problem of the Holocaust was the logistics and this spells that out pretty clearly. It also becomes clearer just how the end point of what is a chain of events was substantially camouflaged from those at least who did not want to know. In your own community you would see labor camps clearly doing useful things. Attrition from those camps was inevitably to another country for 'resettlement'. One never saw the result of that 'resettlement'.

Thus while the majority of citizens likely condoned the labor and disenfranchisement, they were never asked to progress past that. Those that objected were suppressed. This process also created a time gap that broke personal ties to the community. In a way I suspect it was all very subtle until toward the end when urgency overcame nicety.

The wise and shrewd would and did see through it and develop informants to establish the facts. Yet they were powerless and easily intimidated. The history not yet told is that of the outright suppression of objectors.

Hitler's advantage was simply that a huge fraction of the German, French, and Polish populations were instinctual antisemitic and thus sympathetic at least while never quite imagining were this all led. Today we know better and can act quickly. The lesson of Hitler likely did more that anything to derail apartheid and Jim Crow than anything else we could possibly imagine. It is my contention that it was our inability to imagine that allowed the Holocaust to remain below the radar. The reports came out and no one wanted to believe them. Today the opposite is true.

The inherent challenge of tribalism and governance is still an unsolved problem though now well diluted by modernism. What we lack are effective means and leadership to interrupt genocides.

The Holocaust Just Got More Shocking

THIRTEEN years ago, researchers at the United States Holocaust Memorial Museum began the grim task of documenting all the ghettos, slave labor sites, concentration camps and killing factories that the Nazis set up throughout Europe.

What they have found so far has shocked even scholars steeped in the history of the Holocaust.

The researchers have cataloged some 42,500 Nazi ghettos and camps throughout Europe, spanning German-controlled areas from France to Russia and Germany itself, during Hitler’s reign of brutality from 1933 to 1945.

The figure is so staggering that even fellow Holocaust scholars had to make sure they had heard it correctly when the lead researchers previewed their findings at an academic forum in late January at the German Historical Institute in Washington.

“The numbers are so much higher than what we originally thought,” Hartmut Berghoff, director of the institute, said in an interview after learning of the new data.

“We knew before how horrible life in the camps and ghettos was,” he said, “but the numbers are unbelievable.”

The documented camps include not only “killing centers” but also thousands of forced labor camps, where prisoners manufactured war supplies; prisoner-of-war camps; sites euphemistically named “care” centers, where pregnant women were forced to have abortions or their babies were killed after birth; and brothels, where women were coerced into having sex with German military personnel.

Auschwitz and a handful of other concentration camps have come to symbolize the Nazi killing machine in the public consciousness. Likewise, the Nazi system for imprisoning Jewish families in hometown ghettos has become associated with a single site — the Warsaw Ghetto, famous for the 1943 uprising. But these sites, infamous though they are, represent only a minuscule fraction of the entire German network, the new research makes painfully clear.

The maps the researchers have created to identify the camps and ghettos turn wide sections of wartime Europe into black clusters of death, torture and slavery — centered in Germany and Poland, but reaching in all directions.

The lead editors on the project, Geoffrey Megargee and Martin Dean, estimate that 15 million to 20 million people died or were imprisoned in the sites that they have identified as part of a multivolume encyclopedia. (The Holocaust museum has published the first two, with five more planned by 2025.)

The existence of many individual camps and ghettos was previously known only on a fragmented, region-by-region basis. But the researchers, using data from some 400 contributors, have been documenting the entire scale for the first time, studying where they were located, how they were run, and what their purpose was.

The brutal experience of Henry Greenbaum, an 84-year-old Holocaust survivor who lives outside Washington, typifies the wide range of Nazi sites.

When Mr. Greenbaum, a volunteer at the Holocaust museum, tells visitors today about his wartime odyssey, listeners inevitably focus on his confinement of months at Auschwitz, the most notorious of all the camps.

But the images of the other camps where the Nazis imprisoned him are ingrained in his memory as deeply as the concentration camp number — A188991 — tattooed on his left forearm.

In an interview, he ticked off the locations in rapid fire, the details still vivid.

First came the Starachowice ghetto in his hometown in Poland, where the Germans herded his family and other local Jews in 1940, when he was just 12.

Next came a slave labor camp with six-foot-high fences outside the town, where he and a sister were moved while the rest of the family was sent to die at Treblinka. After his regular work shift at a factory, the Germans would force him and other prisoners to dig trenches that were used for dumping the bodies of victims. He was sent to Auschwitz, then removed to work at a chemical manufacturing plant in Poland known as Buna Monowitz, where he and some 50 other prisoners who had been held at the main camp at Auschwitz were taken to manufacture rubber and synthetic oil. And last was another slave labor camp at Flossenbürg, near the Czech border, where food was so scarce that the weight on his 5-foot-8-inch frame fell away to less than 100 pounds.

By the age of 17, Mr. Greenbaum had been enslaved in five camps in five years, and was on his way to a sixth, when American soldiers freed him in 1945. “Nobody even knows about these places,” Mr. Greenbaum said. “Everything should be documented. That’s very important. We try to tell the youngsters so that they know, and they’ll remember.”

The research could have legal implications as well by helping a small number of survivors document their continuing claims over unpaid insurance policies, looted property, seized land and other financial matters.

“HOW many claims have been rejected because the victims were in a camp that we didn’t even know about?” asked Sam Dubbin, a Florida lawyer who represents a group of survivors who are seeking to bring claims against European insurance companies.

Dr. Megargee, the lead researcher, said the project was changing the understanding among Holocaust scholars of how the camps and ghettos evolved.

As early as 1933, at the start of Hitler’s reign, the Third Reich established about 110 camps specifically designed to imprison some 10,000 political opponents and others, the researchers found. As Germany invaded and began occupying European neighbors, the use of camps and ghettos was expanded to confine and sometimes kill not only Jews but also homosexuals, Gypsies, Poles, Russians and many other ethnic groups in Eastern Europe. The camps and ghettos varied enormously in their mission, organization and size, depending on the Nazis’ needs, the researchers have found.

The biggest site identified is the infamous Warsaw Ghetto, which held about 500,000 people at its height. But as few as a dozen prisoners worked at one of the smallest camps, the München-Schwabing site in Germany. Small groups of prisoners were sent there from the Dachau concentration camp under armed guard. They were reportedly whipped and ordered to do manual labor at the home of a fervent Nazi patron known as “Sister Pia,” cleaning her house, tending her garden and even building children’s toys for her.

In Berlin alone, researchers have documented some 3,000 camps and so-called Jew houses, while Hamburg held 1,300 sites.

Dr. Dean, a co-researcher, said the findings left no doubt in his mind that many German citizens, despite the frequent claims of ignorance after the war, must have known about the widespread existence of the Nazi camps at the time.

“You literally could not go anywhere in Germany without running into forced labor camps, P.O.W. camps, concentration camps,” he said. “They were everywhere.”

Eric Lichtblau is a reporter for The New York Times in Washington and a visiting fellow at the United States Holocaust Memorial Museum.

So How Many Re-location/Re-Education Concentration/Extermination-History is Laughing At Us Camps Are We Up Too in America? 110!
The Lack of Knowledge By Today's People And The Level of The Demoralization Process in This Country is Basically Completed Already, And Has Been For About 25 years. Actually, it's Over Fulfilled To Put it Lightly Because The Demoralization And The Wilfully Ignorant Majority, it Now Reaches Such Areas Where Not Even Hitler's Nazi's And All His Experts Could Have Never Dreamed of Such A Tremendous Success! And Most of it is Done By Americans To Americans,Thanks to Lack of Moral Standards Ext..Stories Like This One And Exposure to True Information Does Not Matter Anymore. A Person or Persons Who is Demoralized is Unable to Assess True Information. The Facts Mean Nothing to Him, Even if You Were To Shower Them With Information,or With Authentic Proof, With Documents And Photos, Even if You Were Take Them By Force to The CAMP'S And Show Them How Real These Concentration Camp's Are...They Will Still Refuse to Believe it.... ONLY When The Military Boot Crashes-Their Door, Will They Understand..But Not Before Then.. That's The Tragedy of The Situation...

"Re-location/Re-Education Concentration/Extermination Camps"? Huh?
What's on TV tonite? Pass me another beer and some chips.