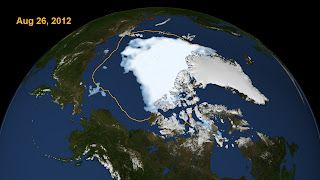 Here begins the long climb down from the high horse of man made global warming that has bedeviled debate on the warmer climate we find ourselves experiencing. In time they will reach the point I made when I began this blog several years ago.

It remains warmer and that is good news. The bad news is that is as good as it likely gets. If we are lucky, we may get two or three decades of nice conditions. If unlucky, it will dump and we will be into the deep freeze again . This warm spell is getting old.

Of course the climb down will switch into a route if we get a sudden chill that freezes the Potomac. Let us hope not. That will be expensive. I am expecting a long drawn out warm era myself that may even last a couple of centuries but can be wrong in the short term and this is only based on a weak thousand year long signal in the data.


Albeit very quietly, a major mainstream news publication came forward admitting the once over-hyped threat of CO2, as it relates to alleged “global warming,” may no longer be as much of a problem as previously advertised.

An extraordinarily strange phenomenon has occurred within the world of science and news.

A gigantic shift is taking place in the way a potential threat to mankind has been largely viewed by “science” and the public for decades. Yet, somehow, the entirety of the vast media-industrial complex has managed to overlook this massive situation.

Once billed as the end of human civilization as we know it, CO2, labeled a “greenhouse gas”by the EPA and potentially threatening all life on the planet, if not brought under control, is now all of the sudden being acknowledged asmuch less of a threat to the public as was once thought.

Despite this incredible revelation, somehow no one in the establishment's media has either seen it or is willing to touch it, other than the original journalist and a blog or two.

Any other time news of this magnitude becomes public, it would typically be seen as a gigantic story. But when a respected NYT earth-science blog unearths a damning report, downplaying a formerly impending situation, one would think it would become one of those news days that would go down in the annals as one of the more memorable.

UN climate scientists have been arguing for decades that carbon emissions from various sources, like cars, factories, cows, etc., are all causing a dramatic and unsustainable rise in global C02 emissions. According to the UN and former UN lawyer Al Gore and his Academy award-winning documentaries and best-selling books, this was causing a greenhouse effect that was quickly approaching a point of no return for all life on the planet.

The focal point of the UN's climate alarmist arguments were in regard to “climate sensitivity,” in relation to additional atmospheric concentrations of greenhouse gases. It referred to how much warming can be expected from a doubling of carbon dioxide concentrations in the atmosphere, based on current (CO2) greenhouse gas emissions projections.

According to the United Nation’s Intergovernmental Panel on Climate Change (IPCC), a 2007 report concluded that:

Climate sensitivity is likely to be in the range of 2 to 4.5°C with a best estimate of about 3°C, and is very unlikely to be less than 1.5°C. Values substantially higher than 4.5°C cannot be excluded, but agreement of models with observations is not as good for those values.” In IPCC parlance, likely means that there is a 66 percent probability that climate sensitivity falls between 2 and 4.5°C (3.6 to 8.1°F), with 3°C (5.4°F) as the best estimate.

Conversely, some researchers even suggested the UN's figures were conservative and likely much worse than even that.

In layman's terms, should industrial CO2 emissions not be addressed in any meaningful way, according to many of the world's climate alarmists piggybacking off of the UN's information, the earth was warming and the eventual rise in overall global temperature averages would lead to polar ice cap melting, rising oceans and ocean temperatures, natural disasters of epic proportions and a domino effect leading to vast famine and disease.

If global carbon taxes weren't implemented on all of the pollution and CO2 emitting corporations, in a vast transfer of wealth to those who would be self-proclaimed as responsible for managing the situation for the rest of humanity, all life on the planet would be eventually doomed to man's inability to see the “warning signs,” before it was too late. Humanity was in desperate peril.

Now, as if somebody just switched on the lights, scientists have begun discovering that CO2 may not actually be anywhere near the problem it was originally being sold to the public as.

According to a substantiated group of corroborating studies, recent figures suggest that climate sensitivity is drastically less than the IPCC's old estimate. In the NYT report, the publication suggests:
...one critically important metric — how hot the planet will get from a doubling of the pre-industrial concentration of greenhouse gases, a k a “climate sensitivity” — some climate researchers with substantial publication records are shifting toward the lower end of the warming spectrum....

But while plenty of other climate scientists hold firm to the idea that the full range of possible outcomes, including a disruptively dangerous warming of more than 4.5 degrees C. (8 degrees F.), remain in play, it’s getting harder to see why the high-end projections are given much weight.

This is also not a “single-study syndrome” situation, where one outlier research paper is used to cast doubt on a bigger body of work — as Skeptical Science asserted over the weekend. That post focused on the as-yet-unpublished paperfinding lower sensitivity that was inadvisedly promoted recently by the Research Council of Norway.

In fact, there is an accumulating body of reviewed, published research shaving away the high end of the range of possible warming estimates from doubled carbon dioxide levels. Chief among climate scientists critical of the high-sensitivity holdouts is James Annan, an experienced climate modeler based in Japan who contributed to the 2007 science report from the Intergovernmental Panel on Climate Change.

It seems as though, best estimates of climate sensitivity are now merging into a commonly understood figure that is even lower than 2°C… A vast reduction from alarmist's original estimates.

And although having trouble with just how much of a reduction that is, while still holding on to the belief that even the new, much lower estimates could still potentially cause eventual warming detrimental to the well-being of the planet's current ecosystem, the publication ends by by acknowledging “libertarians” as having been right all along, saying:

I can understand why some climate campaigners, writers and scientists don’t want to focus on any science hinting that there might be a bit more time to make this profound energy transition. (There’s also reluctance, I’m sure, because the recent work is trending toward the published low sensitivity findings from a decade ago, from climate scientists best known for their relationships with libertarian groups.)