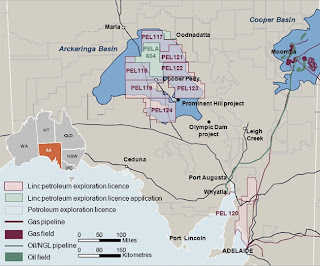 This is a lot short on technical details, but it is a shale based discovery that will need to be proved out. It is certainly huge and appears likely to be highly productive. We already pretty well knew this but thanks to fracking, deliverable oil at anything over $50 a barrel is becoming a global glut. It will first prove so by the USA going into a surplus position and no longer needing to import anything from off shore.

China and India are the two great export markets and the rush is on in order to supply them. Yet even they are able to produce a lot of their own needs to provide ample bargaining power.

Europe already has Russia and internal resources to tap so they also are exiting the global market pretty quick.

This leaves South America and Africa depending on the expansion of internal markets.
Essentially continents are internalizing this resource and facing huge competition for export product. Get over it. The OPEC party is truly over.

They now have to generate internal markets and come to as real grip on the challenge of modernization. That is not the light at the end of the tunnel.

Could The Oil Discovery In South Australia Be A Game Changer?

Oil is not called black gold for nothing. Oil runs the world right now, and has done so for over 100 years. Even given all of the hype about wind, solar and the natgas fracking bonanza, oil will run the world for the foreseeable future. Oil is vital to the immediate future of the human race, and there have not been very many "huge" oil finds in recent memory, until now that is, if we are to believe the January 23rd news release from Linc Energy (LNCGY.PK) of Australia.

According to Dr. Kent Moors-- an adviser on energy matters toMoneyMorning.com and to a number of World Governments including the USA and China-- the recent discovery in the Ackaringa Basin by Linc Energy Ltd (LNC-ASX) is a "game changer" that will actually tip the balance of power, financially, politically and maybe even militarily, on the world stage. Those are big claims and I do not agree with nor dispute them as I will leave that to greater minds than I.

What I am interested in, is the actual claim by Linc energy, it's investment potential and how it may affect the similiar geology of other Australian oil basins, especially those bordering the Ackaringa Basin in South and Western Australia.

The "top" numbers quoted by Linc Energy's two consultants on the project, 1-DeGolyer and MacNaughton and 2-Gustavson Associates, LLC range from 103 to 233 billion barrels of oil or almost 20 $Trillion in today's dollars. Since the discovery, Linc Energy stock has risen 30%, with a lot more upside, if these reports are anywhere near credible. As the naysayers come out of the woodwork, I will look for an entry point in the $25 range (hopefully)

There are some reports now disputing these top numbers, but whatever the outcome, there is no doubt that there is lots of oil in the Ackaringa Basin. Now, it becomes a matter of who gets to extract and sell it, and how long that will take. The area has some infrastructure but more infrastructure is needed before these things can occur.

Since I am always scouring the Penny Stock market for needles in that haystack, I began to focus the surrounding Basins with similar potential. The centre of the Linc Discovery in the Ackaringa is a small town called Coober Pedy. Dr Moors has made much about this small town and real estate has already jumped in the few short weeks since the announcement.

Located about 40km west of Coober Pedy is the start of the "Officer Basin", which, by Australian Government accounts, is similar in geology to the Ackaringa Basin. Although there has been no report of any major discovery there yet, there is Australian Government geological data indicating oil and gas are present there. What is interesting to me is that a tiny Canadian oil junior, Rodinia, controls 85% of 23 million acres there.

I don't have a crystal ball, and I don't have connections to big oil. Even though I use 10% of my portfolio to play in volatile penny stocks, I do try to place my bets carefully.

If Dr Moors is right, the potential of both South and Western Australia's oil and gas resources could truly be a game changer, especially given it's close proximity to Asia. Big oil already is making a footprint in the Australian offshore as well as Australia's own BHP Billiton (BHP). If the Linc claim is anywhere near the numbers quoted, it is only a matter of time before big oil gets involved, and that usually means a rich partner for the juniors or outright takeovers of these companies and their resources.

I will be betting on the latter as this story unfolds. It will be interesting to see which one is circling around Linc Oil, or any of the juniors and mid tiers with stakes down under. I think this is just the start of the next energy boom.