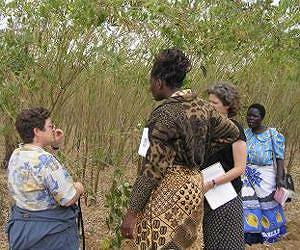 Again the future is now. These are simple ideas that can be accessed by anyone with a cell phone. Boots on the ground have no difficulty sharing the underlying knowledge today and people are responding.

And what a thousand can do today a million can do next year.

It is humbling to understand that tossing out a successful idea can today reach everyone where everyone is a scientist quite able to try out an idea to see if it will work. it can affect right down to the least likely. All of Africa is singing this song as is the rest of the world.

It also reminds just how much real productivity has been locked up in pure ignorance. That is no longer an excuse.

Through research led by Michigan State University, crop yields have increased dramatically. The children of Ekwendi, Malawi, also have gained weight and are taller. These improvements bring smiles to Sieglinde Snapp, MSU ecologist, and other researchers who have worked in Malawi for many years.
Snapp, a crop and soil scientist at MSU's Kellogg Biological Station, shared the secrets of the initiative's success at the annual meeting of the American Association for the Advancement of Science Feb. 14-18 in Boston.

One of the focal points of her research has been improvements in crop diversity and soil health, which have increased yields. Snapp has worked with local scientists, hospital staff and extension workers to rotate cereal grains with bushy legumes, which sparks soil improvement without relying solely on fertilizers.

Crop model simulations, long-term field trials and on-farm experimentation highlight which combinations of legumes, cereals and soil management are best at using resources efficiently. Rotating corn with pigeon pea mixtures (a shrubby legume) keeps the soil from being stripped of nutrients, such as nitrogen, while increasing nutrient-rich grain productivity.

"Participatory action research combined with access to new seeds of bushy food legumes has helped spread a mantle of green across the countryside and help achieve greater food security," Snapp said. "There have been notable gains in dietary diversity and increased child health in hundreds of farm communities of Northern Malawi - a truly sustainable project."

Malawi farmers, many of whom are women, also play a critical role in the program's success. They have embraced the initiative and constantly look to improve their efforts through testing of crop rotations, nutrient-enriched legumes, drought-tolerant crops and staple cereals. Working together, the entire team will help cope with a changing world, Snapp added.

The results speak for themselves:

+ Corn yields increased from 50 to 200 percent, when comparing rotating crops to monoculture.

+ Soil improvement supported reduced fertilizer use and a 20 percent improvement in yield stability, supporting communities' ability to cope with drought.

+ Children's weight and height have climbed and now meet international norms for healthy children. The biggest gains were found in villages where the program has been going on the longest.