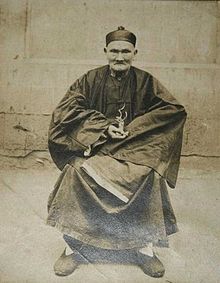 Our first instinct is simply to ignore this story as a deliberate tall tale. Yet it appears to have been triggered by the investigations of serious local authorities who got interested in the case.  Certainly the conditions were right for a local community to vouch for the authenticity of these claims.  That meant undisturbed records and little local mobility allowing folk memories to be preserved to provide at least 150 years of direct confirmation.  Recall that it would be the last 150 years that are surprising.

If the claimed imperial letters truly existed and attested to, then we have documentary records of official notice.

We also now know enough to suspect that some such protocol can be possible, inasmuch as it entails constantly and slowly restoring the cells in the body as an ongoing practice.  We just do not know yet.

Even more compelling, he clearly chose his exit.  His example is a message to us to take this stuff on longetivity quite seriously.  That may well have been his mission.


Every culture has its share of folk legends, and the Chinese are no exception.  One fabled person in Chinese folklore is Li Ching-Yuen, who is rumored to have died in 1933 at the age of 256.


According to locals who knew him, Li Ching-Yuen began gathering medicinal herbs as a young boy, perhaps in a quest for immortality.  For the better part of his life, his diet consisted only of herbs and rice wine.  At the age of 71, Li Ching-Yuen moved to  Kai Xian, where he was hired by the military to teach martial arts.


Master Da Liu, a student of Ching-Yuen, attributed his teacher's longevity to Baguazhang- a form or martial art which said to have been invented by Buddhist and Tao monks.  He was also a practitioner of chi kung (also known as qigong), a type of alternative medicine and meditation which focuses on rythmic breathing.  Mastrer Da Liu, in his 1983 work Taoist Health Exercise Book, quotes Li Ching-Yuen as saying that his longevity was "due to the fact that I performed the exercises every day - regularly, correctly, and with sincerity - for 120 years."


Whether or not Li Ching-Yuen really lived to be 256, the herbalist was quite an amazing character.  He stood at a height of 7 feet, which is enormous even by today's standards.  In his lifetime, he is said to have fathered over two hundred children, and outlived 23 wives.

Li Ching-Yuen died of natural causes on the 6th of May in 1933.  His final words are recorded as: "I have done all I have to do in this world. I will now go home."


While scholars may debate the historical accuracy of Ching-Yuen's date of birth and many details of his legendary life, one thing is certain- the herbalist and teacher did manage to survive to a very old age.  Fortunately for the rest of us, he left behind many rules for living a long, full life.  One such set of rules can be found in a May 15, 1933 issue of Time:

Li Ching-Yuen -- a Chinese herbalist and martial artist -- boasted a lifespan of, by some accounts, 250 or even 256 years; and by more modest reckonings, 199 years. Either way, that's a lot of candles for a birthday cake! When questioned publicly about his secret for long life, he apparently responded with this four-part strategy:

One suspects that there may have been some internal alchemical and herbal components to it, as well ...

Li Ching Yuen was born in 1678 A.D. in Chyi Jiang Hsien, province. Later he immigrated to Kai Hsien, Chen's family field. He died in 1928 A.D., at the age of 250 years. When he was 71 years old, he joined the army of provincial Commander-in-Chief Yeuh Jong-Chyi. Most of his wives died early, so during the course of his life he married fourteen times.

Li was an herbalist, and skilled in Chi Kung and spent much of his life in the mountain ranges. In 1927 General Yang Sen invited Li to his residence in Wann Hsien, province, where a picture was taken of him. Li died the next year when he returned from this trip.

After he died, General Yang investigated Li's background to determine the truth of his story, and later wrote a report about him entitled: "A Factual Account of the 250 Year-Old Good-Luck Man," which was published by the Chinese and Foreign Literature Storehouse, Taipei, Taiwan.

All of the information available indicates that the story is true. Li Ching-Yuen's legacy to us is the fact that it is possible for a human being to live more that 200 years if he or she knows how. Because of this we deeply believe that, if we humbly study and research, the day will come when everyone will live at least 200 years.

I've had the great pleasure of spending time with several qigong teachers who -- in their 70's or 80's -- are as physically vital as most 20 year-old's. This is of course greatly inspiring, and a source of confidence in the effectiveness of the practice, in terms of supporting physical health and vitality.

In each of these cases, however, what was even more apparent was the vitality of their spirit, and the expansive quality of their mind. This energetic Presence, as much or even more than their physical vitality, allowed them to emanate a kind of "eternal youthfulness."
Posted by arclein at 12:00 AM