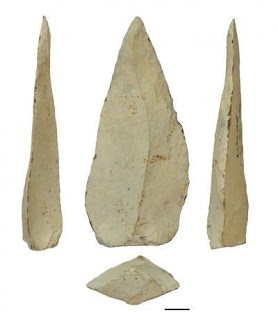 As I have posted in the past, when an archeological discovery is made, the artifacts inevitably are a reflecting a tradition that is already mature and often fully globalized. We only avoid that somewhat when we come to South Africa were they really had first dibs in the human experience.

Here we round up the first good evidence that stone working is at least 500,000 years old. These are spear points and that is a very valuable weapon. Not so much for hunting as to fend of unfriendly carnivores. A spear can take down a lion as has been shown even in historical times.

Taking down game still requires coming up close and personal and a spear can hold them back when they turn on the hunter. Throwing a stone tipped spear would be risky though and the tip would also shatter. The bow ultimately solved that problem. Before that it made more sense to be able to confront exhausted or cornered prey with a hand held defensive weapon.

This is a ~500,000-year-old point from Kathu Pan 1. Multiple lines of evidence from a University of Toronto-led study indicate that points from Kathu Pan 1 were used as hafted spear tips. Scale bar = 1 cm. (Credit: Jayne Wilkins)

Nov. 15, 2012 — A collaborative study involving researchers at Arizona State University, the University of Toronto, and the University of Cape Town found that human ancestors were making stone-tipped weapons 500,000 years ago at the South African archaeological site of Kathu Pan 1 -- 200,000 years earlier than previously thought. This study, "Evidence for Early Hafted Hunting Technology," is published in the November 16 issue of the journal Science.

Attaching stone points to spears (known as "hafting") was an important advance in hunting weaponry for early humans. Hafted tools require more effort and foreplanning to manufacture, but a sharp stone point on the end of a spear can increase its killing power.

"There is a reason that modern bow-hunters tip their arrows with razor-sharp edges. These cutting tips are extremely lethal when compared to the effects from a sharpened stick. Early humans learned this fact earlier than previously thought," said Benjamin Schoville, a coauthor of this study and doctoral student affiliated with the Institute of Human Origins, a research center of the College of Liberal Arts and Sciences at Arizona State University.

Hafted spear tips are common in Stone Age archaeological sites after 300,000 years ago. This study shows that hafted spear tips were also used in the early Middle Pleistocene, a period associated with Homo heidelbergensis, the last common ancestor of Neandertals and modern humans.

"Rather than being invented twice, or by one group learning from the other, stone-tipped spear technology was in place much earlier," said Schoville. "Although both Neandertals and humans used stone-tipped spears, this is the first evidence that this technology originated prior to or near the divergence of these two species."

"It now looks like some of the traits that we associate with modern humans and our nearest relatives can be traced further back in our lineage," said Jayne Wilkins, lead author from the University of Toronto. "This changes the way we think about early human adaptations and capacities before the origin of our own species."

Point function was determined by comparing wear on the ancient points to damage inflicted on modern experimental points used to spear a springbok carcass target with a calibrated crossbow. This method has been used effectively to study weaponry from more recent contexts in the Middle East and southern Africa.

"When points are used as spear tips, there is a lot of damage that forms at the tip of the point, and large distinctive fractures form. The damage on these ancient stone spear points is remarkably similar to those produced with our calibrated crossbow experiment, and we demonstrate they are not easily created from other processes," said coauthor Kyle Brown, a skilled stone tool replicator with the University of Cape Town.

The points were recovered during 1979-1982 excavations by Peter Beaumont of the McGregor Museum, Kimberly, South Africa.

In 2010, a team directed by coauthor Michael Chazan from the University of Toronto reported that the point-bearing deposits at KP1 dated to around 500,000 years ago using optically stimulated luminescence and U-series/electron spin resonance methods. The dating analyses were carried out by Naomi Porat, Geological Survey of Israel, and Rainer Grün, Australian National University.

Funding for this research was provided by the Social Sciences and Humanities Research Council of Canada, the National Science Foundation, and the Hyde Family Foundation, and with important logistical support from the South African Heritage Resources Agency and the McGregor Museum.
The Institute of Human Origins is the leading research organization in the United States devoted to the science of human origins. Embedded within ASU's School of Human Evolution and Social Change, the institute pursues a transdisciplinary strategy for field and analytical paleoanthropological research central to its 30-year-old founding mission -- integrating social, earth, and life science approaches to the most important questions concerning the course, timing, and causes of human evolutionary change over deep time. The institute links to its research activities innovative public outreach programs that create timely, accurate information for education and lay communities.