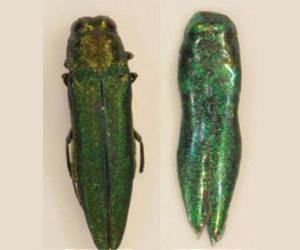 This is a neat trick that hopefully applies to many other insects. Importantly it establishes immediate warning of a pending infestation allowing timely response. Something like this has great promise for field work generally.

It may even allow trees to be inoculated just as they come under attack. This avoids a meaningless late discovery when the tree is beyond saving. Again we see the pressing need for boots on the ground in all wood lots.

Most everything that afflicts a tree usually manifests itself on a single branch whose timely pruning ends the danger. Black rot on a plum tree is a classic example. One or two nips a year is good enough to maintain a healthy tree for years.

In this case going about and setting traps is easy. At least it should suppress the infectation.


As the emerald ash borer ravages North American ash trees, threatening the trees' very survival, a team of entomologists and engineers may have found a way to prevent the spread of the pests.

Emerald ash borers (EABs), a type of beetle native to Asia, first appeared in the U.S. about 20 years ago. They are now moving east from Michigan, killing ash trees on the Eastern Seaboard as far south as North Carolina.

"Within 25 years, practically no ash trees may remain on either side of the St. Lawrence Seaway," said Akhlesh Lakhtakia, Charles Godfrey Binder Professor of Engineering Science and Mechanics at Penn State.

As their name implies, emerald ash borers are iridescent green. The beetles don't carry disease, but their larvae feed on the ash trees' sap, effectively killing the trees by depriving trees of their nourishment.

Thomas C. Baker, Distinguished Professor of Entomology at Penn State, knew that the male EAB locates a mate by flying over an ash tree, finding a female by identifying her green wings, which are folded over her back, and then dropping straight down onto her.

Baker and a post-doctoral fellow in his lab, Michael J. Domingue, were using dead female EABs for bait to trap the male beetles. Dead EAB decoys are not ideal for trapping, said Baker, because they are fragile and can sometimes disappear from the trap.

Baker then learned that Lakhtakia was able to replicate certain biological materials, such as fly eyes and butterfly wings. Baker posed the question: could Lakhtakia's technique visually replicate the unique female borer to create a better lure?

The two researchers, working with a graduate student in Lakhtakia's lab, Drew P. Pulsifer, created a mold of the top of the female beetle's body. The decoy beetle is made by a process of layering polymers with different refractive indexes to create the desired iridescence, and then stamping the resulting material into the mold. The researchers were able to create a color similar to the emerald ash borer's green wings by layering different types of polymer. Eventually they were able to find the right combination of polymers and number of layers in order to refract light and create a color similar to the beetle's own iridescent green. The researchers' findings are scheduled to be published in the April issue of the Journal of Bionic Engineering.

"Akhlesh's technique allows us to present males with different visual stimuli," said Baker, also a faculty member in the University's Huck Institutes of the Life Sciences. "We can manipulate more than that, but right now we are experimentally manipulating the visual decoy."

The researchers had planned a pilot test in central Pennsylvania, but were unable to carry it out due to unfavorable regional weather conditions. They also ran a pilot test in Hungary with a related beetle pest that bores into oak trees. The pilot in Hungary used two controls -- a dead EAB and a decoy made of the polymers, but not molded into the shape of a beetle -- and three types of stamped decoys: one lightly stamped, another with medium force and the final stamped heavily.

"The preliminary indication is that these stamped decoys were 40 percent better than recently dead females in luring and then trapping the males," said Lakhtakia.

The stamped decoys are relatively easy to mass produce, making them both easier to create and maintain and more successful at trapping males than dead female borers.

The purpose of the decoys is to trap the males so that populations of emerald ash borers can be detected in new locations quickly, paving the way for efficient use of other control methods, according to the researchers.

"This is a small dataset, but very encouraging," said Baker, who plans to test the decoys in the U.S. this summer.

Other members of the research team were Beverly G. Post, engineering science and mechanics undergraduate, Penn State; Mahesh S. Narkhede, plastics engineering graduate student and member of the Center for Advanced Materials, and Jayant Kumar, professor of physics and applied physics and director of the Center for Advanced Materials, both at University of Massachusetts Lowell; and Raul J. Martin-Palma, professor of applied physics, Universidad Autonomia de Madrid, Spain.