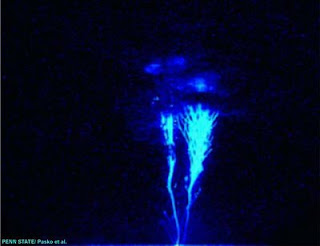 These were not believed until we spotted them from space. They are also obviously rare but
certainly dramatic. The electrical life of our planet is barely mapped or understood moistly because we do not think about it and have no serious illusions in terms of tapping it. The potential though is clearly huge and well worth more thought.

A vertical laser beam with the right frequency could plausibly generate a channel that then taps the actual potential difference. Our problem is to have such a device that is large enough to work.

A rare glimpse of a "gigantic jet" — a huge and mysterious burst of lightning that connects a thunderstorm with the upper atmosphere — was made over China in 2010 and was recently described by scientists.

The gigantic jet took place in eastern China on Aug. 12, 2010 — the farthest a ground-based one has ever been observed from the equator, according to the research team.

Previous jets were mainly seen in tropical or subtropical regions, but this one took place around 35 degrees latitude, about the same as the southern part of Tennessee in the United States.

"This is the first report from mainland China," lead researcher Jing Yang, an atmospheric scientist with the Chinese Academy of Sciences in Beijing, told OurAmazingPlanet. The results were recently published in the Chinese Science Bulletin.

Researchers got a good look at the storm using a variety of tools, including Doppler radar data and weather pictures in the infrared band of radiation.

The gigantic jet peaked at about 55 miles (89 kilometers) above the ground, far above the cloudtops that were measured with Doppler radar at an altitude of 11 miles (17 km).

Yang added that her team had possibly seen another gigantic jet in the same area during a different thunderstorm, but said they needed to recheck the data to confirm.

"It's not as clear as this one if it is a gigantic jet or not," she said.

It wasn't until the last century that electrical activity above thunderclouds was scientifically proven, although rumors based on undocumented observations circulated long before that time.

These electrical discharges can take several forms, such as sprites (orange-red flashes) and blue jets, which appear as blue cones.

The first confirmed gigantic jet was reported in 2001, after American researchers saw a blue jet reaching 44 miles (70 km) above the clouds at the Arecibo Observatory in Puerto Rico. This was nearly double the 26-mile (42 km) limit for jets that was previously observed.

Two years later, researchers described shapes such as "tree jets" and "carrot jets" that they spotted during a 2002 thunderstorm over the South China Sea near the Philippines.

While scientists are still trying to understand how these gigantic jets work, they believe the jets balance out the electrical charge during thunderstorms by discharging the ionosphere — a part of the upper atmosphere filled with charged particles.