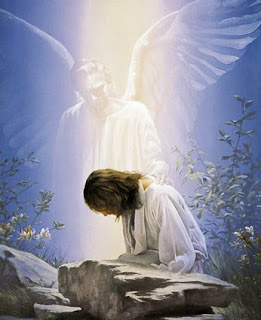 Quite simply, if you have never had a comparable experience, then it is hard to credit this type of report. However, observe something here. The individual received a clear message and acted to actually change the normal outcome in the first instance. The second is not as clear and gains credence only in light of the first as a comparable.

I personally have experienced the equivalent of the first instance. Other situations that can be best described as ambivalent have also occurred but lack clarity. In the first instance though, I was approaching a heavily traveled intersection on the center lane to pull up along side an already stopped vehicle and would inevitably have pulled up to the stop line as taught.

I suddenly received notice to stop short, which is immediately did by a full car length and a half. I have never done this before or since and the truth be told, I then to push too far forward. A second later a speeding vehicle shot in from my right and from behind a large building that blinded the approach and careened around my corner while cutting through what would have been my space.

That occurred as I was returning home from the hospital on the night my son was born.

We can assign this effect to a guardian angel or perhaps more simply to short term premonition. The more ambiguous stories look more like the guardian angel syndrome which is something that I cannot say that I have ever discerned. The actual voicing of a warning certainly suggests as much.

Twice in my life I was saved from physical harm by my guardian angel. The first time occurred at the age of 13. My father picked me up from Saturday classes, and since my mother was not present, I was going to sit up front next to him. Suddenly, I heard a voice in my head, a mind-voice so to speak command me to "Sit in the back!" Good thing I did, because five minutes later we were in a car accident. Had I been sitting in the front passenger seat, I would have gone through the windshield, because the car was not equipped with seat belts, as this was 1969. I was sitting in the back right passenger seat, and I sustained minor injuries. The next encounter occurred seven years later. I was walking down a street on the way to a hospital where my mother had been on duty as a nurse. It was an early winter evening, and I planned to wait for my mother until she went off duty later that night. As I was walking, a car with three young men slowed up. The man in the front passenger seat began to yell at me and spit at me. This was New York City, Queens, and it was during the time of the "Son of Sam" murders. I was extremely frightened. I kept my head down and walked hurriedly, just hoping I would make it to the hospital. Suddenly, I felt a warm and loving presence wrap itself around me. It was so beautiful, truly loving. It felt like a huge pair of wings. I knew I was safe. The feeling stayed with me until I stepped over the threshold of the hospital. In that instant it disappeared. Needless to say, I spent the rest of the evening in the waiting room just contemplating what had happened to me. To this day I will never forget that wonderful, protected and loving feeling. Anonymus
Posted by arclein at 12:00 AM