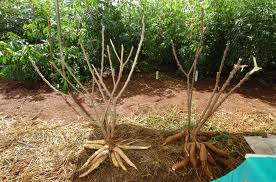 This item introduces us to the benefits of cassava generally. The modern world is seeing these plants in our supermarkets without much help in deciding what to do with them. My own experience tells me that any new product has to be tried and tested at least three times before we get it right. This may help.

I suspect that we will be seeing much more of this plant and its derivatives as we master the art of its use. I also think that food science can do wonders here to make attractive products.

It certainly has more uses than as a pudding.

(NaturalNews) Cassava or yucca is a nutty flavored, starchy tuber of the spurge family (Euphorbiaceae) from the South-American origin. This sweet, crunchy underground tuber has been a popular edible root for centuries in many parts of Africa, Asia and South America; it is an indispensable part of the carbohydrate diet of millions of inhabitants living in these regions.


Cassava can grow in poor soil and can withstand drought. It is an important famine reserve crop in countries with unreliable rainfall. According to the Food and Agriculture Organization of the United Nations Global Cassava Development Strategy, cassava is the third most important source of calories in the tropics, after rice and corn. Millions of people depend on cassava in Africa, Asia and Latin America. It is grown by poor farmers, many of them women, often on marginal land. This crop is vital for both food security and income generation.

Cassava has nearly twice the calories than potatoes, perhaps highest for any tropical starch-rich tubers and roots. Like other roots and tubers, cassava too is free from gluten. Young, tender cassava (yucca) leaves are a good source of dietary proteins and vitamin K. Vitamin K has a suspected role in bone mass building by promoting osteotrophic activity in the bones. It also has an established role in the treatment of Alzheimer's disease patients by limiting neuronal damage in the brain. Cassava is a moderate source of some of the valuable B-complex group of vitamins such as folates, thiamin, pyridoxine (vitamin B-6), riboflavin, and pantothenic acid. The root is the chief source of some important minerals like zinc, magnesium, copper, iron, and manganese for many inhabitants in the tropical belts. In addition, it has adequate amounts of potassium (271 mg per 100 grams or six percent of RDA). Potassium is an important component of cell and body fluids that help regulate heart rate and blood pressure. Other health benefits cassava is linked to are: increased immune function, DNA repair and protection, reduced frequency of migraines, relief from PMS, epileptic seizures, and alopecia.

In saucepan, bring water to boil. Use whisk or fork to add tapioca (this prevents them from sticking together. Let the pearls cook for about 17 minutes or until they have lost their opaque appearance stirring with a whisk. The mixture should be slightly thickened and the liquid cloudy. In a separate bowl, whisk the honey granules, salt, and milk. When the tapioca has finished cooking, whisk in milk mixture, stir, and cook for 10 more minutes. Place contents in a greased glass casserole pan at 350 degrees and cook for one and a half hours stirring every 15-20 minutes.

Eric is a peer-reviewed, published researcher. His work on heart disease and autism has been accepted internationally at various scientific conferences through organizations like the American Public Health Association and Australian-based Baker IDI Heart and Diabetes Institute. Visit his blog. Track his work on facebook. Read Eric's other naturalnews.com articles.