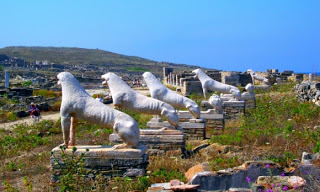 This is pay dirt. We have two or three separate photos of the same creature and its conforms to my expectations for a Giant Sloth. They also immediately recall our Bronze Age stone sculptures from the island of Delos in the Aegean. From them we already knew that our Giant Sloth did not sport a giant belly.

Once again, no others are actually identifying this creature except to observe what it is clearly not. It is certainly not anything we know and most surely it is not a guy in a monkey suit.

We have now shifted out almost a dozen separate reports that strongly characterize this creature. Its existence needs to be publicized so the eyeballs in the woods know what to watch for. They are very much alive and prospering in the Appalachians at least and likely in the western mountains. This means that their actual range could be in the forests almost everywhere, although the prevalence of Appalachian sightings suggests otherwise.

They are really not that hard to encounter and be mistaken for a bear. These photos capture the long sloth like limbs. 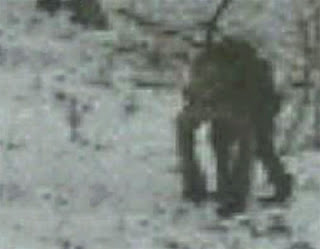 Another Unknown Creature in Pennsylvania

A woman named Polly posted an unusual photo on her Facebook account a few days ago. Since then, it's been identified as a Bigfoot, troll, bear, gorilla, etc. Anyway...Polly posted this blurb with the photo:
A friend of mine lives in Pennsylvania and saw this as she called her dogs in. She was scared, because it didnt run off. She has 2 big black chows. We think she saw a baby sasquatch. And that is what she thinks also, because she has never seen anything like this. She knows what a bear looks like, and she said it looked like a little gorilla. - Polly The exact location was not given. I realized it's highly pixalized. So...give it your best shot. What is it?

Here are a few more photos of unknown creatures from the Keystone State:

It's a chimpanzee. Many pet chimps have gone feral in N. America.

maybe yet the back is arced way too high. It would also be nice to know tee size in order to get the scaling.

Otherwise a plausible explanation which adds another option to the check list besides bear.

The giant sloth was typically huge and the smaller candidates need to closely checked out.

I think I've found a good photo of this ground sloth :