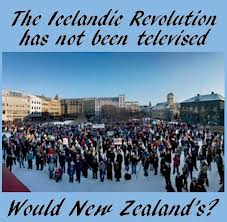 The reason that you indict bankers is because it informs the next generation who must be given the same power to make loans, that the price of fraud is real and substantial. Today. Iceland has a reformed banking system and a thriving economy largely making up its past losses and growing nicely.

Those in the USA and Europe who also face prison for their behavior, also control or deeply influence media. They certainly do not welcome this story as it informs the population that there is an alternative to present behavior.

Iceland is a growing success story, as for that matter is North Dakota and Canada and much of the rest of the world who operates prudent banking regulation.

All of USA recent economic failure is a direct result of demand destruction caused by reckless banking regulation. The same holds partially true in the euro zone in which political meddling weakened those same regulation. Let m,e make it really simple. Bad regulation is initially highly profitable. Yet the internal reality is an average return we will call x over time. Thus a regulation change that allows you to balloon profits means that you will absorb a counter loss later. Because you are not manufacturing wealth you are playing a nearly zero sum game.

USA demand is now beginning to recover. That is the good news. Yet the regulatory regime has hardly been addressed. This means some form of repeat is possible in some form or the other though not necessarily in sub primes mortgages but likely in high yield securities. That almost begins as a wild horse. Target year for another financial collapse will be around 2024. It will still be real estate heavy of course.

Why Did The Media Keep The Recent Peaceful Icelandic Revolution Quiet?


Did you know about the peaceful Icelandic revolution that took place over the last 5 years? If you didn’t, it is likely because it was never televised or talked about very much at all on mainstream news. One would have to be part of the right websites or Facebook pages to even find out that this has been going on. Why is this the case? Why keep something so monumental hidden from the public?

First let’s discuss what took place with this revolution, then it will become much more clear as to why this was never televised.

It was during a time of a lot of financial turmoil around the world and stories were popping up all over the news of how banks around the world had been crushing or minimizing rebellions by receiving massive bailouts to keep them alive. The Iceland story is different because there was no crushing or ending the rebellion, instead, the people rose up. This is why this was not seen on TV anywhere. If the rest of the world knew that the people won, it may give them some ideas.

During the financial turmoil of 2008 and 2009, the people of Iceland forced their government and banks to resign. How did they do this? Peacefully. The following is a summation of what steps they took over a process of several years, and it all began with each one of them realizing this couldn’t continue.

2008 – The main bank of Iceland is nationalized. The Krona, the currency of Iceland devaluates and the stock market halts. The country is in bankruptcy.

2008 – Citizens rise up at Parliament and succeed in forcing the resignation of both the prime minister and the effective government. New elections are held. Yet, the country remains in a bad economic situation. A Parliament act is passed to pay back 3,500 million Euros to Great Britain and Holland by the people of Iceland monthly during the next 15 years, with 5.5% interest.

2010 – The people of Iceland again take to the streets to demand a referendum. In January of 2010, the President of Iceland denies approval, instead announcing a popular vote on the matter by the people.

In March, a referendum and denial of payment is approved by popular vote of 93%. Meanwhile, government officials initiate an investigation to bring to justice those responsible for the crisis. Many high level executives and bankers are arrested. Interpol dictates an order to force all implicated parties to leave Iceland.

An assembly is elected to write a new constitution (based on that of Denmark) to avoid entrapments of debt based currency foreign loans. 25 citizens are chosen — with no political affiliation — out of the 522 candidates. The only qualifications for candidacy are adulthood and the support of 30 people. The constitutional assembly started in February of 2011. It continues to present ‘carta magna’ from recommendations provided by various assemblies throughout the country. Ultimately, it must be approved by both the current Parliament and the one created through the next legislative election.

It’s quite a story isn’t it? You can most definitely see at this point why this was not covered in newspapers, on radio networks and on television. Imagine seeing this story on TV several times each day wherever you live in the world; do you think the people would start to get ideas? Maybe try the same thing? Most definitely. There is always a constant push of fear, murders, anger, government success,health fallacies and false information, but never do we hear of stories that could be a threat to the system.

Another key factor of this revolution that we have to look at is that it did not come from a place of violence, bloodshed or anger. No guns or fighting! It was simply people getting together peacefully and working things out. This is something this entire world is capable of but believes is impossible. Humanity has been so programmed to give itself little credit in this department. We always hear about how we need to be governed, there are too many crazy people out there, we need a big brother keeping control. The truth is, without the confines and certain rules the system employs, we would be a much more peaceful people mainly because we are no longer acting in survival mode. Now I am not here to say that the system is the only issue because it isn’t, our programming is also very strong in what we have been taught and believe about ourselves. I am simply here to say, this programming can be broken and our consciousness can and is changing.

I also thought it was a big step to see Iceland employ a new means of choosing its leaders. Someone who is an adult and has 30 people supporting them can run. This is great as the only reason why we have educated politicians today is because the elite needs to know that these people are programmed to repeat this system. Generally they also have to have corporate affiliations as well so they know they can be controlled by money.

Now Iceland is proceeding to actually prosecute some of their formerly most powerful bankers and the Icelandic special prosecutor has stated that it very well may indict some 90 people. Meanwhile, over 200 people, including the former chief executives of Iceland’s three biggest banks, face criminal charges for their activities. While I don’t agree with the judgment factor being used here, I understand that this is the step they feel right in taking.

Hopefully more countries around the world begin to follow suit!

granted that the economist does not tell you when Madona had her last period, but people with and IQ well into the triple digits think of the weekly magazine "The Economist" as mainstream press. ON their site do a search on Iceland and recovery
This was one result
http://www.economist.com/blogs/freeexchange/2012/07/crisis-and-recovery