39 Birds of Paradise from Cornell 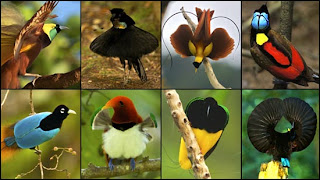 This is a gorgeous treat been put together out of Cornell and worth the viewing. It captures all 39 species of the bird of paradise for viewing in one place.


Ithaca, N.Y.–Thirty-nine of the most extraordinary birds in the world are flying into living rooms and classrooms this week as a new educational website debuts from the Cornell Lab of Ornithology.

With 35 high-definition videos as a centerpiece, the Birds-of-Paradise Project site amazes viewers with full-frame footage of the gorgeous birds—and then explores the scientific principles that led such spectacular creatures to evolve. The site offers more than two hours of never-before-seen footage, plus images, sounds, and interactive features. Free, downloadable lesson plans, developed by the Cornell Lab's BirdSleuth K-12 program, enable teachers to use the website to meet Framework for K-12 Science Education expectations.

The project leaders, Ed Scholes and Tim Laman, personally guide viewers through the building blocks of bird-of-paradise displays, bringing to light the unique set of rules that guided their evolution. The collection of videos provides one of the most thorough and detailed examinations of any group of animals, ever.

“Birds-of-paradise are the world’s most spectacular examples of evolution by sexual selection,” said Scholes, a research associate at the Cornell Lab. “Even though I was there when we filmed the displays, when I watched the playback I was floored by all the details I could see. Right then Tim and I knew we wanted to share it with people.”

“So few people outside of New Guinea ever get a chance to see these birds,” said Laman, a biologist and National Geographic photojournalist. “With this website, it’s like you’re sitting in a blind with Ed and me, just a few feet from where these outrageous-looking birds are doing their crazy dances.”

The clips capture the birds' ability to transform themselves in the blink of an eye. In one video, two male Greater Birds-of-Paradise gallop to and fro on a bare branch in the canopy, filling the air with a shrill honking. All at once they freeze, heads down, spreading their chestnut wings and fanning vivid yellow plumes over their backs. A brownish female chooses one and moves in for a close inspection.

In another clip, a rather plain black bird stands on a log. Moments later, this Superb Bird-of-Paradise unfolds a triangular, electric-blue chest shield and fans its body feathers into a jet-black oval background. The familiar shape of a bird disappears, replaced by a “psychedelic smiley face” that bobs up and down as the bird hops in front of a female. Other species possess equally strange and beautiful displays, many of them documented here for the first time in high-definition video.

The website, videos, and interactive features were produced by the Cornell Lab’s Multimedia program with sound and video from the archives of the Lab’s Macaulay Library. Producer Marc Dantzker said the production team sorted through more than 2,500 video clips, almost 40,000 photos, and hundreds of sound recordings to find close-up examples of each adaptation, courtship pose, display feather, and dance move.

“What’s great about this project is that finally we can illustrate some fascinating aspects of evolution using these absolutely stunning examples,” Dantzker said. “Ed and Tim’s ground-breaking footage allows us to get to the heart of those stories with incredible detail and unforgettable imagery.”

The site is the newest phase of the Birds-of-Paradise Project, an ambitious eight-year undertaking by Scholes and Laman to photographically document all 39 species of birds-of-paradise for the first time. The famous birds are native to New Guinea, surrounding islands, and a few parts of Australia. They have inspired wonder among scientists and the lay public ever since their discovery by members of Ferdinand Magellan’s crew in the sixteenth century.

Components of the site (www.BirdsofParadiseProject.org) include: