Why Are Food Prices So High? 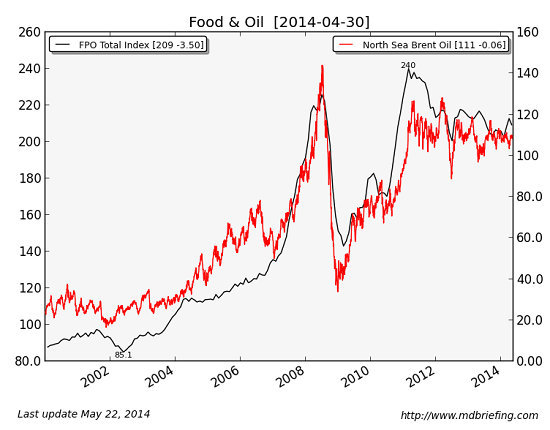 The core insight is one that I have understood for years and know that direct energy costs drive pricing in the economy generally and for food the most directly.  Everything else is nonsense.  Thus what we have is hidden cost driven inflation that has nothing to do with money inflation.

In fact there are huge masses of money out there looking for a home that simply cannot get it.  Worse than that it is not going to get better.  All the accepted capital investments out there are already maxed out.  The Oil sands and the Fracking business are excellent examples of massive capital chasing an extremely high risk business endeavor.  They do not think so of course but if have been following my blog you know something important.  The energy equation is about to completely dissolve.

Grid power will be fuel free and cheap and brake horsepower will also be free.  Worse, none of it will require anything particularly exotic.  Once demonstrated, every engineer will be ripping both off.

Thus what we are watching and suffering through is a huge energy price distortion brought about too much capital causing a massive shift into new methods which precipitates a collapse of the old economic regime.  The real global bubble will be known as the great oil bubble.

Why Are Food Prices So High?

Regardless of what we eat, we're actually eating oil.

Anyone who buys their own groceries (as opposed to having a full-time cook handle such mundane chores) knows that the cost of basic foods keeps rising, despite the official claims that inflation is essentially near-zero.

Common-sense causes include severe weather and droughts than reduce crop yields, rising demand from the increasingly wealthy global middle class and money printing, which devalues the purchasing power of income.

While these factors undoubtedly influence the cost of food, it turns out that food moves in virtual lockstep with the one master commodity in an industrialized global economy: oil. Courtesy of our friends at Market Daily Briefing, here is a chart of a basket of basic foodstuffs and Brent Crude Oil:

In other words, regardless of what we eat, we're actually eating oil. Not directly, of course, but indirectly, as the global production of tradable foods relies on mechanized farming, fertilizers derived from fossil fuel feedstocks, transport of the harvest to processing plants and from there, to final customers.

Even more indirectly, it took enormous quantities of fossil-fuel energy to construct the aircraft that fly delicacies halfway around the world, the ships that carry cacao beans and grain, the trucks that transport produce and the roads that enable fast, reliable delivery of perishables.

While money creation is one influence on commodity prices, supply and demand matter, too; in that sense, money printing only matters if it pushes demand higher while constricting supply.

Other observers use gold as the "you can't print this" metric of price. In other words, rather than price grain in dollars, yuan, yen or euros, we calculate the cost of grain in ounces of gold.

The gold/food ratio is around the level it reached in 2009 after spiking in 2008.

This tells us food is cheap when priced in gold compared to 2002, but it's more expensive (priced in gold) than it was at gold's peak in 2012.

In effect, the influences of monetary inflation and supply/demand show up in food via the price of oil. Until we stop eating oil (10 calories of fossil fuels are consumed to put one calorie of food on the table), oil is the master commodity in the cost of food.

So there's too much capital. "The Oil sands and the Fracking business are excellent examples of massive capital chasing an extremely high risk business endeavor." But this has nothing to do with the money supply??????????? You need to read a little econ 101, big guy. Inflation is always and everywhere a monetary phenomenon. Even Milton "withholding tax" Friedman got that one right.