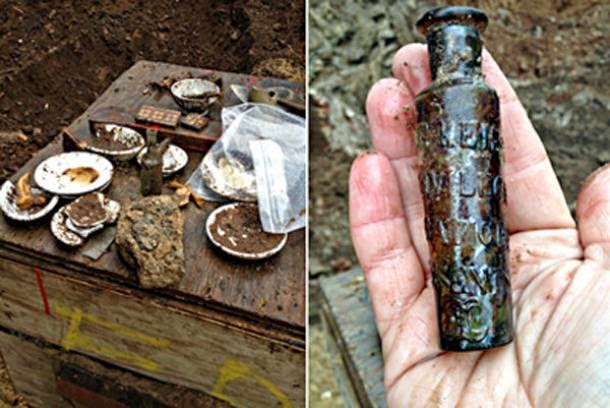 It could be said that this was more for fun than any practical reason. But the history does show a long lasting interest and serious claims been made. I suspect that vtnhe interest was well grounded in ancient practice and a real elixir. Work today in this field is plausibly drawing close to such a concoction.

It is certainly not to be deemed impossible and may well be plausible. As well we have a scattering of recent evidence supporting this theme that come with excellent credentials. It may well not be that difficult in practice. At least now I see work ongoing.


Our own civilization needs such a concoction in order to take a long collective breathe and sort out how to actually manage a real civilization.

Beneath a construction site for a glassy, 22-story hotel in New York, archaeologists unearthed a history of drinking, eating and lodging, along with a tradition of consuming cure-alls and potions for good health, according to a report in DNA Info.


The discovery included a two hundred-year-old glass bottle that once contained the “Elixir of Long Life”.  Now the research team have tracked down the original German recipe used to create the elixir for fending off death. “We decided to engage in our own brand of experimental archaeology,” said Alyssa Loorya, the president of Chrysalis, a company regularly hired by the city to oversee excavation projects.


Loorya enlisted researchers in Germany to track down the recipe in an old medical guide, which revealed that the potion contained ingredients such as aloe, which is anti-inflammatory, gentian root, which aids digestion, as well as rhubarb, zedoary, and Spanish saffron – ingredients still used by herbalists today. The raw ingredients for an ‘Elixir of Long Life’.


Photo credit: DNAinfo/Irene Plagianos In addition to the Elixir of Long Life, archaeologists also discovered two bottles of Dr Hostetters Stomach Bitters, a once-popular 19th century medicine, which contained a complex mixture of ingredients including Peruvian bark, which has malaria-fighting properties, and gum kino, a kind of tree sap that is antibacterial.


Loorya and her team are have recreated both types of elixir, which they say taste very bitter.  The search for the Elixir of Life has been the supreme quest for many.  In medieval times, there are accounts of the alchemists looking for the philosopher’s stone, believed to be required to create the elixir but also to convert lead to gold. Bernard Trevisan, an alchemist of the 15th century said that dropping the philosopher’s stone into mercurial water would create the elixir, and we have multiple cases of alchemists who claim to have found the Elixir of Life, including the infamous Cagliostro or Saint Germain.


Images depicting the Elixir of Long Life Ancient references to immortality, or extremely long life spans, can be traced back thousands of years. The 4,000-year-old Sumerian King’s List, for example, refer to rulers who reigned for tens of thousands of years. Even the Bible refers to individuals who lived for hundreds of years, prior to the ‘Great Flood’. Ancient myths and legends from numerous cultures around the world refer to special food or drink that were reserved for the ‘gods’ and kept them immortal.


For the Greek gods it was ambrosia and nectar, in Zoroastrian and Vedic mythologies, we can see reference to a special drink known as Soma and Haoma respectively. In Egyptian mythology, Thoth and Hermes drank ‘white drops’ and ‘liquid gold’, which were said to keep them immortal.


In Sumerian texts, we have references to the Ninhursag’s milk, which was drunk by the kings of ancient Sumer.


In the Hindu religion, the gods would harness a milk called Amrita, a nectar that was collected and drunk by the gods to give them immortality, but forbidden for humans to drink.

In Chinese mythology, we have the ‘peaches of immortality’. Are all these references simply the imagination of our ancient ancestors? Or were their cultures that really achieved significant longevity? Perhaps there is at least some truth behind the Elixir of Long Life…
Posted by arclein at 12:00 AM