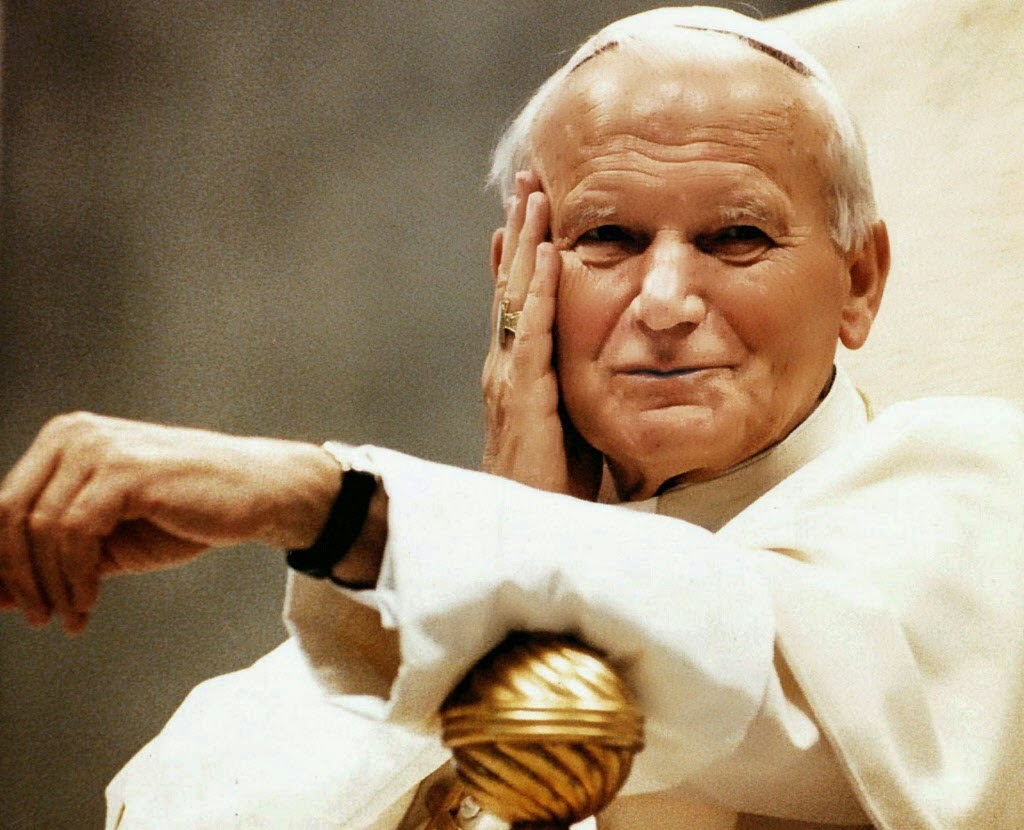 This item speaks to something that we all need to pay attention to. Fundamental ideas regarding man and man's relation to God now have global reach and are been informed by fresh revelation and organizing ideas.


What Karol Wojtyla does for us here is clearly spell out the most general intellectual framework to approach this developing challenge. There is the Church holding out the ideal and promoting its attainment as our human birthright against secular, religious and ideological opposition that succumbs easily to following an anti Church sophistry.


Because these currents have become global and have become naturally persuasive, the scope for random mob action is increasing and must be considered serious.


There is now enough empirical information developing regarding the reality of the afterlife to easily inform a suddenly rising consensus. At some time, this will go viral and we can expect a huge resurgence in religiosity. The rapidly developing science around Near Death Experiences is one good example. When does the population actually accept the reality outright?


Right now the whole Anti Church paradigm depends completely on pure denial. This is actually the equivalent to the anti Bigfoot position in the face of literally 10,000 individual observations.


The Final Confrontation will be between acceptance of the Human Ideal for a Human Life versus its outright denial for mostly selfish reasons. It is a strange perception to have

"We must be prepared to undergo great trials in the not-too-distant future; trials that will require us to be ready to give up even our lives, and a total gift of self to Christ and for Christ. Through your prayers and mine, it is possible to alleviate this tribulation, but it is no longer possible to avert it... How many times has the renewal of the Church been brought about in blood! It will not be different this time."

As someone who has written a good deal about Alinskyian organizing, I am often confronted with one of two errors.  The first is that “social justice” means something bad – or, at the very least, that the Church has no business involved with it.  The second is that Alinskyian organizing is just like – oh, say – the Solidarity movement in Poland of which the Church was pivotally supportive.

The documentary Messenger of Truth, which follows the work of Blessed Father JerzyPopieluszko in support of Solidarity, the non-government-sanctioned union led by LechWałęsa that was instrumental in breaking Communist control of Poland, brilliantly clarifies these issues.  Not only is the Church rightly concerned with the welfare – in all its many aspects – of a society but it is most effective when being itself.  To be piously Catholic, in other words, is an intrinsic challenge to unjust social structures.  Nothing more is required.

Pious Catholicism isn’t static and it isn’t safe.  It stands in diametrical contradiction to modern ideas about social order: “It is the essence of the Communist regime – it is a totalitarian regime – because it wants to control all aspects of a person’s life, including your thoughts, your ideas,” says Grazyna Sikorska, author of A Martyr for Truth, a biography of Father Popieluszko. “You rely on the State for everything in your life.”

The Catholic’s thoughts and ideas, by contrast, are directed toward God, relying on Him alone.   From Roman Caesars demanding an offering of incense to contemporary governments demanding silence about their moral abuses, the existence of a believing Christian is an act of contradiction.

Explaining why there are so many Christian martyrs.
Father Popieluszko was ordained a priest in Communist Poland.  In summer of 1980, while serving the parish church of St. Stanislaw Kostka in Warsaw, the striking workers of the Lenin Shipyards in Gdańsk, some 250 miles north, begged to be sent a priest to say Mass for them.   When the priest chosen for the task was unable to go, Father Popieluszko volunteered.

The first priest to pass through the gate of the steelworks, his presence there was understood symbolically – a victory for “the Church, which had been patiently knocking at the gates of Polish factories for thirty long years,” in Father’s words.  He began to celebrate Mass for the striking workers weekly, in his Warsaw parish church, and organized a monthly Workmen Fellowship for prayer, preaching, and a lecture series on a broad range of subjects, including Polish literature, history, the Church’s teaching about social science, law, economics, and even negotiation techniques.

Needless to say, Solidarity’s support among the Polish people and its relationship to the Church, were a cause of tremendous concern to the Communists.  It imposed martial law to stop the “virus” of Solidarity and arrested about 5000 key Solidarity workers, leaving their families without livelihood.

Father Popieluszko urged non-violence and countered by organizing relief services for the affected families.  A monthly “Mass for the Homeland” drew crowds of thousands to St.  Stanislaw Kostka where they listened to sermons that were taped and disseminated throughout Poland with the help of Radio Free Europe.  The military police called these masses “séances of hate,” harassing and threatening Father at first and then later arresting and interrogating him, but refraining from assassination until 1984.

“Love has a price,” Father wrote for the sermon he was unable to deliver, as he had been beaten to death and his body thrown into the Vistula Water Reservoir.  “Lies are for little people.  Truth is immortal.  Lies die a quick death.”

And in another recording, he said: “It seems to me that in the history of the Church, in the history of Christianity, there are many examples showing to what extent you have to go to defend the truth.  You have to defend it to the end.  Jesus Christ sacrificed his life in order to announce his divine truth.  Likewise, the apostles sacrificed their lives.  Therefore the role of the priest is to proclaim the truth and suffer for the truth…if necessary, even to die for the truth.”

So how does the Solidarity movement, supported in practical ways by the Church, differ from Alinskyian“faith-based” organizing?  Don’t they both concern an organized people?  Aren’t they both concerned about fighting – non-violently – for social justice?

The answer is that Solidarity wasn’t using the Church to give it validity.  The Church supported it because the members of Solidarity were enslaved by a State operating under the spell of an intrinsically evil ideology.  Manipulating Catholics to (say) support a given piece of educational reform – one, ironically, that is in the service of the same ideology Solidarity opposed – is the mirror opposite of the Church’s efforts to support fundamental human freedoms.

The Workers Fellowships weren’t designed to school its participants in “self interest” and socialist politics – re-educating them in a new set of values; they were designed to elevate the soul’s spiritual and intellectual life, drawing it more deeply into authentic Catholicism.

Messenger of Truth couldn’t be a timelier reminder that this battle isn’t over.  Blessed Father Jerzy Popieluszko, pray for us.

Spero columnist Stephanie Block is the author of the four-volume 'Change Agents: Alinskyian Organizing Among Religious Bodies', available at Amazon.