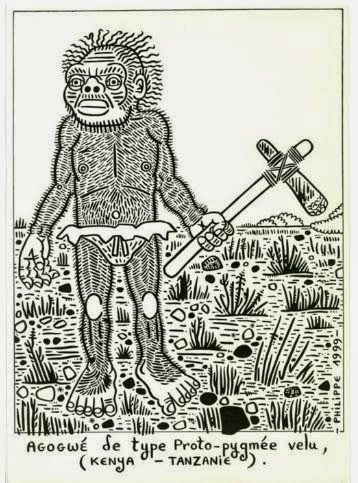 With the discovery of fossils in Indonesia and additional occurrences even in the Appalachians, we now have this report that places our hominid directly in its presumed homeland. It appears time to characterize these scant reports.

1 The creature is principally forest adapted and does not obviously stray far from this source of cover. It is also likely nocturnal as well to take advantage of the same conditions as most other hunters. Alternatively, they would have been easily exposed to human eyes otherwise, even in the forest.
2 As usual it will be nocturnal. Everything else is except us and the bears.
3 The population is small and based on a family troop and often presents as a family only. This is similar to the Sasquatch.
4 The trackage is human like and has not led to any form of recognition.
5 It sports a coat t.hat is often russet colored or brown and generally unusual enough to draw attention. In this regard and generally it conforms to the Sasquatch. It becomes plausible to speculate that humanity cross bred with such a creature to produce the more robust Sasquatch.
6 The fossil record supports the existence of such a creature. Again its biome also fails to overlap with ours.
We have reason to think that this creature has been extant for millions of years, rather than the scant 200,000 years that we ascribe to humanity. That it may well still exist is quite reasonable as we never conflicted for resources at all.
We have already collected a number of sightings and these are excellent. Again all such observations are profoundly local in nature and follow up is difficult and expensive. They will never cooperate either.


Agogwe: Little Men of the Forest


The Agogwe is a rust-colored, downy-haired, 1 to 1.7 meters (2-5 feet) tall unknown biped reported throughout east Africa. Said to have yellowish, reddish skin underneath hair, the Agogwe allegedly inhabits the forest of this remote region.


One of the best known sightings occurred near the turn of the nineteenth century when Capt. William Hichens was sent on an official lion hunt to this region. While there, waiting in a forest clearing for a big cat, he witnessed the bipeds, which he later described in the December 1937 issue of the London magazine Discovery:


“Some years ago I was sent on an official lion hunt in this area. While waiting in a forest glade for a man eater, I saw two small, brown, furry creatures come from the dense forest on one side of the glade and then disappear into the thicket on the other side. They where like little men, about 4 feet high, walking upright, but clad in russet hair. The native hunter with me gazed in mingled fear and amazement."


In support of Hichens’s story, Cuthbert Burgoyne wrote a letter to Discovery in 1938, noting that he and his wife had seen something similar while coasting Portuguese East Africa [known today as Mozambique] in a Japanese cargo boat in 1927:


“We were sufficiently near to land to see objects clearly with a glass of twelve magnifications. There was a sloping beach with light bush above upon which several dozen baboons where hunting for and picking up shell fish of crabs, to judge by their movements. Two pure white baboons were amongst them. These are very rare but I had heard of them previously. As we watched, two little brown men walked together out of the bush and down amongst the baboons. They were certainly not any known monkey and yet they must have been akin or they would have disturbed the baboons. They were too far away to be seen in great detail, but these small human-like animals were probably between four and five feet tall, quite upright and graceful in figure. At the time I was thrilled as they were quite evidently no beast of which I had heard or read. Later a friend and big game hunter told me he was in Portuguese East Africa with his wife and three other hunters, and saw mother, father and child, of apparently similar animal species, walk across the further side of a bush clearing. The natives loudly forbade him to shoot.”


In the late 1950s, the third sighting was reported, this time it being Charles Cordier, a professional animal collector who allegedly saw the Agogwe in Zaire. It was entangled in one of the bird snares that he had set but escaped before he could do anything, as he said:


“It fell on it face, turned over, sat up, took the noose off its feet, and walked way before the nearby African could do anything.”

These beings are known by a variety of names throughout Africa, including in the Congo, they are called kakundakári; in central Africa as amajungi or niaka-ambuguza; in East Africa as agogwe, doko, mau, or mberikimo; in southern Africa as chimanimani or tokoleshe; and in West Africa as abonesi, ijiméré, or séhité. Various attention has been given to these reports in different decades. There were other widespread reports of reddish-haired séhité in 1940s’ Ivory Coast, where there were no known pygmies at all.


British primatologist W. C. Osman Hill, when talking about similar hominids in South Asia, the nittaewo of Sri Lanka (formerly Ceylon), felt they were a small form of Homo erectus. Scottish-American zoologist Ivan T. Sanderson considered that some proto-pygmies might simply be unclassified pygmy Homo sapiens who have retreated into the rainforests and tropical mountain valleys of Africa or Asia. The French zoologist Bernard Heuvelmans considered the small African creatures may be proto-pygmies, proto-bushmen, or australopithecine (gracile species). On the Track of Unknown Animals Heuvelmans commented:

“Now there is no known ape, even among the anthropoids, which normally walks upright on its hind legs. Perhaps the agogwe are therefore really little men.”


Being that the Agogwe reportedly lives in the dense remote forest regions of Eastern Africa, no formal expeditions have been launched to locate this rare creature. Because of this there has been no physical evidence collected to support the existence of the Agogwe.


Unknown Creatures - Over 50 of the most documented creatures of Cryptozoology
Posted by arclein at 12:00 AM