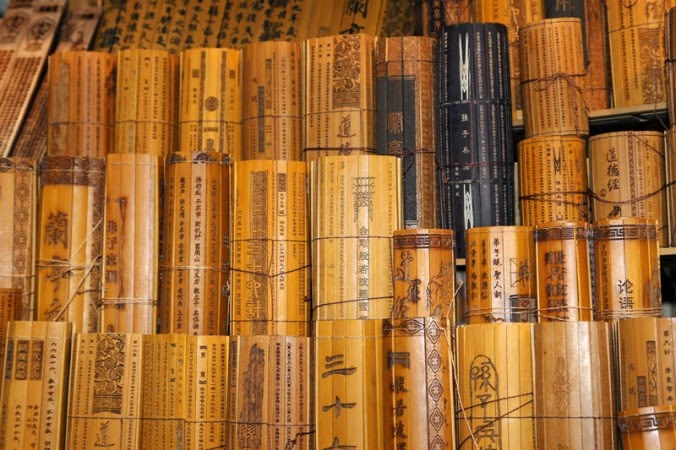 This is a wonderful story that will surely promote plenty of additional excavation.  Yet it is only around two thousand years old.  It continues to be difficult to originate sources that date before three thousand years and these may simply have never properly existed.  I am forever hopeful.

Alchemical works appear to also largely originate from the same third millennia and are still been pieced together and interpreted.  Whatever has been reported to me so far has been particularly influential mostly because it revealed empirical results that then triggered a reevaluation of the problem of modeling elements.

Ancient medical information often has the same allure in that it often triggers fresh insight.  After all when you are hunting the snipe, your map has finite data points and an assemblage of assumptions for explanations.   Enter another set of explanations just as well argued and magically a lot of dross evaporates.  This is a useful technique that prevents many wild goose chases.

Last year, archaeologists unearthed 920 bamboo strips at a construction site in the south-western city of Chengdu in China, containing recipes for treating ailments that date back 2,000 years. The bamboo strips, which were once widely used as a writing material, were reportedly found along with other relics of the Western Han Dynasty, which came to power in 260 BC. Archaeologists speculated that the traditional Chinese remedies may have been written by the successors of Bian Que, reported to be China’s earliest known physician. Now further testing has confirmed that the texts were written by Bian Que himself, according to a news report in ecns.cn. Translation work has also revealed the remarkable contents of these ancient medical manuscripts.

Experts say the works are based mainly on studies of determining disease by taking the patient’s pulse. Other practices mentioned include internal medicine, surgery, gynaecology, dermatology, ophthalmology as well as traumatology. In addition, 184 tiles are related to the medical treatment of horses, considered by the experts as one of the most important veterinarian works in ancient China.

The bamboo strips were found, along with many other precious relics, within four Western Han Dynasty (206 BC – 24 AD) tombs located in the town of Tianhui. Among the finds were four models of looms, nine medical books, 50 inscribed wooden tablets, 240 lacquer wares, jewellery, and tomb figures. Out of the nine medical books, some have been verified to be the long lost medical treatises written by the physician Bian Que. In addition, archaeologists also uncovered a 14-centimeter long figurine with major acupoints marked out. It is believed to be a key to deciphering the origin of acupuncture treatment.

According to Chinese legend recorded in the Records of the Grand Historian, Bian Que was gifted with remarkable abilities from a deity. The story states that he was given a packet of medicine which gave him the ability to see through the human body. He thereby became an excellent diagnostician with his x-ray like ability. It is said that he pioneered pulse-taking, used anaesthesia and even performed an organ transplant.

One legend stated that once, while visiting the state of Guo, Bian Que saw people mourning on the streets. Upon inquiring what their grievances were, he got the reply that the heir apparent of the lord had died, and the lord was in mourning. Sensing something afoot, he is said to have gone to the palace to inquire about the circumstances of the death. After hearing of how the prince “died”, he concluded that the prince had not really died, but was rather in a coma-like state. Using his acupuncture, he was said to have brought the prince back to consciousness. Prescribing the prince with medicine, the prince healed within days.

Whether there is factual basis to the legends or not, Bian Que is known to have been a remarkable physician who was centuries ahead of his time. The discovery of his ancient remedies is an incredibly rare and important find.