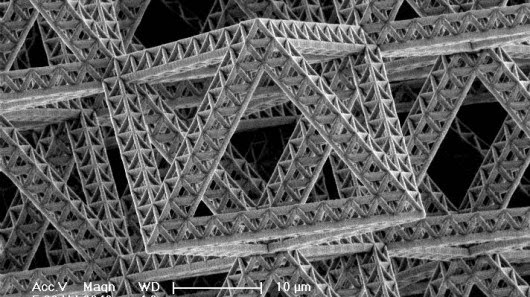 This is a pretty good review piece of just were our current research is. Material science is advancing steadily into nano engineered materials capable of miraculous properties and ultimately cost effective manufacturing.

What is described here is a natural one off process that will still have serious application. Rocket engines come to mind.


Yet we are well on the way to producing my multilayered skin for my Magnetic Field Exclusion Vessel.


Researchers at the California Institute of Technology are developing a disruptive manufacturing process that combines nanoscale effects and ad-hoc architectural design to build new supermaterials from the ground up. The materials can be designed to meet predetermined criteria such as weighing only a tiny fraction of their macroscopic counterpart, displaying extreme plasticity, or featuring outstanding mechanical strength.

A Tesla Model S has a curb weight of 2,108 kg (4,650 lb), the battery pack making up a significant portion of that figure, but in most cases the cargo it carries is only around one tenth of that number. From an efficiency standpoint, this is an unmitigated disaster: everything that isn't cargo is simply overhead, and having to carry that much of it around will shorten the car's range considerably.


According to Julia Greer, professor of materials science and mechanics at Caltech, the technology that would allow us to do that might soon be within our reach. But to get there, we need to take our approach on manufacturing materials and turn it completely on its head.


Normally, the manufacturing processes that are used on a material will dictate the mechanical properties of the final product. But according to the Caltech researchers, the better approach is to start from the properties you want the material to have and then go backwards, designing the nanoscale architecture that would allow the material to reach the desired specifications.


"I can start with a property and say that I want something that has this strength or this thermal conductivity, for example," says Greer. "Then I can design the optimal architecture with the optimal material at the relevant size and end up with the material I wanted."

Using a technique they originally developed last year, Greer and her team are able to first create a computer design of the structure they want to build, and then process it in such a way that it can be made out of any material class, whether they be metals, ceramics or semiconductors, with a precision on the order of a few nanometers.


The researchers first use a laser writing method called two-photon lithography, which uses the constructive interference of photons from two different lasers to sculpt a three-dimensional pattern onto a polymer. When the laser beam is focused, it hits the polymer and cross-links it, dissolving away the rest. The end product is a three-dimensional polymer scaffold.


In the second step, the researchers use an industry-standard deposition process to coat the scaffold with a thin and uniform layer of the desired material, obtaining a composite of the polymer and the coating material.


In the final step, the researchers etch out the polymer from within the structure, leaving a hollow architecture comprised entirely of the desired material.


As Greer tells us, the challenge with scaling up the nanotruss production is that the two-photon lithography process, which they use in the first step of creating the structures, is very time-consuming.


"The process is effectively a 3D printer, but allows for much more refined features that have dimensions three orders of magnitude smaller than those of conventional printers," Greer tells us. "It would have to be a completely different 3D scaffold generating process to produce large-scale nano-trusses in a feasible way."

If you were to plot the strength of every known material against its density, you would find a very clear trend: density and strength always go hand in hand. Strong materials like steels and other metals are very heavy, and materials that are light, like foam, are also quite weak.


However, tinkering with materials at the nanoscale can change their macroscopic properties in ways that are dramatic and often surprising.


"It turns out that almost every class of materials has size-dependent properties, even in the physical world," Greer told Gizmag. "Single-crystalline metals become stronger when reduced to the nano-scale, and some intrinsically brittle materials become ductile."


The over-arching reason for this, Greer tells us, is that these nanostructures have a very high surface area to volume ratio. This completely transforms the way in which the microscopic features of the material – for instance, a small defect or the carriers of plasticity – interact with each other and propagate throughout the material. An intelligently designed nanoarchitecture can further manipulate the way in which the features interact with each other.


As the researchers have shown, some metals can become about 50 times stronger in this way, decoupling strength from density and making materials that are strong, tough and extremely lightweight despite containing 99 percent air.

Greer and colleagues have taken this process one step further to build fractal nanostructures. Simply put, these are nanomaterials whose architecture displays a nested, self-similar pattern, which allows the researchers to incorporate hierarchical design into the material's architecture.


"When materials are arranged in hierarchical manner, they end up possessing many lucrative properties, beyond the so-called rule of mixtures," Greer tells us. "Hard biological materials like nacre shells and bird beaks, for example, draw much of their damage tolerance from the hierarchical arrangements of platelets and other hard constituents within their structure. Adding each level of hierarchy likely allows for even more degrees of freedom in tuning the specific properties because each level offers this amplification beyond the rule of mixtures."

The range of applications is practically limitless. Transportation certainly jumps to mind as an area where this technology could have a major impact, leading to much lighter vehicles with improved performance and which would drastically cut energy consumption without sacrificing safety.


There could also be disruptive changes in battery technology. Silicon has a much greater capacity for storing energy than the graphitic carbon used in today's lithium ion batteries, but it isn't currently practical for commercial use because it suffers from cracking, leading to catastrophic failure. Using nanotrusses, the silicon can be made to be both extremely lightweight and capable to expand by as much as 400 percent, preventing failure and paving the way for batteries that are both lighter and better-performing than today's.


In photovoltaics, Greer's group has demonstrated geometries for the antireflective coating of a solar cell that would be able to trap photons across the entire spectrum.

And finally, a lightweight but mechanically strong nanostructure could be very well-versed as a scaffold – from the nanoscale, where it could be used to support cell growth, to the macroscale, to construct tougher buildings at a fraction of the cost.
Posted by arclein at 12:00 AM