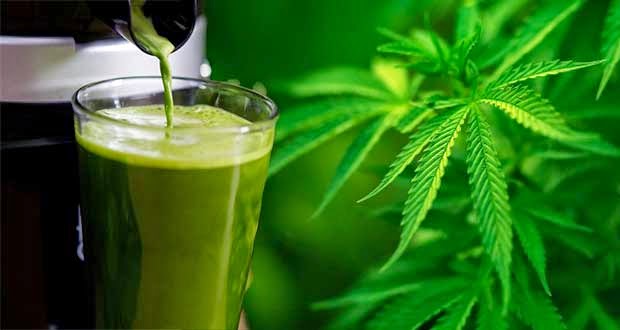 The raw truth is that it is impossible to get high on raw cannabis juice.  Thus using it is hardly a problem and the indications now flooding into the world is that we need to be using it for general healing almost as a convenient tonic.  In fact a glass of cannabis is clearly a preferred option to phony orange juice in particular.

This will all take some time yet, but the mass of data supporting the use of cannabis is quickly touring into a flash flood.  Add in the wonderful revelation that it also quells the craving produced by opiates in particular, this is well on the way to been the go to solution for healing drug abuse.

It is amazing just how much positive data is now coming out on all this.

Although the results may not be shocking to everyone, many people on the planet are just starting to wake up to the tremendous medicinal benefits that cannabis has to offer. A recent study conducted by the Institute of Molecular Psychiatry at the University of Bonn in Germany just discovered that the activation of the brain’s cannabinoid system triggers the release of antioxidants that act as a cleansing mechanism. This process is known to remove damaged cells and improve the efficiency of mitochondria. Mitochondria is the energy sources that powers cells. The study was published in the Philosophical Transactions of The Royal Society, B.

There is also a large amount of evidence supporting the fact that cannabis can also be an effective treatment, and even a potential cure for cancer. We provided a list of 20 medical studies that prove cannabis can cure cancer. We already know that prescription drugs kill over 100,000 people each year and that a plant-based diet can prevent over 60% of chronic disease deaths. It’s time to lose our stigmatism about cannabis, the only reason we’ve been made to look at it in a negative manner is because it would threaten multiple industries (including the pharmaceutical industry). Cannabis along with hemp has over 50,000 uses and could help transform our world.

Cannabinoids have been proven to reduce cancer cells as they have a great impact on the rebuilding of the immune system. While not every strain of cannabis has the same effect, more and more patients are seeing success in cancer reduction in a short period of time by using cannabis. Contrary to popular thought and belief, smoking the cannabis does not assist a great deal in treating disease within the body as therapeutic levels cannot be reached through smoking. Creating oil from the plant or eating the plant is the best way to go about getting the necessary ingredients which are the cannabinoids.

Another aspect of smoking the cannabis that must be looked at is the fact that when the cannabis is heated and burnt it changes the chemical structure and acidity of the THC which changes its ability to be therapeutic. Furthermore, anytime you burn something and inhale it, you create oxidation within the body. That oxidation is not healthy for the body and can lead to health issues itself. This is why anti-oxidents are an important part of any healthy diet.