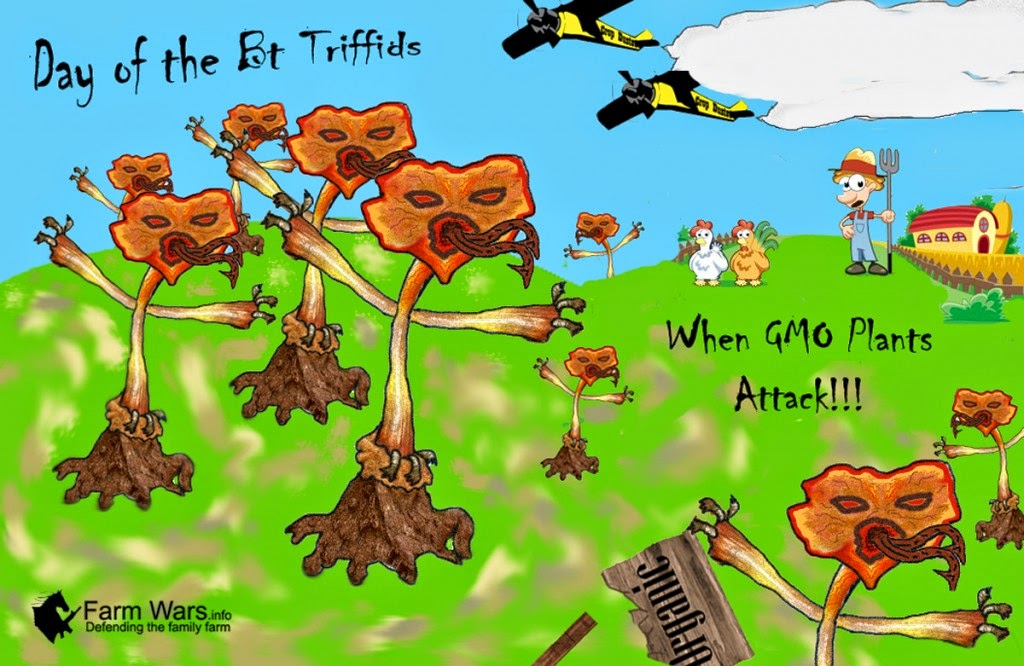 We have not heard the end of this of course.  To start with organic certification is an economic advantage that can be monetized and used to clearly establish damages.

Better this damage is ongoing even assuming the plaintiff exercises heroic efforts to undo the damage.  My point is that judges understand economic damage.  If I had a herd of cattle trample my neighbor’s field, that judge would have made me pay.

The task is to launch multiple suits for damages whenever such damage occurs.  The damage issue cannot be much clearer.  If of course, the price of GMO grain rises, the revers will be true.  After all Monsanto has already shown that they can sue and collect in such situations.

More important, all the precedents come under common law and are not that binding leaving plenty of discretion to the judges.  Thus Monsanto will be stuck with paying of every judge in the world to win every fight.  a lot of these claims can even be pursued in small claims court.

It’s a sad day in Organic Town when the government decides that organic farmers have no recourse against GMO contamination from the companies that sell genetically engineered (GMO) crops or the GMO farmers that cause organic crops to be contaminated. A sad day, indeed.

That is exactly what happened to Australian farmer, Steve Marsh when his organic crop was contaminated by his neighbor’s GMO crop.

Western Australian farmer Steve Marsh (#IamSteveMarsh) has lost a landmark case which could have protected his organic status, after his property was contaminated by GM canola from a neighbouring farm.

The verdict was handed down Wednesday and can be found here:

Marsh, an organic farmer from Kojonup, south of Perth, Western Australia (WA), lost organic certification for most of his farm when GM canola contaminated his crop. He took action by suing his neighbour Michael Baxter in the Supreme Court of WA, in a landmark world’s first trial which started earlier this year.

While organic farmers try and figure out how to survive in the face of what appears to be an unstoppable government-backed onslaught on their very right to exist, biotech firms along with their flunky farmers are doing the happy dance. Why? Because they are apparently immune from any type of liability if their GMO crops contaminate and ruin organic farms.

The ruling in Marsh v Baxter is an enormous win for the agricultural biotechnology industry, and has disappointed organic farmers and their advocates…

First, [Judge] Martin concluded “that there was no unreasonable interference by Mr Baxter with the Marshes’ enjoyment of Eagle Rest merely by his growing RR canola on Sevenoaks during 2010″.

Second, he held that Baxter’s swathing wasn’t “unreasonable interference with the use and enjoyment by the Marshes of Eagle Rest” – irrespective of their organic certification and the contracts that relied upon it.

Third, the Marshes’ action in negligence also failed, in part because of the novelty of the case led to “the absence of a duty of care to avoid a foreseeable economic loss”.

Finally, the judge rejected the claim for a permanent injunction to stop Baxter swathing in the future, because of “the absence of an empirical basis to support any buffer distance”…

While the critics of genetically modified crops were disappointed by the decision, the agricultural biotechnology industry was jubilant. Matthew Cossey, chief executive of CropLife Australia, said the decision was a “victory for common-sense and confirms the long standing tradition of coexistence of all farming methods”.

When you read “victory for common-sense and confirms the long standing tradition of coexistence of all farming methods,” this actually means – victory for the right of GMO farmers to contaminate whomever they like and wipe non-GMO farmers out of existence legally. Oh well, I guess it is the organic farmer’s fault for not wanting GMOs. Too bad, so sad, let’s just go to the pub and have another round of GMO beer and celebrate the victory for GMO agribusiness, shall we? I think not.

If anything, this case makes it just that much more apparent that the government is not our friend. It will not take care of us, it does not care if we die. Those in it will lie to cover their tracks, and justify those lies with falsified information taken from their corporate masters. It gives itself a free pass to maim, destroy, sicken and otherwise take advantage of the trust that people blindly place in its benevolence. It is not benevolent. It is malevolent. The only good it does is for show in order to gain a bigger foothold on controlling the people and all resources.
Actions speak much louder than words, and they are speaking louder every day. Just ask Steve Marsh.