My Journey Into The Sanskrit Texts 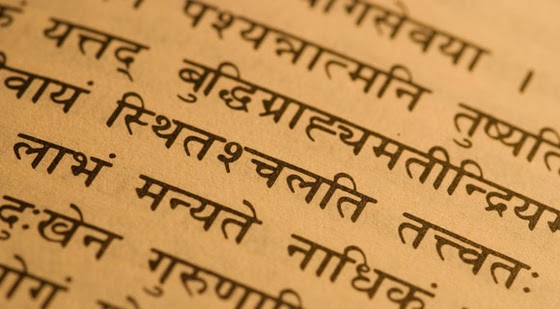 This is a rather useful item as it clearly informs us of just why Hinduism has remained impenetrable to western sensibilities.  We search for a system and discover a fractal quilt of revered scripture that is all pointing toward godhead.  It fails to submit to alphabetic order or any uncontroversial order.

The Bhagavad is what everyone in India actually relies on as the opening scriptures and all else must be interpretation and insertions from there.  At least we receive that much guidance.


In truth, everyone needs to read this vignette in order to properly start the inquiry.


My Journey Into The Sanskrit Texts

I have always been drawn to India, her beauty and wisdom, and especially the Bhagavad Gita. Over the years of my life I would try again and again the read the Bhagavad Gita, only to realize that I simply did not understand it. Since 2002, I began an ongoing serious study of various translations of not only the Bhagavad Gita, but of the wonderful Mahabharata(which contains the Bhagavad Gita), the Upanishads, texts on Samkhya, many of the Kashmir Shaivite Sanskrit texts, a few Samhitas, and lastly the Rig Veda (said to be the source of all the others).

Thanks primarily to Exotic India Arts online, I was able to get 100s of translations of the sacred texts and scholarly books, the majority of which were authored by Indians, which deepened and expanded my understanding. I have said smiling to friends that at long last I had understood the Bhagavad Gita, but to do so I had to read 500 other books!

The Sanskrit texts are a vast ocean reflecting the wisdom knowledge of 100s of enlightened masters over 1000s of years, when India was made up of diverse kingdoms. There is no such thing as Hinduism. The term Hinduism was created only in recent history by foreigners:
[  Oh My – Now I really appreciated the centuries of effort by Judaism and the Early Christians to produce a canon of work – arclein ]

“The Sanskrit name for the Indus River is ‘Sindhu’ and with the coming of Arabic speakers to India around 1000 CE the term ‘hindu’ first appeared. Arabic speakers pronounced ‘sindhu’ as ‘hindu’ and used the word to refer to those living on the other side of the Indus River. Consequently, the term was originally a geographical reference that included many peoples. As late as the 16th century the term even referred to Muslims living within India because they too lived beyond the Indus. By the end of the 18th century, however, the British were using the term to refer to the people of India who were not Christian, Muslim, Sikh or Jain. The ‘ism’ was added early in the 19th century. Later the word was appropriated by ‘Hindus’ themselves as part of their national and religious identity; and so today the term has evolved as the name for the religion of the Vedas. The more correct Sanskrit term for this religion is, sanatana-dharma, ‘the eternal way’, but since the term ‘hinduism’ has emerged, we will use this word.” [sanskrit.org]

“the spiritual laws that govern the human existence. Sanatana Dharma is to human life what natural laws are to the physical phenomena.  Just as the phenomena of gravitation existed before it was discovered, the spiritual laws of life are eternal laws which existed before they were discovered by the ancient Rishis (sages) for the present age during the Vedic period.” [sanatana-dharma.tripod.com]

What has come to be termed Hinduism is actually a process of Inquiry, with varying ‘approaches’ to the One that permeates All. Anyone who begins to study this vast body of knowledge is bound to feel a little overwhelmed. There are so many texts, for example there are 200 Upanishads, of which 13 are considered to be core teachings. Then there are the many various schools of thought that have interpreted the basic texts to reflect the lens of their particular school. Many more Sanskrit texts have yet to be translated and in India, Sanskrit scholars are endeavouring to do so.

What we in the west initially knew of the Sanskrit texts was wrongly presented primarily by scholars who were employed by the British Raj through the East India Tea Company for the explicit purpose of making Indians doubt their own faith. Most Indians could not and still cannot read Sanskrit, and thus remain dependent on their local priest for understanding them. Some of these paid western scholars later apologized for this egregious propaganda, but the damage was done and still lingers toxic in the air.

Most horribly misleading are the early translations of the Rig Veda, which make the sacred verses in the Rig Veda appear to be the work of a primitive people who worship cows and make sacrifices to idols. Even a cursory look at Indian culture will make it clear that ancient India was anything but primitive. When I read my first translation, I was appalled! I instinctively knew that the translation could not be right. The Rig Veda was the source of the most subtle and brilliant metaphysics on the planet – and the key to liberation from Samsara. So how could mere ‘cow’ worshipping lead to that?

Later I found that the Sanskrit word for cow GAU had over 27 meanings including: ray of light, sunlight, light, perception, the sense organs, knowledge, wisdom, the soul, consciousness, the Earth, the sky, a singer, a song, substance, and herds of stars. As I slowly began to teach myself Sanskrit, I came to understand that the words that make up the verses had multiple layers of meanings. The ability to perceive these meanings is dependent on the level of consciousness and wisdom of the one reading and translating.

The Sanskrit used in the Rig Veda is not the Sanskrit of the latter texts, and translations of the Rig Veda are wildly diverse. One cannot help but be astonished at the unrelated meanings that have been forced out of these sacred ancient verses. Indian scholars themselves admit this and have said that to date, there is no agreement on the meaning of the Rig Veda. What to think? The Rig Veda is the source of all the other sacred Sanskrit texts and yet either it cannot be translated in English (which is a very limited language of commerce), or they don’t know what it means.
[ they do not know what it means and requires direct critical revelation to decipher. Arclein ]

According to sage Sanskrit scholars, even in ancient times the Rishis and enlightened masters knew that as we descended down into the Kali Yuga, the real meaning of the Rig Veda was being lost. Thus these great ones composed the Upanishads and other Sanskrit texts to serve as bridges of knowledge into our current dark era. The Mahabharata was also a massive repository of all that had come before it and the Bhagavad Gita, which is a small part of the Mahabharata, is the essence, the jewel-like distillation of the wisdom knowledge in all the other previous Sanskrit texts, and so brilliantly conceived and written that it is India’s trusted refuge.

These texts were not intended to be ‘quick or easy’ reads. They are meant to generate a depth of concentration that will allow the sincere ones to open their hearts and approach the God-within. They are doors to enlightenment. For the message of the sacred Sanskrit texts is simple: There is only the One. Beneath the manifested multiplicity, perceived via the endlessly differentiating five senses, is Oneness. Everything is the One! The immeasurable imperishable immutable Oneness created all these universes to play in — and Veiled Itself as you and me, and every other living creature, in order to experience ITs infinite Self through the ‘appearance’ of limitation. We are That ONE!
[ When I read such struggles converted to words, I am thankful that I can address these ideas through the rigors of mathematics. Arclein ]

Our daunting arduous task is how to get from the consciousness of being Veiled in the Illusion of Separation, imagining that we are the small ego-self – to remembering that we are the One playing in Time & Space. It is not so easy to undo what God has done! It was not intended to be easy. The Sanskrit texts contain exquisitely subtle metaphysics and whisper their liberating MOKSHA secrets to us through the voices of the ancient Rishis, who had indeed Become the One.

About the Author
V. Susan Ferguson is the author of Inanna Returns, Inanna Hyper-Luminal; her own commentary on the Bhagavad Gita and the Shiva Sutras; and Colony Earth & the Rig Veda. Her website is Metaphysical Musing.
This article is offered under Creative Commons license. It’s okay to republish it anywhere as long as attribution bio is included and all links remain intact.