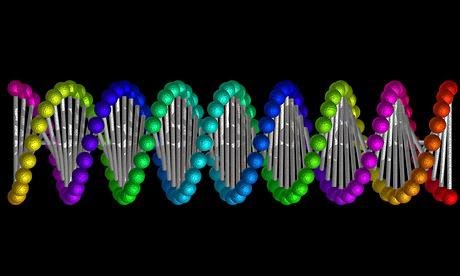 This really throws down the glove and real bioengineering will follow.  Also keep in mind that we now possess the Rosetta stone of DNA work is at least two alien skulls and their genomes.  What we need now are ten times as many researchers.

Multiple strands of humanity will soon be engineered particularly for Space work and plausibly for deep sea work as well.  Both are obvious.  Known alien examples all scream this level of genetic design.  Even the Starchild was clearly engineered to max out the brain and its special protection.  This was done at the expense of been Earth friendly.

All these questions will be tackled head on in the next generation.

The latest study moves life beyond the DNA code of G, T, C and A – the molecules or bases that pair up in the DNA helix. Photograph: Scott Camazine /Alamy

The first living organism to carry and pass down to future generations an expanded genetic code has been created by American scientists, paving the way for a host of new life forms whose cells carry synthetic DNA that looks nothing like the normal genetic code of natural organisms.

Researchers say the work challenges the dogma that the molecules of life making up DNA are "special". Organisms that carry the beefed-up DNA code could be designed to churn out new forms of drugs that otherwise could not be made, they have claimed.

"This has very important implications for our understanding of life," said Floyd Romesberg, whose team created the organism at the Scripps Research Institute in La Jolla, California. "For so long people have thought that DNA was the way it was because it had to be, that it was somehow the perfect molecule."

From the moment life gained a foothold on Earth the diversity of organisms has been written in a DNA code of four letters. The latest study moves life beyond G, T, C and A – the molecules or bases that pair up in the DNA helix – and introduces two new letters of life: X and Y.

Romesberg started out with E coli, a bug normally found in soil and carried by people. Into this he inserted a loop of genetic material that carried normal DNA and two synthetic DNA bases. Though known as X and Y for simplicity, the artificial DNA bases have much longer chemical names, which themselves abbreviate to d5SICS and dNaM.

In living organisms, G, T, C and A come together to form two base pairs, G-C and T-A. The extra synthetic DNA forms a third base pair, X-Y, according to the study in Nature. These base pairs are used to make genes, which cells use as templates for making proteins.
Romesberg found that when the modified bacteria divided they passed on the natural DNA as expected. But they also replicated the synthetic code and passed that on to the next generation. That generation of bugs did the same.

"What we have now, for the first time, is an organism that stably harbours a third base pair, and it is utterly different to the natural ones," Romesberg said. For now the synthetic DNA does not do anything in the cell. It just sits there. But Romesberg now wants to tweak the organism so that it can put the artificial DNA to good use.

"This is just a beautiful piece of work," said Martin Fussenegger, a synthetic biologist at ETH Zurich. "DNA replication is really the cream of the crop of evolution which operates the same way in all living systems. Seeing that this machinery works with synthetic base pairs is just fascinating."

The possibilities for such organisms are still up for grabs. The synthetic DNA code could be used to build biological circuits in cells which do not interfere with the natural biological function; scientists could make cells which use the DNA to manufacture proteins not known to exist in nature. The development could lead to a vast range of protein-based drugs.

The field of synthetic biology has been controversial in the past. Some observers have raised concerns that scientists could create artificial organisms which could then escape from laboratories and spark an environmental or health disaster.

More than 10 years ago, the scientist Eckard Wimmer, at Stony Brook University, in New York, recreated the polio virus from scratch to highlight the dangers.

Romesberg said that organisms carrying his "unnatural" DNA code had a built-in safety mechanism. The modified bugs could only survive if they were fed the chemicals they needed to replicate the synthetic DNA. Experiments in the lab showed that without these chemicals, the bugs steadily lost the synthetic DNA as they could no longer make it.

"There are a lot of people concerned about synthetic biology because it deals with life, and those concerns are completely justified," Romesberg said. "Society needs to understand what it is and make rational decisions about what it wants."

Ross Thyer, at the University of Texas, in Austin, suggested the synthetic DNA could become an essential part of an organism's own DNA. "Human engineering would result in an organism which permanently contains an expanded genetic alphabet, something that, to our knowledge, no naturally occurring life form has accomplished.

"What would such an organism do with an expanded genetic alphabet? We don't know. Could it lead to more sophisticated storage of biological information? More complicated or subtle regulatory networks? These are all questions we can look forward to exploring."