J.R.R. Tolkien Reveals TRUE Meaning Of 'The Lord Of The Rings' In Unearthed Audio Recording From 1958 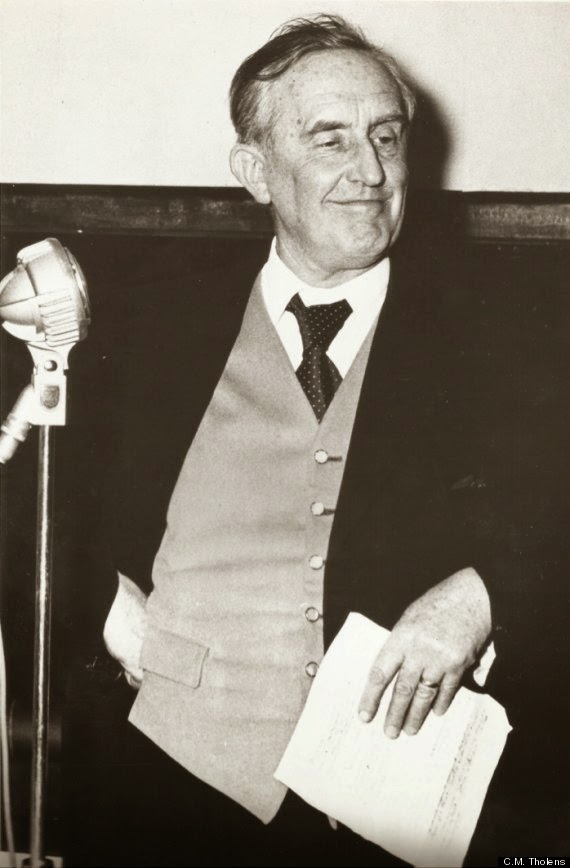 This is something that we can all look forward to with enthusiasm.   My own encounter began as part of my reading assignment for my major essay in First Year honors English back in the fall of 1967.  Prior to that I had heard a part of the hobbit read on CBC radio and I was completely captured although I had not heard the name of the book or the author.  Not that it mattered as acquiring such a book was then beyond my means.

Even here we discover that the core purpose of that silly ring was to drive the narrative.  Even now we learn from the true master of writing and English Letters.  I was convinced immediately that this was an important work, a position hardly held by English departments anywhere.

This work stimulated an entire subgenre and set the rules for it as well.  That this subgenre has largely grown to dominate English Letters in terms of reader popularity is the ultimate answer and that this book could be voted as the most important book of the twentieth century declares Tolkien’s genius.

I expect this early verdict to hold up.

Over 20 years ago, a lost recording of J.R.R. Tolkien was discovered in a basement in Rotterdam, but the man who found it kept this important reel-to-reel tape hidden away. Until recently, only he had heard the recording. But now, I am one of those lucky Middle-earth lovers who has listened to this magical magnetic tape, and I happily declare that it is awesome. For it proves once and for all that Professor Tolkien was, in fact, very much the hobbit that we all suspected him to be. What's more, we get to hear Tolkien reading a lost poem in the Elven tongue which he translates into English. And to top it off, he states in unambiguous terms (cue Rohirrim war trumpets) the real meaning of The Lord of the Rings!

Got chills yet Tolkien fans? Just wait until you hear it yourself.

The recording took place on March 28th, 1958 in Rotterdam at a "Hobbit Dinner" put on by Tolkien's Dutch publisher and a bookseller. Tolkien's own publisher, Allen and Unwin, paid for his trip to the Netherlands to attend this special party. According to his letters the author was chuffed to find that Rotterdam was filled with people "intoxicated with hobbits." Tolkien showed up at a packed hall where 200 hobbit fanatics had come to hear him and other scholars talk about Middle-earth. The menu for the dinner was whimsically Tolkienesque, with Egg-salad à la Barliman Butterbur, Vegetables of Goldberry, and Maggot-soup (mushroom soup regrettably named after Farmer Maggot). And a Dutch tobacco company supplied the tables with clay pipes and tobacco labeled Old Toby and Longbottom Leaf, which pleased Tolkien, a devotee of the "art" of smoking pipe-weed.

Accounts of the event have been cobbled together over the years but, sadly, nobody bothered to transcribe exactly what Tolkien said. Christopher Tolkien must have had some of his father's notes for his speech, because a brief passage from Tolkien's Hobbit Dinner oration appears in Humphrey Carpenter's biography, albeit in a slightly different form. Thankfully we now know that someone had made a complete recording of the event. This reel-to-reel tape was discovered in 1993 by a Dutchman named René van Rossenberg, a Tolkien expert who owns a shop in the Netherlands devoted to all things Middle-earth (TolkienShop.com). Why didn't van Rossenberg show it to anybody until now?

"Like Smaug I am guarding my treasure, hissing at any collector who comes near," he recently stated in response to my email query. Fortunately, a Middle-earth maven named Jay Johnstone, one of the founders of the fantasy/sci-fi site Legendarium.me, sleuthed that van Rossenberg had the recording in his possession, and persuaded him to open his dragon hoard. "I am looking forward to sharing with all Tolkien aficionados the great joy I felt when I first played the tape and heard Tolkien give his great speech," added van Rossenberg.

Legendarium and the Tolkien site MiddleEarthNetwork.com have partnered with van Rossenberg to raise both awareness and funds in order to remaster the original reel-to-reel tape, chronicle the event, and make it available to the world this fall via the Rotterdam Project. "Anything new from Tolkien is always exciting," said Tom Shippey, author of J.R.R. Tolkien: Author of the Century, "but the Rotterdam Project is especially so. A speech from Tolkien, in the first years of his success with Lord of the Rings, when he was among friends, enjoying himself, and able to speak freely!"

The above photograph, taken on the night of the Rotterdam Hobbit Dinner, shows Tolkien in his fancy waistcoat (or weskit as they would have called it in the Shire). No doubt Tolkien had already imbibed a pint or two at his table by the time he made his way to the microphone to stand in front of the adoring crowd of Netherlanders. I've studied many photos of Tolkien over the years, but this is absolutely one of my favorites. Look at the jaunty way he puts his right hand on his hip. The cheerful yet wry smile of a skilled speaker who knows how to work a crowd. This is the kind of man you'd want to go inn-crawling with through the Shire (or even Rotterdam).

At the start of the speech Tolkien is indeed full of high-spirits and cracks jokes in a way that we've never heard him do before. Rather than the ultra-serious Oxford don whom most of us know from his scanty recordings, we get Tolkien-as-Bilbo, right out of the chapter "A Long-expected Party." He even makes reference to that famous eleventy-first birthday, for Tolkien's oration was intended as a parody of Bilbo's farewell speech. The author's merry voice, with its brusque and rich accent, dances around your head like a hobbit drinking song. For the Professor, it was said by one of his former students, "Could turn a lecture room into a mead hall."

Tolkien thanked the assembled "hobbits" for giving him the greatest party of his life. He spoke very modestly about The Lord of the Rings calling it "A poor thing, but my own." He couldn't believe that the people there would want to hear an after-dinner autobiography. So he jumped right into explaining the construction of his great narrative work, stating that the One Ring is a mere mechanism that "sets the clock ticking fast." And then he quite plainly spells out what the books are about--something he only alluded to once in a letter, but is incontrovertible in this speech. (If you want to know exactly what he says you'll just have to listen for yourself!)

At one point he read a poem in Elvish, joking that hobbits were always terrified when someone threatened to recite poetry at a party. He prefaced the poem by saying it was almost twenty years to the day since he had started working on The Lord of the Rings. His mellifluous voice makes the imaginary language come alive, like sinuous silvery mithril script etched in the mind's eye:

Tolkien had spent the afternoon walking around Rotterdam--a city that had suffered much destruction during World War II. The sight of it had saddened him, reminding him of the "orc-ery" that he so lamented taking hold of the world. The "cold-hearted wizards," in their quest for knowledge and power, were only good at destroying things. In his final salute to the assembly of hobbit-lovers, Tolkien said that Sauron is gone, but the descendants of the hateful, Shire-polluting wizard Saruman are everywhere. The hobbits of the world have no magic weapons to fight them. But, he adds with a robust and hopeful declaration:

"And yet here gentlehobbits may I conclude by giving you this toast. To the hobbits! And may they outlast all the wizards!"

The Rotterdam Hobbit Dinner was the first of its kind, and also the last. For Tolkien never again attended another party like this in his honor. But now we have the proof of what took place on that wonderful night, and what the great author said. And the sound of Tolkien's voice, like his works, will outlast death.

Here is a preview of the Rotterdam Project. As Jay Johnstone says, "It's a rare insight into Tolkien the man, rather than the author."