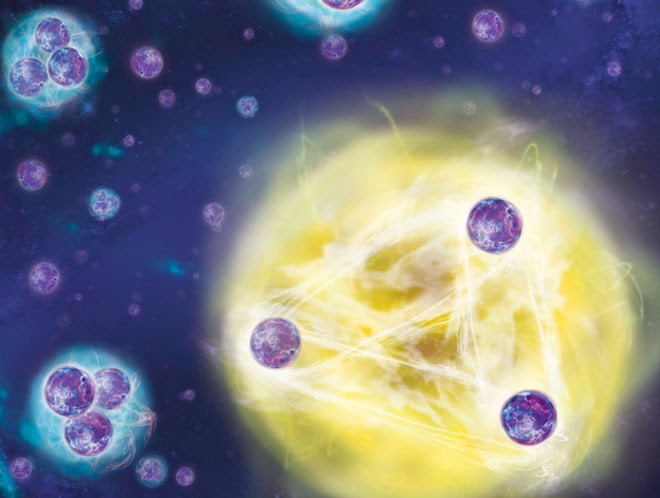 This item is interesting and clearly leads us to a great deal more physics using the ultra cold system. The theory also confirms that there is a lot of geometry at work here and my own ideas regarding the construction of atoms fits into this world. Better it provides an excellent confirmation tool for theoretical constructs that I contemplate ultimately producing through simulation.

What is neat is to see a long ago theoretical result actually prove up in the lab. The math said so, but what theorist or empiricist ever really trust that? We are all too conscious that it is all made up although I sometimes wonder.


All good and perhaps someone gets a Nobel Prize out of this.

More than 40 years after a Soviet nuclear physicist proposed an outlandish theory that trios of particles can arrange themselves in an infinite nesting-doll configuration, experimentalists have reported strong evidence that this bizarre state of matter is real.

In 1970, Vitaly Efimov was manipulating the equations of quantum mechanics in an attempt to calculate the behavior of sets of three particles, such as the protons and neutrons that populate atomic nuclei, when he discovered a law that pertained not only to nuclear ingredients but also, under the right conditions, to any trio of particles in nature.

While most forces act between pairs, such as the north and south poles of a magnet or a planet and its sun, Efimov identified an effect that requires three components to spring into action. Together, the components form a state of matter similar to Borromean rings, an ancient symbol of three interconnected circles in which no two are directly linked. The so-called Efimov “trimer” could consist of a trio of protons, a triatomic molecule or any other set of three particles, as long as their properties were tuned to the right values. And in a surprising flourish, this hypothetical state of matter exhibited an unheard-of feature: the ability to range in size from practically infinitesimal to infinite.

“It’s a pretty wild idea,” said Randy Hulet, a physics professor at Rice University in Houston. “You get this infinite series of molecules.”

Efimov had shown that when three particles come together, a special confluence of their forces creates the Borromean rings effect: Though one is not enough, the effects of two particles can conspire to bind a third. The nesting-doll feature — called discrete scale invariance — arose from a symmetry in the equation describing the forces between three particles. If the particles satisfied the equation when spaced a certain distance apart, then the same particles spaced 22.7 times farther apart were also a solution. This number, called a “scaling factor,” emerged from the mathematics as inexplicably as pi, the ratio between a circle’s circumference and diameter.

“It’s like layers of an onion,” Hulet said. “You see molecules at one layer. Peel the layer away, and you see that there’s a molecule there 22.7 times smaller. Every time you peel away a layer, you find another molecule.”

Efimov published his theory in a Soviet journal as well as the Western publication Physics Letters B. At first, almost no one believed it.

“In the West, these ideas were greeted with great skepticism,” said Eric Braaten, a theoretical physicist at Ohio State University who was in high school when Efimov’s paper appeared.

Theorists waded into the equations in search of an error. But instead, Braaten said, “they became convinced that it was true.”

But even with airtight logic, the theory did not necessarily have to manifest itself in nature. “I thought it was way too weird to have any basis in reality,” said Chris Greene, a physicist at Purdue University who studies “few-body” quantum systems, which consist of only a few particles.

And for decades, no one knew whether the theory described real matter. As researchers mulled over where to look for Efimov trimers, Efimov himself emigrated west and became a teaching professor at the University of Washington, where he achieved renown more for shooting a gun in class during a lesson on inelastic collisions than for his outlandish theory.

Because the Efimov state is weakly bound and is usually overpowered by other forces, observing it requires precise tuning. Particles must have the peculiar quantum property of being able to collide when they are far apart, beyond the range of the force between them–a situation analogous to Earth ricocheting off a distant star whose gravity it does not feel. And the particles must have too little energy to wiggle out of formation.

Vitaly Efimov, a professor at the University of Washington — pictured during a visit to Innsbruck, Austria, in 2009 — developed his theory of trimers while working as a nuclear physicist in the Soviet Union in 1970. Image: Flatz/University of Innsbruck

Some physicists suspected that an accidental fine-tuning in nature might cause the Efimov state to arise in the guise of the helium-4 atom and in a carbon isotope called the Hoyle state that forms in stars and begets many other elements. But these nuclei were too complex for controlled studies.

In 1999, Greene realized that the properties necessary for the Efimov state could be tuned by hand in newly developed ultracold optical traps. Atoms inside these apparatuses could be laser-cooled to a fraction of a degree above absolute zero, limiting their wiggling ability, and a magnetic field could be applied to make them collide at great distances.

Rudi Grimm and his group at the University of Innsbruck in Austria managed to create an Efimov trimer for the first time in 2006, building it from a trio of cesium atoms cooled to 10-billionths of a degree above absolute zero. It was a long-awaited triumph for Efimov, who, Grimm recalled, became very emotional when he heard the news.

But the result did not decisively prove the theory.

“With just one example, it’s very difficult to tell if it’s a Russian nesting doll,” said Cheng Chin, a professor of physics at the University of Chicago who was part of Grimm’s group in 2006. The ultimate proof would be an observation of consecutive Efimov trimers, each enlarged by a factor of 22.7. “That initiated a new race” to prove the theory, Chin said.

Eight years later, the competition to observe a series of Efimov states has ended in a photo finish. “What you see is three groups, in three different countries, reporting these multiple Efimov states all within about one month,” said Chin, who led one of the groups. “It’s totally amazing.”

Grimm’s team observed a second Efimov trimer made of cesium atoms, reporting the results May 12 in Physical Review Letters. The 2006 trimer spanned the width of 1,000 hydrogen atoms, requiring the new one to measure a full micrometer across — “a gigantic molecule,” Grimm said.

Each 22.7-times larger Efimov state is also 22.7-squared times weaker, requiring the optical trap to be cooled even further to allow the new state to form. Grimm’s group perfected its techniques and detected the state at the very edge of experimental limits.

Meanwhile, the two other groups managed to observe three consecutive Efimov states by taking advantage of a footnote in the theory: When a trimer is built from a mixture of different particles rather than an identical set, the scaling factor of 22.7 decreases according to the particles’ relative masses. In other words, nesting dolls made of atomic mixtures become closer in size, enabling more of them to be observed within the experimental window.

Both Chin’s team and a group led by Matthias Weidemüller at the University of Heidelberg observed Efimov trimers of three different sizes, each made of two cesium atoms and a much lighter lithium atom. Chin’s group posted its paper online in February, and the Heidelberg scientists followed with theirs in March. Both papers, which are still under peer review, reported a scaling factor right around 4.9 for the relative sizes of their trimers — exactly the adjustment to 22.7 predicted by the theory.

“We are very excited about this result,” Chin said. “In the complicated molecular world, there’s a new law.”

The law is a geometric progression of evermore-enormous trios of particles, spanning in a theoretically infinite sequence from the quantum scale to (if the particles were cold enough) the size of the universe and beyond. “Although we didn’t see an infinite number of them, there’s pretty strong evidence when you see three in a row,” Chin said.

For some, the results mark the end of an era, as well as a starting point.

“For the classic Efimov scenario, the story is now basically completed,” Grimm said. But as a paradigm for looking at few-body phenomena in cold atoms, he said, “it’s like the tip of the iceberg.”

The Efimov state is the most elementary effect in few-body physics, the researchers said, but there are countless others that seem to influence the arrangements of small numbers of atoms: four-, five- and six-body interactions and so on. Scientists think it might be possible to augment some of these effects in ultracold optical traps to produce new bulk properties of matter, such as exotic forms of superconductivity. An improved understanding of few-body physics would also feed into models of more complex systems involving many more particles.

But direct practical applications of the Efimov state are limited. For the researchers who have studied the odd yet elegant idea for decades, the main driver of the new research, and its chief delight, is having a final proof.

“It is satisfying to really see this magic number, 22.7, coming out,” said Braaten, who was not involved in the new studies. “There was indirect evidence that all this worked, but actually seeing this discrete scaling factor explicitly in experiment — it’s comforting.”

A hundred years ago Nicola Tesla said the secret of the universe was in the three, six, and nine.