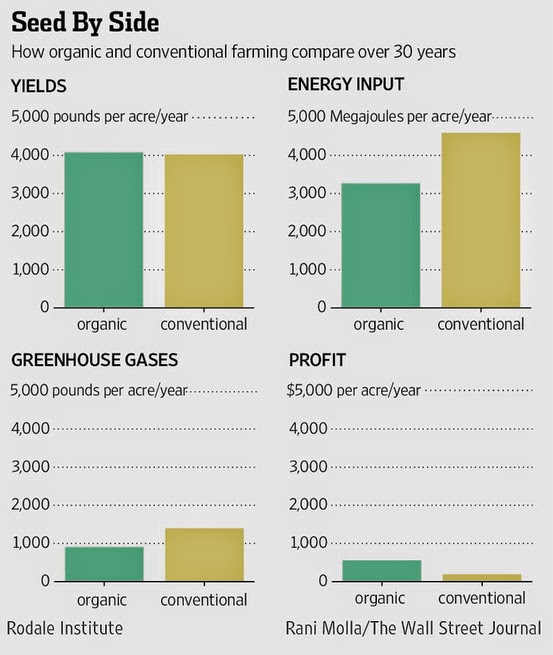 Ah yes, the practical problem is that we need farmers.  The irony of it.  As is blindingly obvious,   Organic protocols are now head to head with industrial farming in terms of simple productivity and that this trend can only get better simply because the organic protocol strengthens soils.  Add in the biochar protocol as well and this will turn into a rout.

Even more damaging, the present direct energy cost is a solid three quarters of that of conventional industrial farming.  Thus a switch to organic protocols allows you to match production and save heavily on the energy budget.  When the banks wake up to this they will insist on switching to organic for one excellent reason.  Energy costs are the one wild card in farm budgets that is unpredictable.

The good news is actually overwhelming.  Organic is simply much more profitable.  Thus actual conversion is likely already on everyone’s drawing board, including the largest in agribusiness.  Thus the added incentive of the organic premium will not likely last too long but that is good for consumers because even staples will become more and more biologically friendly.

The emissions aspect appears far better than expected as well.

The white paper by the Rodale Institute, a nonprofit that advocates for the use of organic practices, says that using “regenerative organic agriculture,” such as low or no-tillage, cover crops and crop rotation, will keep photosynthesized carbon dioxide in the soil instead of returning it to the atmosphere.

Citing 75 studies from peer-reviewed journals, including its own 33-year Farm Systems Trial, Rodale Institute concluded that if all cropland were converted to the regenerative model it would sequester 40% of annual CO2 emissions; changing global pastures to that model would add another 71%, effectively overcompensating for the world’s yearly carbon dioxide emissions.

Michel Cavigelli, a research soil scientist at the USDA’s Agricultural Research Service, which has a slightly different 19-year side-by side study, says his research also shows that organic soil has higher carbon content than conventional but warns that the devil is in the details. For example, the USDA study tills the organic plot and that might cause the manure’s carbon to stay deeper in the soil.
But the question organic farming always comes back to is whether farming without synthetic  pesticides and genetically modified organisms is really a viable way to feed the planet. Rodale Institute believes it can do that and better.

In the longest-running study of its kind, Rodale’s Farming Systems Trial compares organic farming with conventional farming, by farming neighboring plots just as organic farmers and traditional farmers would — that means its organic farming plot utilizes techniques like crop rotation and cover crops while the conventional plot uses common synthetic pesticides and genetically modified organisms. Both organic and conventional fields were divided into tilled and no-till areas to reflect that farmers use both practices.

“When you start to grow using organic methods and products, the soil is still depleted,” Executive Director Coach Mark Smallwood said. “That’s why the yield initially isn’t as high.” He says that organic farming betters the soil over time, while conventional farming depletes it. “If the soil is weak, so too will be the plants,” he said.

“There’s a whole bunch of ways to do organic and conventional farming,” Mr. Cavigelli said. “You can find different results based on details of how the management is done.”

According to Steve Savage, a Stanford- trained biologist and organic critic who consults for the agriculture industry, “There’s nothing wrong in principal [with the organic production findings] but in general there are the practical aspects of this being scaled up.” He sites issues such as attaining enough cow manure and that many farmers rent their land, which disincentives efforts to build up the soil.
Posted by arclein at 12:00 AM