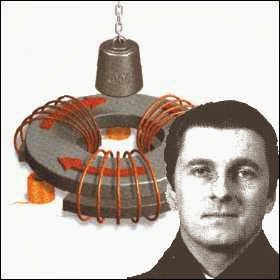 At least we have someone tackling the problem of gravity here and generating effects.  I am loath to call any of it gravity but then we do expect attraction forces and repulsion forces that are not obviously electrical in nature.  I do expect to see that directly linked to the same underlying forces.

We are generating results in spite of theory or lack thereof and that is good enough for now.

My current conjecture is that gravity or whatever its equivalent can be managed through geometry in particular and much more grossly than any of us imagined.

American Antigravity interviewed Eugene Podkletnov to discuss recent (2004 to 2013) experimental antigravity research in gravity modification and superconductors. For nearly two decades Dr. Podkletnov has been researching the link between gravitation and high-temperature superconductors, and just recently published the peer-review results of new experiments he’s conducted to measure the speed of a force-beam projected by a stationary superconducting apparatus he’s developed.


Podkletnov is well-known for his experiments involving YBCO superconductors, which produced a gravity-shielding effect that was investigated by NASA and has been the subject of many peer-review papers. He describes continuing his experiments in this area, and indicates that he has made continuing progress in creating an antigravity effect that partially shields the mass of objects placed above the rotating disks.


Dr. Podkletnov also describes his “force beam generator” experiment in detail, and provides insights into improvements that he’s made over the last decade to increase the force produced by this experimental gravity-beam. The force beam is generated by passing a high-voltage discharge from a Marx-generator through a YBCO emitter suspended in a magnetic field, and Podkletnov has described it as being powerful enough to knock over objects in the lab, as well as capable of being tuned by even punch holes in solid materials.


Podkletnov recently published a peer-review paper on the force beam experiment entitled “Study of Light Interaction with Gravity Impulses and Measurements of the Speed of Gravity Impulses” along with co-author Dr. Giovanni Modanese, and describes the findings of his study, which involved measuring the speed of the force-beam using two separate, but cross-correlated measurement techniques. After careful testing, Podkletnov has found the speed of the antigravity impulse to be approximately 64 times the speed of light (64c), which he indicates does not conflict with modern interpretations of Relativity Theory.


Podkletnov describes an antigravity effect generated by rotating magnetic fields that requires no superconductors to be generated, and suggests that it may provide an economical tool for future space & energy research.


Podkletnov maintains that a laboratory installation in Russia has already demonstrated the 4in (10cm) wide beam’s ability to repel objects a kilometre away and that it exhibits negligible power loss at distances of up to 200km. Such a device, observers say, could be adapted for use as an anti-satellite weapon or a ballistic missile shield. Podkletnov declared that any object placed above his rapidly spinning superconducting apparatus lost up to 2% of its weight.


There have been claims over the years (2002, 2014) that Boeing and others are researching the Podkletnov work.


BBC News reported in 2002 of the possible investigation by Boeing of Podkletnov's work.


An attempt has been made in this work to study the scattering of laser light by the gravity-like impulse produced in an impulse gravity generator (IGG) and also an experiment has been conducted in order to determine the propagation speed of the gravity impulse. The light attenuation was found to last between 34 and 48 ns and to increase with voltage, up to a maximum of 7% at 2000 kV. The propagation time of the pulse over a distance of 1211 m was measured recording the response of two identical piezoelectric sensors connected to two synchronized rubidium atomic clocks. The delay was 631 ns, corresponding to a propagation speed of 64c. The theoretical analysis of these results is not simple and requires a quantum picture. Different targets (ballistic pendulums, photons, piezoelectric sensors) appear to be affected by the IGG beam in different ways, possibly reacting to components of the beam which propagate with different velocities. Accordingly, the superluminal correlation between the two sensors does not necessarily imply superluminal information transmission. Using the microscopic model for the emission given in Chapter 5, we also have estimated the cross-sectional density of virtual gravitons in the beam and we have shown that their propagation velocity can not be fixed by the emission process. The predicted rate of graviton-photon scattering is consistent with the observed laser attenuation.