Rapid Expansion of Aquaculture is Continuing 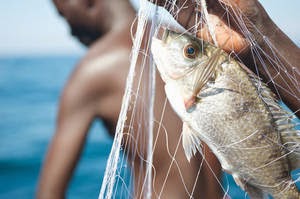 The expansion of global aquaculture is on a tear and will surely make fish products readily available to everyone over the next generation.  The wild fishery has to also organize itself far better.

In fact the best you can say about every part of the fish industry is that it all needs to do better.  The good news is that it is doing so. In fact I have little doubt two centuries from now that the global fishery will be many times bigger and that wild stocks will be the greatest ever known.  Our problem and the ongoing problem is simply the steps to get there.

The difficulty today is that we are pioneering a period of rapid change to allow access for all to seafood.  I am sure that we will all soon get to eat nile perch.

Report highlights growing role of fish in feeding the world

Fish now accounts for almost 17 percent of the global population’s intake of protein.
19 May 2014, Rome – More people than ever before rely on fisheries and aquaculture for food and as a source of income, but harmful practices and poor management threaten the sector’s sustainability, says a new FAO report published today.


The rapid expansion of aquaculture, including the activities of small-scale farmers, is driving this growth in production.


Fish farming holds tremendous promise in responding to surging demand for food which is taking place due to global population growth, the report says.


At the same time, the planet's oceans – if sustainably managed – have an important role to play in providing jobs and feeding the world, according to FAO's report.


“The health of our planet as well as our own health and future food security all hinge on how we treat the blue world,” FAO Director-General José Graziano da Silva said. “We need to ensure that environmental well-being is compatible with human well-being in order to make long-term sustainable prosperity a reality for all. For this reason, FAO is committed to promoting 'Blue Growth,' which is based on the sustainable and responsible management of our aquatic resources.”


The renewed focus on the so-called “blue world” comes as the share of fisheries production used by humans for food has increased from about 70 percent in the 1980s to a record high of more than 85 percent (136 million tonnes) in 2012.


The new report also says fish now accounts for almost 17 percent of the global population’s intake of protein -- in some coastal and island countries it can top 70 percent.

FAO estimates that fisheries and aquaculture support the livelihoods of 10–12 percent of the world’s population.


Since 1990 employment in the sector has grown at a faster rate than the world’s population and in 2012 provided jobs for some 60 million people engaged in capture fisheries and aquaculture. Of these, 84 percent were employed in Asia, followed by Africa with about 10 percent.


Global marine capture fishery production was stable at about 80 million tonnes in 2012, the new report indicates.


Currently, under 30 percent of the wild fish stocks regularly monitored by FAO are overfished – a reversal in trend observed during the past few years, a positive sign in the right direction.


Just over 70 percent are being fished within biologically sustainable levels. Of these, fully fished stocks – meaning those at or very close to their maximum sustainable production – account for over 60 percent and underfished stocks about 10 percent.


Global aquaculture production marked a record high of more than 90 million tonnes in 2012, including almost 24 million tonnes of aquatic plants. China accounted for over 60 percent of the total share.


Aquaculture’s expansion helps improve the diets of many people, especially in poor rural areas where the presence of essential nutrients in food is often scarce.


However, the report warns that to continue to grow sustainably, aquaculture needs to become less dependent on wild fish for feeds and introduce greater diversity in farmed culture species and practices.


For example, small-sized species can be an excellent source of essential minerals when consumed whole. However, consumer preferences and other factors have seen a switch towards larger farmed species whose bones and heads are often discarded.


The role of fish is set to feature prominently at the Second International Conference on Nutrition jointly organized by FAO and the World Health Organization (WHO) for 19–21 November 2014 in Rome.


Fish remains among the most traded food commodities worldwide, worth almost $130 billion in 2012 – a figure which likely will continue to increase.


An important trend sees developing countries boosting their share in the fishery trade – 54 percent of total fishery exports by value in 2012 and more than 60 percent by quantity (live weight).


This means fisheries and fish farming are playing an increasingly critical role for many local economies. Some 90 percent of fishers are small scale and it is estimated that, overall, 15 percent are women.  In secondary activities such as processing, this figure can be as high as 90 percent.


FAO, through the 2014 International Year of Family Farming, is raising the profile of smallholder activities – including fisheries and aquaculture – with an emphasis on improving access to finance and markets, securing tenure rights and protecting the environment.


An estimated 1.3 billion tonnes of food are lost per year -- to about one-third of all food produced. This figure includes post-harvest fish losses, which tend to be greater in small-scale fisheries.


In small-scale fisheries, quality losses are often far more significant than physical losses. Improved handling, processing and value-addition methods could address the technical aspects of this issue, but it is also vital to extend good practices, build partnerships, raise awareness, and develop capacity and relevant policies and strategies.


Food chain traceability is increasingly a requirement in major fish markets, especially in the wake of recent scandals involving the mislabelling of food products. FAO provides technical guidelines on certification and ecolabelling which can help producers demonstrate that fish has been caught legally from a sustainably managed fishery or produced in properly run aquaculture facility.


In particular, the report stresses the importance of the Code of Conduct for Responsible Fisheries which, since its adoption almost two decades ago, remains key to achieving sustainable fisheries and aquaculture. The Code promotes the responsible use of aquatic resources and habitat conservation to help boost the sector’s contribution to food security, poverty alleviation and human well-being.


FAO is also promoting “Blue Growth” as a framework for ensuring sustainable and socioeconomically-sensitive management of oceans and wetlands.


At the Global Oceans Action Summit on Food Security and Blue Growth held last month in The Hague, Netherlands, governments and other participants committed to actions focused on tackling climate change, overfishing, habitat loss and pollution in a bid to restore productive, resilient oceans.
Posted by arclein at 12:00 AM