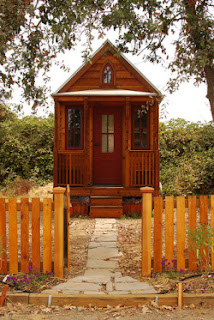 Per foot price pressure is forcing innovation on housing everywhere. This item shows us a little of the evolution taking place and much more needs to be done.

Every person needs access to a water service, a power service, a sewage service, a food service all of which can be delivered cheap enough. After that it is about a sleeping system and a work station and some extra room in which to swing the cat. Toss out the land budget and it is all modest. The real creativity comes in designing effective storage.

Every other need can be part of a shared environment because they normally call for social access anyway. Some will challenge the need for internalized food handling and other aspects, but I think the need for a private space should never be compromised and it happens to be cheap enough.

This all works best for a couple and two work spaces and singles usually want that option also.

It has all been worked around for years, but key is to produce a quality experience or it will simply fail.


My husband and I think we’ve found a way to pay off our mortgage early, without taking on an extra job or working nights. We’ve decided to construct a rental unit — a “mother-in-law suite” — within our home. If it pans out as we hope, the rental income will let us pay off our loan 10 years early. And who knows: It could give us a chance to live closer to family as we, or they, get on in years.

Jason and I are not alone; lots of folks across the country are experimenting with adding a second (or third) dwelling to an existing single-family home. And in perhaps the most interesting development, more and more people are choosing to buck the “bigger is better” trend in North American housing.

Ranging from 800 square feet to less than 100 square feet — a far cry from the 1,000 square feet per person that has become the North American norm — these “doll houses” take many shapes and sizes. And the people who live in them are as diverse as the homes themselves. Some hope to save money on housing; others hope to “live green” by choosing a smaller space; some are trading living space for a neighborhood they love; and others want to live closer to family or friends.

Here are some of their stories.

Jay Shafer, a founding father of the tiny home movement and a co-owner of the Tumbleweed Tiny House Company, told the BBC: “People are thinking more about what really is a luxury now. Is it a 30-year mortgage, or is it just living simply and having the time to do more of what you want? And I think a lot of people are starting to really change their idea of the American Dream.”

Dee Williams decided to rethink her American Dream after building a school in Guatemala and having a close friend get cancer made her reevaluate her priorities. “He was getting sicker and sicker, and I didn’t have the time or the money to really throw myself into helping him. I was spending a lot of time and money on my house. So the house was the easiest thing to try to get rid of,” Williams told Yes! magazine. So she sold her 1,500-square-foot Portland home and built an 84-square-foot tiny home for $10,000. Now she lives without a mortgage, giving her the time and money to invest in her friends and community.

Akua Schatz and Brendon Purdy’s dream was to live near relatives, but they couldn’t afford a home in Vancouver, B.C.’s Dunbar neighborhood. Instead of moving to the suburbs, they decided to build a 500-square-foot laneway home in Purdy’s parents’ backyard. In a city where the average home price is $725,086, Schatz and Purdy spent $280,000 to build their home.

There’s another plus to their backyard home: Schatz and Purdy have babysitters just feet away from their front door. “It’s really a North American concept to have success tied to moving away or distancing yourself, so maybe we’re reinventing what it means to be successful, and that means keeping family close,” Schatz suggests in this video from CTV news.

But unlike Schatz and Purdy, who plan to eventually switch places with Purdy’s parents and live in the larger home as their family grows, Jon and Ryah Dietzen moved from their 1,500-square-foot home to a 400-square-foot cottage with two toddlers. They made the move for its financial freedom, but the benefits didn’t stop there. “We realized after a few months how much time, freedom, and peace we were gaining by not collecting and spending our time taking care of more ‘stuff,’” Jon Dietzen told me. By choosing a smaller house, they found a better balance between work and home life.

As homeowners build small dwellings, they provide lower-cost housing within the existing fabric of their neighborhood, with no government support necessary. Vancouver’s planning director, Brent Toderian, sees this as the essential value of the trend towards small homes: “[It’s] about ordinary people. Thousands of individual homeowners can do it, one by one by one. It’s publicly propelled, not corporate-propelled, densification. It’s gradual. It’s discreet. It’s green.”

Now that many cities have figured out backyard cottage rules, they face a new challenge: dealing with homes even tinier than the typical accessory dwelling. Some cities’ regulations set minimum size requirements for dwellings. Others say a recreational vehicle can’t count as an accessory dwelling unit, which means “you can camp in your little house, but not live in it,” writes Dee Williams. Tiny houser Lina Menard suggests that “people should have the right to a tiny house as long as it accommodates their needs and desires.” But for people to exercise that right, cities will have to rethink the zoning rules that stand in the way of tiny homes.

After a year in a 120-square-foot tiny home, Menard has a good idea of how to live well in a small space. “I think one of the biggest lessons I’ve learned is that I’m much happier when I live with just the things I like best. My relationship to stuff has shifted dramatically over the past year and a half. I’m much less materialistic than I used to be. But I really appreciate the little touches, too. It’s not about deprivation, but about intention,” Menard told me.

She recognizes that tiny-home living isn’t for everyone, but thinks there’s a way to broaden its appeal: the “cohousing” model, where tiny homes would be coupled with shared kitchens, laundry facilities, guest rooms, and even amenities like barbeques, workshops, and gardens. “Tiny cohousing would just push the envelope,” Menard writes in her blog. “People who lived in a tiny house community would have access to all these things, but they wouldn’t have to own all these things themselves,” Menard explains.

The Sabin Green cohousing community brings Spevak’s goals to fruition. Sabin Green includes four homes, built on a 75-by-100-foot lot. The lot had a single-family home and detached garage. The single-family home remains, but the detached garage was converted into a 600-square-foot cottage. A second home and a 600-square-foot accessory dwelling were built as well. The four homes face onto a central courtyard, but they also have access to shared gardens, a community room with space for visitors, and a bike storage shed. The sharing doesn’t stop with physical improvements: Residents also use just one internet service, share a newspaper subscription, and meet for weekly dinners.

The new view from the street.

The project is home to a diverse group, including a young couple, retirees, a single woman, and a small family. Residents Laura Ford and Josh Devine paid just under $150,000 for their 530-square-foot home. They downsized from a 700-square-foot apartment, but see the loss of square footage as worth the cost. “If you live by yourself, you might not be able to afford the brick plaza, the teahouse, the gardens,” Devine told The Oregonian.

Ruth’s Garden Cottages — covered by Sightline here — takes tiny-home communities to another level. On a 50-by-100-foot lot in Northeast Portland that housed one small dwelling, Orange Splotadded two tiny cottages, each less than 200 square feet in size. The miniature structures have room for a sleeping loft, a bathroom, and a well-proportioned front porch. The cottages make use of the kitchen in the main home. A shared garden takes up the front 50 feet of the lot.

The recession and housing crisis, combined with changing demographics, have led many of us to reevaluate what we want in a home. More and more folks are looking for homes within walking distance of jobs, stores, and transit — and have proven willing to trade square footage for a vibrant neighborhood. At the same time, millennials increasingly look for alternatives to the car; baby boomers have reached the age where they don’t need a big home in the ‘burbs; and more and more families are choosing to live in multi-generational households.

Tiny houses are a great solution for all these needs. So whether you are a recent graduate wanting to be free from high rent, or a family looking to live without a mortgage, or you want to turn your detached garage into a mother-in-law suite, a small home might be for you. As Marcus Barksdale, who built his own small home in Asheville, N.C., said in this interview: “It would be really neat if more people sought to have smaller spaces, because it would free them up for a larger life.”

Alyse Nelson is a city planner for a small town in Kitsap County, Wash.

I love the tiny home movement. It sparks creativity and imagination.