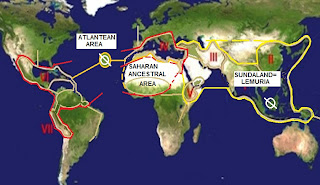 This is a revisit to an important problem. Sea bed work has shown us that during the Bronze Age or between 4000 BC through 1000BC, that the Northern Atlantic surface waters were two degrees warmer. My conjecture, albeit unsatisfactory was that the Sahara and the Middle East had remained vegetated during most of this and retained more warmth that somehow fed back to the ocean.

We have recently come to understand that the 1159BC geological event was vastly more important than I had ever suspected. Land masses the size of Ireland, France, Britain and Japan associated with the Mid Atlantic Ridge, the Bahama Bank and the Cuban Ridge to Yucatan subsided over a couple of days. This was a correction in the crust that offset the one mile or so rise of the Hudson Bay Basin and the related hydrostatic imbalance.

This strengthened the volume available to the Gulf Stream and also improved heat flow directly into the Arctic resulting in a cooler Atlantic.

This turned out to be a minor adjustment in the Holocene regime and it is geologically stable although we cannot write of minor subsidence still. We should be stable for millions of years matching that of the Cretaceous were the Tethys Sea ruled.

It is really quite a remarkable dispensation. The narrow Atlantic provides us a heat pump sufficient to eliminate Ice Age Conditions in the Northern Hemisphere while the Pacific remains cut of from either the Arctic or the Atlantic and exchanges heat with the conveniently located Antarctic Ice Age. All remaining lands in the Southern Hemisphere are well north to allow easy development.

All that we have left to do is to reforest the Sahara and the Middle East and clean up the odd mess.
Posted by arclein at 12:00 AM

Uncredited map is by Dale Drinnon, meant to show conditions at the OPENING of the Holocene and establishment of early NEOLITHIC (which is what the roman numerals are for. The Empty Set signs do indeed indicate land area subsidences.)The original placement of the map on my blog specified all of these things. And if you wanted a BronzeAge Catastrophe map, all you needed to do was ask.

Just grabbed an available image here. What is really important is that the scope of the affected lands is continuing to expand.

The whole subsidence of the Gulf of Mexico and the Carribean basin was partial at the time of the Pleistocene Nonconformity in 13900 BP. This subsidence continued as the Ice sheet collapsed and Hudson Bay rose.

It reasonably went through several stages of subsidence which is what we know from 'cultural' sources.

I continue to be surprised to find that cultural sources are been fully validated far beyond any conservative(mine) expectation.

I think that it is time to collaborate on a series of maps that use volumetric estimates and curvature distortion to establish probable events.

If you'd like me to collaborate on making some maps, making maps is one thing I DO. email me privately and we will discuss it (I apologise if I have missed any emails from you on the subject)

"Just grabbing any old map" won't do, you know, especially if it is one of mine. But OK, we can work on this.