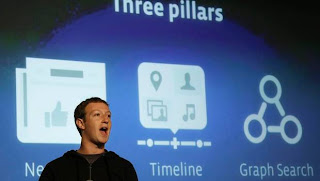 Facebook is capable of becoming the richest company on Earth. At least I know just how to make that happen. I am sure that they will also figure it out sooner or later. In the meantime an effective search engine using the system's strengths is a pretty good place to begin. The tool can in time become a driver to participation.

Social media is back boned by Facebook. It is reconnecting the unconnected and single handedly resetting the mental health landscape. It allows concerned families to track other members when necessary. We are also discovering that the disturbed make signals that allows intervention to occur. It is becoming harder to slip between the cracks of our social world and disappear into ourselves. This is a great good that we can add to our understanding of the computer revolution.

We are not just sharing knowledge, but we are now sharing intent. Facebook can tap that.


Inside a new Facebook search – the good, the bad and the creepy Add to …


I’m staring at my computer screen, completely paralyzed by which words to type into the search field.
It’s been years since such a simple task has rendered me useless. The last time I couldn’t think of anything to type was back when Napster was illegal, and my brain would shut down every time I tried to think of another low-quality song to add to my collection of zillions.

This is different though. I’m not stealing music this time (Metallica put an end to that with a tersely worded e-mail), I’m about to use Facebook’s new search function to do a deep dive into the personal lives of my friends.

The search function was announced yesterday, and most of its initial invitations will go out to American users. But Canadians are also eligible to join the beta testing, provided their language preference is set to “American English.” I’ve managed to jump the queue, and I’m feeling the pressure to do some quality searching.

Every small piece of information my friends have shared with the social network site over the years is nothing more than another data point to be retrieved and analyzed. I can learn all kinds of things, maybe.

But first, I need a question.

Part of the problem is that there is nothing like Facebook’s Graph Search. When you ask Google a question, it searches the entirety of the Internet and comes back with the mathematically perfect answer to your query. This is entirely different – I’m not asking the world for an answer with Facebook search, I’m asking my jerk friends.

I’ve locked in on books, since I’ve read everything on my e-reader and may get a few minutes later to read something new. I could just Google “top selling books” or something, but instead I ask Facebook which books my friends have liked. This is a literal query – it tells me exactly who has clicked the “like” button for which books.

Already, I’m learning things. I had no idea so many friends were fans ofEat It: A Literary Cookbook of Food, Sex and Feminism . I’m also a little annoyed by how many of them clicked “like” to let the world to know how much they appreciated The Catcher in the Rye.

These searches are the heart of the service. Any computer algorithm can tell you which movies are playing down the street and direct you to a website where angry basement dwellers bash out blog entries about why each movie sucked.

But finding out which movies your relatively close friends have spent money on lately? That’s useful information – especially if you are actually friends with the people on your Facebook list and there’s an outside chance you speak to them in real life.

That’s the social way to use the search function. The anti-social way is also pretty time consuming. Everything any of your friends has ever liked is searchable, and by using the options provided you can start to see patterns.

Ever wondered how many of your friends live in Winnipeg? How about how many of them are female and in an open relationship? (It turns out the answer is zero, at least in my case).

Which brings up a key point – the search is only as good as the information users share, and those worried about privacy can make themselves unsearchable. At one point Facebook recommends I search my best friend’s history to determine his political affiliation. When I agree, it tells me he doesn’t have one.

So in theory, nobody should be able to find something about you that you hadn’t already shared.

And then it hits me – I’ve figured out what to search. I’m going to spend the next few hours Facebooking myself. Who knows what I might learn when I start studying my patterns?