Mastering the Science of Mass Persuasion 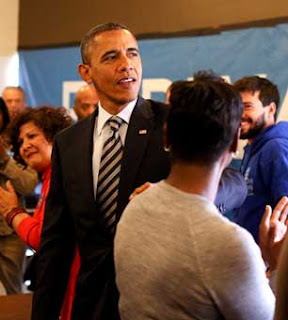 This needs to be understood. Data mining has reached the point that it can predict your behavior with serious accuracy. The unanswered question here is just how much investment in time and money is needed to provide this data?

I ask that because the political cauldron has seen a no holds barred dash to the finish line at what is becoming catastrophic expense. Most of that money is outright wasted although no contractor will ever let on. In fact it has become an advertising war contributing little to understanding the candidates.

Obama is a great example. During the first campaign, he was kept in a bubble to hide many controversial aspects of his history. These have never been examined and will never be. We were sold a feel good story that certainly had its high points. Yet that is true for any candidate who gets up there.

What we now have is gladiatorial rather than magisterial. It is a money fueled race to the bottom that is barbaric and only works in the minds of the advertisers who sell this nonsense.

Recall that the popular vote itself shifts no more than zero to three points in either direction around the mean of fifty fifty. What this means is that all this noise and effort is targeted at one to two folks out of every hundred who will vote. The rest are voting the same old way.

This approach then allows the campaign to identify the must sees. A mutual program to advertise and conduct civil discourse would be better for all under a tight set of rules and would get the same result while allow the focus to go on the folks who do need persuasion.


Team Obama Mastered the Science of Mass Persuasion - And Won

Eric Siegel opens a window on the new marketing technologies of persuasion modeling and predictive analytics successfully used in the Obama re-election campaign.

Last October, a colleague and I speculated on how a special, powerful form of predictive analytics would revolutionize presidential campaigning - and, if successful, how it might be poorly received by the public thereafter. In our work, he and I focus more on financial, marketing and online applications of this technology. But we had bet the story would not break within politics until the years 2016 or 2020.

Surprise: There's no wait! Since Obama's win in November, we've learned they already did this. The president won reelection with the help of the science of mass persuasion, a very particular, advanced use of  predictive analytics, which is technology that produces a prediction for each individual customer, patient or voter.

This may be the first story ever of a presidential campaign performing and proving the effectiveness of mass scientific persuasion.

The technology's purpose is to predict for each individual and act on each prediction. But you may be surprised to know what the Obama campaign analytics team predicted. In this persuasion project, they did not predict:

Who would vote Obama

Who would vote Romney

Who would turn out to vote at all

Instead, they predicted persuasion:

This is the new microcosmic battleground of political campaigns - significantly more refined than the ill-defined concept of "swing voter."

Put another way, they predicted: For which voters campaign contact would make a difference. Who is influenceable, susceptible to appeal? If a constituent were already destined to vote for Obama, contact would be a waste. If an individual was predicted as more likely swayed toward Obama by contact than not swayed at all, they were added to the "to-contact" list. Finally, to top it off, if the voter was predicted to be negatively influenced by a knock on the door - a backfired attempt to convince - he or she was removed from the campaign volunteers' contact list and labeled: "Do-not-disturb!"

I interviewed in detail Rayid Ghani, chief data scientist of Obama for America - who will be keynoting on this work at Predictive Analytics World in San Francisco (April 14-19) and Chicago (June 11-12) - for my forthcoming book.

To make this campaigning possible, team Obama first collected data on how contact (door knocks, calls, direct mail) faired across voters within swing states. Of course, such contact normally helps more than it hurts. But, since the number of volunteers to pound the pavements and dial phones is limited, targeting their efforts where it counts - where contact actually makes a difference - meant more Obama votes. The same army of Obama activists was suddenly much stronger, simply by issuing more intelligent command.

Therefore, they used the collected data not just to measure the overall effectiveness of campaigning, but to predict the persuadability of individual swing state constituents. Each person got a score, and the scores drove the army of volunteers' every move.

Persuasion modeling (aka uplift modeling or net lift modeling) has been honed in recent years for use in marketing. It's the same principle as for political campaigning, guiding calls and direct mail just the same (although marketing more rarely employs door knocks) - but selling a product rather than a president.

I've extensively covered this technology, which is more advanced than "regular" predictive analytics. Normally, you predict human behavior like click, buy, lie, or die. In this case, you predict the ability to influence said behavior.

If consumer advocates consider mass marketing a form of manipulation, they may find in this work even more to complain about. Was the election Moneyballed? As mere mortals, are we consumers, patients and voters too susceptible to the invisible powers of advanced mathematics? Will privacy proponents whip out their favorite adjective-of-concern, "creepy"? Shouldn't elections be about policies, not number-crunching?

No question, the power of persuasion prediction is poignant. Industries are salivating and pouncing.

How can this power be harnessed without doing harm? And how is "harm" to be defined in this arena?
For more information about predictive analytics, see the Predictive Analytics Guide; for more on persuasion modeling see this whitepaper.