Attack of the GM Mosquitos 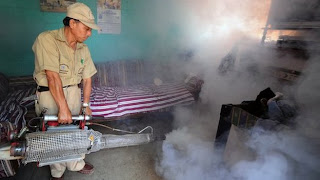 It appears that this protocol is working well enough to seriously suppress targeted mosquito populations. It is at least as effective as a pesticide program that inevitably leaves gaps in coverage and destroys no end of non targeted species.

In fact it is working well enough to be universally applied. The present heat is motivated by the subclass of anti GM agitators who have had ample success demonizing genetic modification and will not quit over the bodies of millions of malaria victims.

This happens to be the one solution that is simply good enough. The enemy will no go extinct so easy, but suppressed populations combined with other standards of care means a huge lowering of disease incidence. It is not yet perfect and that takes a magic bullet or vaccine.

In the bigger picture, mosquito population suppression is to be wished for along with certain other insects. In all these cases, the predator population is unsuccessful in maintaining balance of any kind.

Can genetically modified mosquitoes prevent disease in the US?


After a summer of record-high temperatures in the US in 2012, health officials are still dealing with the repercussions of mosquito-borne diseases. Could genetically-modified insects halt their spread?

The year 2012 ended with an ignoble distinction. According to the United States' Centers for Disease Control and Prevention (CDCP), it was the worst year for West Nile virus since 2003.

The CDCP says record-high temperatures could well have helped the mosquitoes that transmit the disease to thrive.

At the same time, new outbreaks of dengue fever on the Mexican side of the Texas-Mexico border had US officials worried that the virus would slowly spread north.

And experts fear that in 2013, it's only going to get worse.

A British company, Oxitec, has come up with a plan to control the bugs and combat dengue fever. Its scientists have designed genetically modified mosquitoes that have one mission - to kill off the rest of their species.

But is the plan too radical for its own good?

The World Health Organization says dengue ranks as the most important mosquito-borne viral disease in the world. In the last 50 years, incidence has increased 30-fold.

It is now endemic in Puerto Rico and in many popular tourist destinations in Latin America and South East Asia.

West Nile virus was first identified in Africa in the 1930s, before spreading out from there and appearing in North America in 1999. It is now widely established from Canada to Venezuela.

Climate change and globalisation could be major factors behind the increase in mosquito-borne diseases in the US and elsewhere.

Walter Tabachnick, director of the Florida Medical Entomology Laboratory at the University of Florida, says warmer and wetter conditions can make it easier for some mosquitoes to multiply and spread disease.

At the same time, greater and faster movement of humans and cargo allows more infected people and mosquitoes to come into contact with previously unaffected populations and areas.


In the US the current method of keeping mosquito populations under control is to spray their larvae with pesticides.

This method is only effective when the larvae can actually be found and reached by the spray.

Unsprayed eggs can survive for months before hatching. Meanwhile, resistance to the pesticides among mosquitoes is rising.

These mosquitoes are created by injecting mosquito eggs in the lab with a killer gene. It produces a protein called tTA, which stops the mosquitoes' cells from turning on other genes which are essential for the bugs to survive.

The resulting GM male mosquitoes are then released into the wild to breed with non-GM females, producing offspring genetically programmed to die well before reproductive age.

The company says that as the number of GM males introduced into an environment increases, the lower the chances the non-GM males have of breeding with non-GM females, until eventually the mosquito population can be effectively eliminated.

Oxitec says it has done tests in Brazil, Malaysia and the Cayman Islands, which show mosquito numbers can be greatly reduced in a few months.

"You first release a few thousand males to see if they will mate, then you move to a control programme. In the Cayman Islands we released 3 million over a few months over 16 hectares. We effectively brought the overall mosquito population down by 80% in three months," Oxitec's CEO Haydn Parry told BBC World Service.

While only GM males are intentionally released, critics point out and Oxitec acknowledges that the release of a small number of GM females cannot be avoided. The males are filtered out for release from the generally bigger females, but some females slip through the net. It is only the female mosquitoes which bite and spread disease.

However, Mr Parry says the small number of GM females that do get released present no danger even if they bite humans. "It's exactly the same as being bitten by a wild one," he says. "The gene, or protein, that prevents the next generation from surviving isn't toxic or allergenic and isn't expressed by the saliva glands" and therefore is not injected into humans when they are bitten.

The released GM mosquitoes can breed due to the presence in the lab of the antibiotic tetracycline - which is used in agriculture and found in some meat - which stops the protein from working.

Eric Hoffman, a biotechnology campaigner for Friends of the Earth in the US, says that if tetracycline is present in the wild the offspring of GM mosquitoes could survive and breed.

Mr Parry says his company's GM mosquitoes have been shown to be safe and that it would not introduce them where tetracycline exists in the environment. "We created this strain of mosquito more than 10 years ago now. You do a lot of internal testing in labs in a contained environment even before going to an outside environment," he says.

Coming to the US?

Oxitec wants to use its technique on the Aedes aegypti mosquitoes in Key West to prevent a recurrence of dengue fever in Florida. The state suffered its first outbreaks of the disease in 75 years in 2009 and 2010 in Key West. Oxitec has the backing of The Florida Keys Mosquito Control District, which is in charge of mosquito control for the area.


However it has come up against opposition, in the form of a petition started by local resident Mila de Mier and signed by nearly 120,000 people - more than four times Key West's permanent population. It raises concerns about the effect the GM mosquitoes will have on the local environment, animals and insects.

The Key West City Commission has passed a non-binding resolution against the plan, saying it wants to see further research, demonstrable and measurable outcomes and federal approval before giving its backing.

The issue is now in the hands of the federal Food and Drug Administration who have to give their approval before the plan can go ahead.

It has set no date for its decision. In the mean time, the problem of mosquito-born diseases in the US continue.

WOW...Gotta protect the poor mosquito?
How many people will needlessly suffer disease and death this year due to this attitude ?