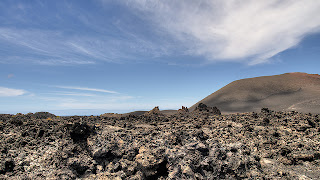 This certainly tightens up the linkage to the Siberian Traps in providing an explanation for the Permian Extinction. A near continuous influx of nickel rich ash would be feasible here. More work needs to be done to tighten this up but it certainly looks good.

One thing that has not happened in human history is a serious flood basalt that is regional in scope. However, what is operating in Hawaii may in fact be as good as it actually gets. It may need a massive impact to make a serious difference. I would like to see a convincing study of these events that explains how they come to surface at all when continents are supposed to be sitting on top of them.

In the nonce we have workable time line and a causation agent. It may well stand the test of time.

Was Earth’s most devastating mass extinction caused by a single microbe?


That's the intriguing new hypothesis put forward to explain the Permian mass extinction, which wiped out more than 90% of all Earth's species 251 million years ago. And we even know which microbe is responsible for this omnicidal annihilation.

MIT researcher Daniel Rothman has proposed this idea based on his analysis of sediment samples dating back to the very end of the Permian. The samples seem to suggest that carbon levels rose very quickly, and no known geological process — including a volcanic eruption or a meteorite impact, two common explanations proposed for the Permian extinction — could account for it. However, a microbe could account for that kind of spike in carbon levels. Writing for New Scientist, Sara Reardon explains how Rothman identified the likely culprit:

When Rothman's group analysed the genome of Methanosarcina - a methanogen responsible for most of Earth's biogenic methane today - they discovered that the microbe gained this ability about 231 million years ago. The date was close to that of the mass extinction, but not close enough to suggest a link. But Methanosarcinaneeds large amounts of nickel to produce methane quickly. When the team went back to their sediment cores, they discovered that nickel levels spiked almost exactly 251 million years ago - probably because the Siberian lavas were rich in the metal.

Of course, this hypothesis is far from confirmed, and the dates in the geological will probably need to line up better than that before this really starts gaining credence. Either way,Methanosarcina wouldn't have been able to devastate Earth's biosphere if not for the availability of that nickel-rich lava, so the volcanoes aren't off the hook here just yet. But, if this is true, then I think Methanosarcina has taken a very strong step towards being the biggest assholes in the history of our planet. Then again, biologists are pretty much certain that we humans are driving the current loss of biodiversity that might well become the next mass extinction... so we're not exactly off the hook either.