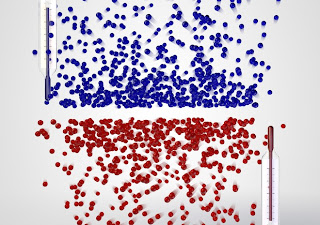 Quite reasonably, we will have different quantum states around the average we call absolute zero.  The point here is that we are successfully working at this and seeing interesting results.

It also reminds us that absolute zero is arbitrarily attached to atoms and not elementary particles who all like to beat about at a fraction of light speed.  There is a whole new concept of temperatures in these realms that is surely lower that absolute zero so we certainly have not seen the last of this or possibly even the beginning.

CONJECTURE:   Absolute zero for elementary particles can be described as the rest state of dark matter in the form of neutral neutrinos not reacting with other such particles and not retaining non bounded curvature (my definition in unpublished paper) and denoted usefully as ABSfp.

How to relate that to an atom containing thousands of such elementary particles buzzing about at fractional light speed I leave as a problem for the diligent student since I have not thought about it yet.

Physicists have created a quantum gas capable of reaching temperatures below absolute zero, paving the way for future quantum inventions.

The chilly substance was composed of potassium atoms which were held in a lattice arrangement using a combination of lasers and magnetic fields. According to a news report in the journal Nature, by tweaking the magnetic fields the research team were able to force the atoms to attract rather than repel one another and reveal the sub-absolute zero properties of the gas.

“This suddenly shifts the atoms from their most stable, lowest-energy state to the highest possible energy state, before they can react,” said Ulrich Schneider of the in to Nature. “It’s like walking through a valley, then instantly finding yourself on the mountain peak.”

Previously absolute zero was considered to be the theoretical lower limit of temperature as temperature correlates with the average amount of energy of the substance’s particles. At absolute zero particles were thought to have zero energy.

Moving into the sub-absolute zero realm, matter begins to display odd properties. Clouds of atoms drift upwards instead of down, while the atomic matrix’s ability to resist collapsing in on itself echoes the forces causing the universe to expand outwards rather than contracting under the influence of gravity.

The ability to produce a relatively stable substance at several billionths of a Kelvin below absolute zero will allow physicists to better study and understand this curious state, possibly leading to other innovations.

“This may be a way to create new forms of matter in the laboratory,” said Wolfgang Ketterle, a Nobel laureate at MIT, commenting in Nature on the results.