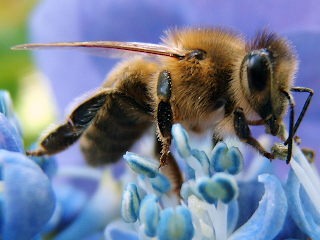 In 2007, I posted here that the linkage between this pesticide protocol and Colony Collapse Disorder was clear and obviously understood by the proponents merely by the way the studies were been obviously gamed.  Since then the Bee keeping industry is wise and has been assiduously avoiding the risk as much as they are able.

In the meantime the industry has continued to stonewall while they keep selling.  Major bans are in place in parts of and this particular study makes the case as clear as possible while still remaining polite.  It should be obvious that any pesticides too dangerous for bees have no place in field agriculture were interacting with bees, both tame and wild becomes inevitable.

Yet were are the class action suits and the outrage?

We have already gone a full five years and anyone able to comment has stepped up and said as much.  This needs to be banned.

One thing that this blog has allowed me to do is pick up on obvious misdirected science at work and related industry stonewalling to cover up serious mistakes.  It is no longer even about the profits involved which are often slight enough but about tort avoidance.

Are you sick of hearing about colony collapse? Hey, me too! But I’m guessing the bees are even more fed up at this point.

For the first time, ’s food safety agency this week officially labeled the world’s most popular insecticide, imidacloprid, as so dangerous as to be unacceptable for use on crops pollinated by bees, though the body lacks the power to ban the chemical. The report also called into question two other types of neonicotinoid pesticides. All three sound super-evil.

[Imidacloprid's] manufacturer, Bayer, claimed the report, released on Wednesday, did not alter existing risk assessments and warned against “over-interpretation of the precautionary principle”.

The report comes just months after the government dismissed a fast-growing body of evidence of harm to bees as insufficient to justify banning the chemicals. …

Scientists at the European Food Safety Authority (EFSA), together with experts from across , concluded on Wednesday that for imidacloprid “only uses on crops not attractive to honeybees were considered acceptable” because of exposure through nectar and pollen. Such crops include oil seed rape, corn and sunflowers. EFSA was asked to consider the acute and chronic effects on bee larvae, bee behaviour and the colony as a whole, and the risks posed by sub-lethal doses. But it found a widespread lack of information in many areas and had stated previously that current “simplistic” regulations contained “major weaknesses”.

Bayer and other chemical giants published their own report this week, claiming that banning neonicotinoids would cost farmers hundreds of millions. But neonicotinoid manufacturers will still have to give the European Commission a response to the EFSA report by the end of this month, and the Commissioncould actually possibly maybe ban the pesticides.

The Environmental Protection Agency and Department of Agriculturehave expressed concern over the chemicals in the past, but pretty much stopped there — at concern. And then approval. And then widespread spraying on just about everything we and the bees eat!

The EFSA isn’t a regulatory board, just an advisory one, so the E.U. doesn’t have to listen to its warnings. But bee health seems to be EFSA’s jam, and it’s not likely to back down. Last summer, the organization put together this video on all the threats to our tiny, stingy, pollinatey pals. It’s as cute as it is horrifying.

The more we learn about exactly what’s killing all the bees, the more the problem seems fixable, at least in theory. If the E.U. really goes to war with big chemical companies over tiny bees, it could be a game-changer. Meanwhile, the will be over here, still spraying with abandon.
Susie Cagle writes and draws news for Grist. She also writes and draws tweets forTwitter.