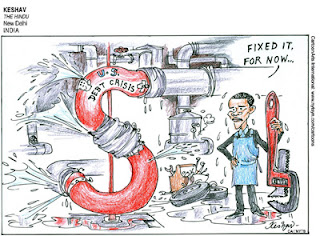 No, there will be no hyperinflation simply because we have been deflating a credit bubble by printing the necessary money to covered the accumulated losses built up to 2008 that became real losses then.

Hyperinflation occurs when the demand for money is flooded way past the absorption rate of the economy. To happen it is necessary to distribute this hot coin widely. Try doubling pension payouts for example. Big ticket items simply will not do it because the real market is too small. All other ways are quickly sponged up in the financial products system to be doled out prudently at a later date.

No such conditions are ever likely to occur.

Our real problem is credit restoration for millions of people. This will restore demand for housing and restore broad employment for those same millions ruined by reckless lending. As I have posted before, we are doing it all the long way around. It could have been over and done with but it has only begun to properly heal now with the banking system reentering the mortgage market. Quite naturally they waited until all the bad news had landed before they stepped back in.

Some readers may recall the Peter-Schiff-was-right campaign of 2009, a sort of public-relations blitz claiming that Mr. Schiff, an Austrian-oriented commentator, had foreseen the financial crisis. It wasn’t really true even then; still, Mr. Schiff became a fixture of right-wing television shows, constantly warning that expansionary monetary and fiscal policies were about to produce hyperinflation.

Well, Cullen Roche, who writes the Pragmatic Capitalism blog, recently caught a TV host actually putting Mr. Schiff on the spot, pointing out that he’s been predicting that hyperinflation since 2008. So where is it?

And I’d like to pursue the question a bit more, not just or even mainly about Mr. Schiff’s assertions, but more broadly about the role of predictions — including wrong predictions — in economics.

What’s crucial to understand, I think, is that there are two kinds of erroneous predictions. One kind of error, which everyone makes all the time, involves what you might call extraneous forces.

If the economist making the prediction didn’t know that there was going to be a war in the Middle East, or a confrontation over the debt ceiling, or whatever, his forecast may well be very badly wrong; too bad, but that doesn’t really speak to his underlying model. And by the way, this exoneration applies even if he should have known what was coming; all this says is that he may not be the right person to listen to for short-run forecasts, which doesn’t necessarily say that he’s wrong about the bigger issues.

Here’s an example of a ludicrously wrong forecast that didn’t touch the fundamentals: In 1929 the great American economist Irving Fisher famously declared that stocks had reached a permanently high plateau; worse yet, he attributed this rosy future to the productivity gains resulting from Prohibition. He ended up looking like a fool because, well, in some ways he was.

Yet none of this had anything to do with his fundamental economic analysis; Mr. Fisher’s theory of the interest rate and his theory of debt deflation are essential tools for anyone trying to do serious macroeconomics.

Now, the thing about Mr. Schiff and all the other Austrians predicting runaway inflation is that they were right to make this prediction, given their model. If you believe that a recession is caused by a failure on the production side of the economy, the result of past malinvestment or something, you will likely also believe that any attempt to correct this decline by expanding credit will simply result in too much money chasing too few goods, and hence a lot of inflation.

By the same token, the failure of high inflation to materialize amounts to a decisive rebuttal of that model. (And no, it’s not because the numbers are fudged; independent estimates don’t differ significantly from official inflation figures.)

More generally, the past five years have seen some really dramatic policy actions — huge expansion of the Federal Reserve’s balance sheet, and in some countries very large deficits or drastic austerity measures. These kinds of actions are, in effect, natural experiments that give economists a lot of information about the validity of different economic models — and the models that have worked are demand-side, more or less Keynesian approaches, while everything else has been wildly wrong. So here’s what should have happened: economists propounding these other approaches should have said, “Gosh, I seem to have been wrong. I need to rethink my approach.”

Oh, and by the way, I have done that. As I’ve written before, I rethought my views about liquidity traps and currency crises after the Asian crisis of the late 1990s; I rethought my views about advanced country debt and deficits after making a wrong prediction in 2003 (although in that case my mistake was in not taking my own model seriously enough). But as far as I can tell, very, very few people have been willing to let the evidence speak.

Well, since the 2008 crash, we've had double-digit inflation, which the government and the media pretend never happened.

I love it when someone thinks that the world revolves around them. Try barchart.com and see how prices have changed sincd 2008. Wheat down 50%, coran about the same, gasoline about the same, Silver up 50%, but copper about the same. Cattle up 30%, Hogs about the same, Cotton up 30%, Lumber up 50%. Nothing has come close to doubling.

So, either Sharon J is lying, or lives in some weird part of the country. Maybe ND or some other area where Fracking has driven up the price of everything

I love it when someone thinks that the world revolves around them. Try barchart.com and see how prices have changed sincd 2008. Wheat down 50%, coran about the same, gasoline about the same, Silver up 50%, but copper about the same. Cattle up 30%, Hogs about the same, Cotton up 30%, Lumber up 50%. Nothing has come close to doubling.

So, either Sharon J is lying, or lives in some weird part of the country. Maybe ND or some other area where Fracking has driven up the price of everything