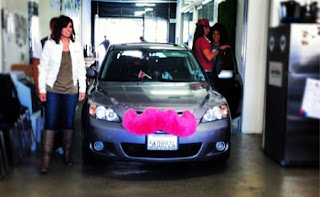 This is all about sharing mobility and using modern communication to manage it all. Applying it to other services is surely plausible if it can be cost effective and also secure. We have a huge amount of under used capacity out there that can be tapped cheaply.

The hard part is trusting the random user. That needs to be well sorted out and damage control has to be as convenient. Do that and confidence will soon make it a winner.

We will watch this phenomena over the next couple of years to see just how it does shake out. All the problems will need to be well worked out and the automotive industry has the best handle on this.


This year, ride-sharing services Lyft and Sidecar amassed millions in new funding. Uber, which lets passengers hail idle town cars with their smartphones, expanded to new cities from San Francisco to New York. And Airbnb, which makes it easy for people to rent out their homes or rooms for short periods, expects to be filling more rooms per night than Hilton by the end of the year.

And yet, in a number of cities across the country, these businesses are illegal. New things are scary. And new things that grow really fast are the scariest.

2012 saw increased acceptance and growth in sharing and peer-to-peer businesses, presenting new options for consumers and new problems for established businesses and government regulators. As these new businesses grew, so did their collective disruptive force.

As Tim Wu wrote at The New York Times, “Change isn’t always pretty, but a healthy city is one where old systems — even the hallowed taxi medallion — stand to be challenged by the winds of creative destruction.”

New tech makes these businesses possible, but their sustained success doesn’t hinge on advances in smartphone design or social networking. We’re choosing peer-to-peer because we want to do business differently. We actually kind of want to pretend like we’re not doing business at all.

Lyft and Sidecar enable individuals with their own cars to find and drive customers, keeping the majority of the fare with a small chunk going to the company.

“The big difference between the Lyft experience and the cab experience is supposedly friendliness. That’s why they bill themselves as ‘your friend with a car,’” Lyft driver Kate Dollarhyde told me. “A lot of my customers tell me they prefer Lyft because they feel more safe than they do in cabs, and also because they feel they can talk to and make friends with drivers.”

In an increasingly inhospitable, unfriendly world, peer-to-peer business sells you on, well, your peers. Lyft, which launched in San Francisco this summer with plans to expand into Seattle and Los Angeles in 2013, is selling community. But it’s also selling savings. Dollarhyde says Lyft trains drivers to inform customers that the rides cost about $4 less than a cab.

Even with those lower fares, Lyft can be a real source of income for drivers: “I make more money driving for Lyft per hour than I have doing anything else,” said Dollarhyde.

Airbnb can also be a significant moneymaker for participants. ”Ultimately, we want to empower people and we have thousands of people around the world that are making an incredible, meaningful amount of revenue,” Airbnb cofounder and CEO Brian Chesky told CBS. “We’ve helped thousands of people stay in their homes.”

Peer-to-peer business also empowers service providers to not provide services to clients with bad reputations; the companies let participants rate customers as well as car drivers and homeowners. ”At the end of every ride, passengers rate drivers and drivers rate passengers,” Dollarhyde tells me. “Five stars is the baseline; everyone starts out at the top. You deduct stars for rude behavior, like barfing in someone’s car, being a jerk, or generally making a ride uncomfortable.” If a barfy customer ends up with a bad rating, they’ll be peer-pressured out of the system by drivers who just won’t choose to pick them up.

But with great power comes great responsibility. (Sorry, had to.) While Airbnb helped a lot of houseless folks in the wake of Hurricane Sandy, with many people using the service to offer their homes and rooms for free, Uber was slammed for price-gouging during a difficult time.

A number of U.S. cities have banned different peer-to-peer businesses or tried to regulate them out of existence. Officials claim they’re protecting consumers, but Wu says complaints about the companies often “have the odor of industry protectionism.”

“Banning Airbnb helps hotels more than homeowners; banning Uber helps taxi companies more than passengers,” Wu writes. Owners of established businesses often have ties to local politicians, unlike the random guy who wants to rent out his studio while he’s out of town.

Wu suggests more flexible approaches to regulation that hinge on openness and real-time data. “Regulators could simply require Uber to disclose the prices it charged and where its cars were going. If cities wanted to ban rate hikes during emergencies, they could watch to see that the law was obeyed,” he writes. “This kind of precise, data-driven regulation could protect consumers while also protecting their right to pay for a valuable service.”

It could, but governments would have to put their fears aside first. So far, it’s baby steps. Earlier this month, California regulators began an inquiry into how to regulate ride-sharing services.

“We’re cautiously optimistic that the investigation will result in rules that will support innovation and support the benefits that Sidecar represents, which are reductions in emissions and congestion and more affordable transportation options,” Sidecar cofounder Sunil Paul told the San Francisco Examiner.

California’s regulatory commission will deliver its findings in six months — by which time a whole new corner of the peer-to-peer industry will likely be delighting new consumers and frustrating established business owners.