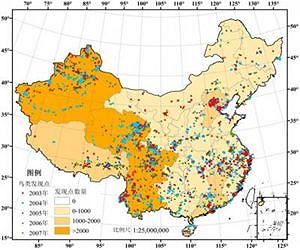 This approach needs to be applied globally. Data needs to be collected confirmed as to quality and posted. Folding in older records will provide a lot of depth and then over time we will have a temperature sensitive distribution map.

It is also something that once established, can be introduced to school children to participate in. I remember as a young lad my own enthusiasm for birds and my collector's instincts. It beat hockey cards. This provides a steady stream of data with some level of teacher supervision. Imagine this at work globally?

Birds also provide early warning when it comes to other ecological changes and data mining a base like this is likely to work very well.


A recent study used bird watching records to build up the first bird watching database in China, which found a batch of new records of national level and a trend of of species moving to higher latitude and higher elevation regions. The study named "Bird Watching in China Reveals Bird Distribution Changes", published in 2012 (31) issue of Chinese Science Bulletin, was senior-authored by LI Xueyan and led by Professor GONG Peng from Ministry of Education Key Laboratory for Earth System Modeling, Center for Earth System Science, Tsinghua University.

In recent years, bird watching becomes more and more popular in China. Besides enjoying the fun of bird watching, recording information about species and population can bring new data for scientific research.

Since bird is one of the most sensitive indicators of ecosystem health, both habitat range and migration route of birds could be affected by global climate change and the most direct impacts come from human activities and global warming. Nowadays the status and trend of bird distribution have drawn a great amount of attention in the field of global change.

However, to date there has been no geographic distribution database of birds that is convenient for spatial-temporal analysis in China. Actually, how to obtain accurate location of geographic names on different scales has been a bottleneck problem of many databases in the field of history, ecology and environmental science.

A spherical GIS software "Global Analyst" (GA) was developed in Peng Gong's group that has been used in establishing China Bird Watching Database (CBWD). Using Google Earth remote sensing images which have high resolution and timely as base map, GA can support place name-querying and also provide abundant information about habitats and geographic ranges for mappers.

The first bird watching database with geographic coordination uses points to represent the data, makes it convenient for update and maintenance, and provides an open platform for crowdsourcing.

Xueyan Li and her collaborators analyzed 30936 records from 2003 to 2007 in CBWD, including 17 Orders, 70 Families and 1078 Species. In terms of globally-threatened species on the IUCN red list, the current database includes four Critically-endangered species, 11 Endangered species, and 44 Vulnerable species (Birdlife International, 2008), whilst also highlighting 27 species in the under Protection Class I (Figure 1).

CBWD includes 14 species which are additions to the national checklist, these new records occur either border on other countries (Yunnan, Sinkiang and Tibet) or are coastal areas (Tianjin and Hebei). 109 species appeared outside their original distributions from 2003 to 2007, show a trend of moving to high latitude and high elevation regions, which provide evidence for researches about ecological response to climate change.

This work is supported by the Major Program of the National Natural Science Foundation of China (Grant No.30590370), National High-tech Research and Development Projects (Grant No.2009AA122000) and The China Conservation Fund of Hong Kong Bird Watching Society.
GONG Peng gong@irsa.ac.cn