Inflatable Module Will be Added to Space Station 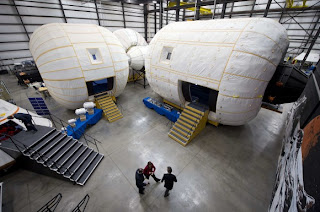 I have posted before extensively on the utility of using rotating bubbles out in space. The skin itself would not rotate, but the goods inside could easily do so around a central axis that acted as a cable stay hub. After that is in place, your imagination runs wild.

So it is good to see an over engineered inflatable device now going up to work out the inevitable issues.

Yet even a Mylar bubble hundreds of yards across could stand in as a safety net and garbage retainer. A few puffs of air would keep it inflated and micrometeorites could simply pass through. If that worked well enough, it provides the skeleton to pad out and strengthen into something sufficiently robust as they have designed here.

In the meantime we will all get used to the concept and as stated, imaginations will surely run wild.

Bigelow Inflatable Module Will be Added to Space Station

The next addition to the International Space Station will likely be an inflatable module from Bigelow Aerospace. NASA announced today they have awarded a $17.8 million contract to Bigelow to provide a new module for the ISS. “The Bigelow Expandable Activity Module will demonstrate the benefits of this space habitat technology for future exploration and commercial space endeavors,” NASA said in a press release. This would be the first privately built module to be added to the space station.

“The International Space Station is a unique laboratory that enables important discoveries that benefit humanity and vastly increase understanding of how humans can live and work in space for long periods,” NASA Deputy Administrator Lori Garver said. “This partnership agreement for the use of expandable habitats represents a step forward in cutting-edge technology that can allow humans to thrive in space safely and affordably, and heralds important progress in U.S. commercial space innovation.”

In 2006 Bigelow launched their Genesis I inflatable test module into orbit and according to their website, it is still functioning and “continuing to produce invaluable images, videos and data for Bigelow Aerospace. It is now demonstrating the long-term viability of expandable habitat technology in an actual orbital environment.”