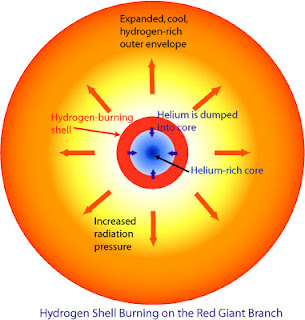 At some point, a flawed paradigm will start cranking out absurd results. In this instance, our paradigm for measuring age in the universe is telling us that a nearby star that is still in the hydrogen burn stage is older than the universe. This is nonsense of course.

What it tells us is that our models for stellar evolution are incomplete at least and our assumptions on age and distance are deeply flawed as we have long since thought.

I think about the universe using two conjectures. It is steady state in appearance and relative velocity is negligible. The red shift varies directly as to transit time and thus with the age of the universe and its content then. More simply the photon arrives from the past in which the content of the universe was smaller. This induces our red shift.

In fact that nearby star is going to turn out to be quite young and our real assumption is just wrong and must be revisited.

Oldest star in the universe is right in our stellar neighborhood


Nothing is older than the universe, right? Well, don't be so sure about that. Astronomers are reporting that a nearby star could older than The Big Bang by almost a billion years!

For nearly 100 years, astronomers have been studying a bright subgiant star named HD 140283 and struggling to pin down the age of it.

HD 140283 is remarkable for the fact that it is almost entirely composed of hydrogen and helium. That may seem like a strange thing for a star to be remarkable for, but whereas most other stars are mainly hydrogen and helium, they also contain heavier elements, such as oxygen, carbon, neon and iron, equal to at least a few per cent of their mass. These heavier elements were all created in thecores of dying stars, and spread out in the universe when those dying stars exploded. Thus, this means that HD 140283 is almost certainly one of the first stars that appeared in the universe, before these heavier elements were generated.

The astronomers were able to figure out its age by determining its exact distance from us (a mere 190 light years) and taking very precise measurements of its brightness. Since the star is now in the process of exhausting the hydrogen at its core and switching to burning helium — a process which will cause it to dim in a very specific way — the exact distance, brightness and how much that brightness dims reveals the star's age.

The result they got was baffling, as their calculations showed that the star is 13.9 billion years old! For reference, our best estimate for the age of the universe is 13.7 billion years!

Now, there's a 700-million-year margin of error in their calculations, which may seem really big, but these are huge numbers we're dealing with, so the error is still small (about 5%) compared to the result. That means that HD 140283 is somewhere between 13.2 billion years old (roughly the age of our galaxy) and 14.6 billion years old (nearly one billion years older than the universe).

Personally, I'm guessing that the true age of this star is going to be somewhere towards the younger end of that range. However, if HD 140283 truly is as old as they're saying, does it rewrite what we know about the age of the universe, or perhaps what we know about stellar evolution?

Even if HD 140283 doesn't pre-date The Big Bang, and thus rewrite our understanding of how the universe formed, its extreme age could still lead to some incredible discoveries.

Was it a lonely wanderer in the universe, until it got caught up in our galaxy's gravitational influence and settled into our stellar neighborhood? Perhaps it was a relatively small companion to the star that collapsed to create the supermassive black hole at the centre of our galaxy. Has it been circling around the galactic disk for all these billions of years, as the other stars in the Milky Way formed around it?

We may never know the answers to questions like these, but this star is simply another example of the incredible wonders contained in our universe.