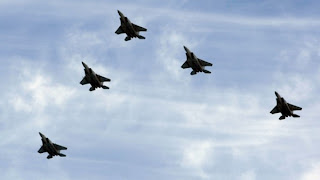 Let us make it simple. When the Assad regime in Syria falls or at least enters its terminal stage, the Israeli air force will act to destroy all threats available then and there as if war had been declared. They may even claim it is in support of the new regime.

This will cleanly eliminate a Syrian threat for years to come and may partially stabilize the Northern flank. Most certainly, Hezbollah is well on the way to been fully isolated and Iranian regime change would finish that. And the Iranian string is surely running out.

Thus Israel is able to operate over Syrian air space to defend it interests with scant consequence.

January 30, 2013 - MIDDLE EAST - A western diplomat and a security source told Reuters that Israeli jets attacked a target on the Syrian-Lebanese border overnight. "The Israeli air force blew up a convoy which had just crossed the border from Syria into Lebanon," an unnamed security source told Agence France-Press.

A "well-placed defense analyst" told John Ray of ITV News that the strike was in Hezbollah Lebanese territory and the missile struck a "truck of scud and antiaircraft missiles" headed to members of the Iran-backed militant group. The reported strike comes amid Israeli concerns that Syrian President Bashar al-Assad's chemical and/or conventional weapons could fall into the hands of extremist rebels or Hezbollah guerrillas.


On Sunday Israel's vice premier Silvan Shalom said that any sign Syria's grip on its chemical weapons is slipping could trigger Israeli military strikes. On Tuesday Dan Williams of Reuters reported that Israeli officials said Syria's advanced Russian-supplied weapons — including anti-aircraft and anti-ship missiles — represent as much of a threat as unconventional weapons.


Earlier the Lebanese army reported that three sets of Israeli jets flew entered its airspace throughout the night. On Tuesday Israeli air force chief Major-General Amir Eshel told an international aerospace conference said the air force was involved in "a campaign between wars," working with Israeli intelligence agencies in often covert missions "to reduce the immediate threats [and] to create better conditions in which we will be able to win the wars, when they happen."


"We do not comment on reports of this kind," an Israeli Defense Force spokeswoman told Reuters. In October Sudan accused Israel of bombing a arms factory that was widely believed to be owned by Iran and used to supply weapons to Hamas in Gaza. - Business Insider.