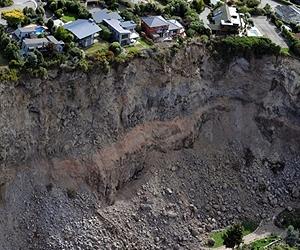 It is worth remarking that both Sumatra and Northern Japan were ultimately surprises. This allows us to identify the rick of such a surprise.

Other such risks as may still exist are remnant subsidence events left over from the Ice Age. That includes the Mid Atlantic Ridge and the Cuban Arc. The time frames there though are surely measured in thousands of years and have steadily lessened.

Otherwise it is all about the ring of fire and the impact of the Indian sub plate on the Middle East. That effect also extends into the Mediterranean.

There is still far too much country in the wrong place that is badly exposed to huge low probability risk.

"We find that 87% of the 15 largest (8.6 magnitude or higher) and half of the 50 largest (8.4 magnitude or higher) earthquakes of the past century are associated with intersection regions between oceanic fracture zones and subduction zones," says Dietmar Muller, researcher at the University of Sydney in Australia and lead author of the Solid Earth paper. The connection is less striking for smaller earthquakes.

Powerful earthquakes related to these intersection regions include the destructive 2011 Tohoku-Oki and 2004 Sumatra events.

"If the association we found were due to a random data distribution, only about 25% of great subduction earthquakes should coincide with these special tectonic environments. Therefore, we can rule out that the link we found is just due to chance," he adds.

The researchers considered about 1,500 earthquakes in their study. They used a database of significant post-1900 events, as well as geophysical data mapping fracture zones and subduction zones, among others. They analysed information from these databases by using a specific data mining method.

"The method was originally developed for analysing online user data," says Thomas Landgrebe, also involved in the study. "The technique we apply is commonly used to find a few specific items which are expected to be most appealing to an Internet user. Instead, we use it to find which tectonic environment is most suitable for generating great earthquakes."

Since earthquake generation is a very complex process, the scientists don't yet have a complete understanding of why great earthquakes prefer the intersection areas. They suggest that it is due to the physical properties of fracture zones, which result in "strong, persistent coupling in the subduction boundaries," Landgrebe explains. This means that the subduction fault area is locked and thus capable of accumulating stress over long periods of time.

"The connection we have uncovered provides critical information for seismologists to, in the long run, pinpoint particular tectonic environments that are statistically more prone to strong seismic coupling and great earthquake supercycles," Muller says. An area with earthquake supercycles experiences recurring powerful earthquakes every few centuries or millennia.

Regions that have long earthquake supercycles are usually not picked up as risk areas by seismic hazard maps as these are constructed mainly using data collected after 1900. An example is the area of the 2011 Tohoku-Oki earthquake, which had no record of large earthquakes over the past century and was not predicted to be of significant risk by previous hazard maps.

"The power of our new method is that it does pick up many of these regions and, hence, could contribute to much-needed improvements of long-term seismic hazard maps," Muller explains.

"Even though we don't fully understand the physics of long earthquake cycles, any improvements that can be made using statistical data analysis should be considered as they can help reduce earthquake damage and loss of lif