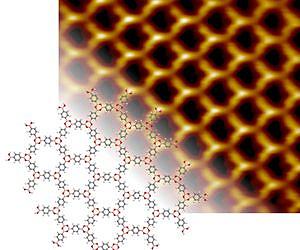 We are now modifying the molecular surface in such a way as to enhance its effect on nearby molecules. This is quite unexpected but will certainly impact industrial process sooner or later.

As posted before we have entered the age of engineering molecules directly to improve effectiveness and clearly getting way more confident and much less surprised. Again though it is early days although it is clear that chemistry is well on the way to been what electrical engineering became a few decades ago and biology became more recently.

They all support each other and the results remain wondrous.

In a forced game of molecular tug-of war, some strings of atoms can act like a lever, accelerating reactions 1000 times faster than other molecules. The discovery suggests that scientists could use these molecular levers to drive chemical and mechanical reactivity among atoms and ultimately engineer more efficient materials.

"We are interested in designing new, stress-responsive materials, so we are trying to develop reactions that are very slow normally but that can be accelerated efficiently by force," said Duke chemist Steve Craig, who headed the research.

In recent experiments, Craig and his team found that a molecule made with a polynorbornene backbone can act as a lever to open a ring embedded within the molecule 1000 times faster than a similar ring being tugged at on a polybutadiene scaffold. The results, which appear Dec. 23 in Nature Chemistry, suggest that a simple change in the backbone may affect the how fast mechanically assisted reactions occur.

Scientists are interested in this type of molecular tug-of-war because many materials break down after repeated cycles of tugging, stress and other forces.

"If we can channel usually destructive forces into constructive pathways, we could trigger reactions that make the material stronger when and where it is most useful," Craig said. Researchers might then be able to extend the material's lifetime, which might in the long term have applications ranging from composites for airplane frames to biomedical implants.

In the experiment, Craig, who is a professor and chair of the chemistry department, and his team used the equivalent of microscopic tweezers to grab onto two parts of atomic chains and pulled them so that they would break open, or react, in certain spots.

The team predicted that one molecule would react more efficiently than the other but was surprised to find that the force-induced rates differed by three orders of magnitude, an amount that suggests that the polynorbornene backbone can actually accelerate forced reactions the way a crowbar quickens pulling a nail from a wall.

Craig said changes to the molecular group undergoing the reaction may have a much smaller effect than changes to nearby, unreactive molecules like those on the backbone.

It is also a good starting point to identify other molecular backbones that are easy to make and have the largest response to changes in nearby reactions, features Craig said might help in developing even better, more responsive materials.