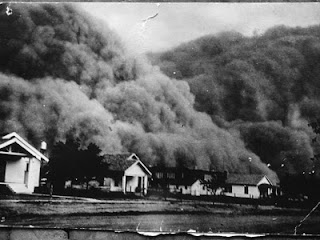 Our practices are substantially better but the necessary conditions happen to be upon us. Most likely we have an additional five years to suffer through before the climatic cycle turns over and provides enough water. We should still avoid severe dust bowl conditions.

In time engineering and the Eden machine (Google this blog) can change it all, but we may be a century away. I would still like to see the buffalo commons restored on the waste lands were growing is either impossible or inadvisable.

Otherwise, this will be followed by another sixty years of good growing conditions.

Maybe next time we will have it all right.


Storms on U.S. Plains stir memories of the "Dust Bowl"

LIBERAL, Kansas (Reuters) - Real estate agent Mark Faulkner recalls a day in early November when he was putting up a sign near Ulysses, Kansas, in 60-miles-per-hour winds that blew up blinding dust clouds.

"There were places you could not see, it was blowing so hard," Faulkner said.

Residents of the Great Plains over the last year or so have experienced storms reminiscent of the 1930s Dust Bowl. Experts say the new storms have been brought on by a combination of historic drought, a dwindling Ogallala Aquifer underground water supply, climate change and government farm programs.

Nearly 62 percent of the United States was gripped by drought, as of December 25, and "exceptional" drought enveloped parts of Kansas, Colorado, Oklahoma, Texas, and New Mexico, according to the U.S. Drought Monitor.

There is no relief in sight for the Great Plains at least through the winter, according to Drought Monitor forecasts, which could portend more dust clouds.

A wave of dust storms during the 1930s crippled agriculture over a vast area of the Great Plains and led to an exodus of people, many to California, dramatized in John Steinbeck's novel "The Grapes of Wrath."

While few people believe it could get that bad again, the new storms have some experts worried that similar conditions - if not the catastrophic environmental disaster of the 1930s - are returning to parts of Texas, Oklahoma, New Mexico, Kansas and Colorado.

"I hope we don't talk ourselves into complacency with easy assumptions that a Dust Bowl could never happen again," said Craig Cox, agriculture director for the Environmental Working Group, a national conservation group that supports converting more tilled soil to grassland. "Instead, we should do what it takes to make sure it doesn't happen again."

Satellite images on December 19 showed a dust storm stretching over an area of 150 miles from extreme southwestern Oklahoma across the Panhandle of Texas around Lubbock to extreme eastern New Mexico, said Jody James, National Weather Service meteorologist in Lubbock. Visibility was reduced to half a mile in places, stoked by high winds, he said. At least one person was killed and more than a dozen injured in car crashes.

"I definitely think these dust storms will become more common until we get more measurable precipitation," James said.

The Great Plains is a flat, semi-arid, area with few trees, where vast herds of buffalo once thrived on native grasses. Settlers plowed up most of the grassland in the late 19th and early 20th centuries to create the wheat-growing breadbasket of the United States, encouraged by high commodity prices and free "homestead" land from the government.

The era known as the "Dirty 30s" - chronicled by Ken Burns in a Public Broadcasting Service documentary that aired in November - was when a 1930s drought gripped the Great Plains and winds carried away exposed soil in massive dust clouds.

Bill Fitzgerald, 87, a farmer near Sublette, Kansas, remembers "Black Sunday" on April 14, 1935, when a clear, sunny day in southwest Kansas turned black as night by mid afternoon because of a massive cloud of dust that swept from Nebraska to the Texas panhandle.

"My older brother and I were in my dad's 1927 or '28 Chevy truck a mile north and a mile west of the house and we saw it rolling in," Fitzgerald said. "It was about 10 p.m. when it cleared enough for us to go home."

Farming practices have vastly improved since the 1930s. Farmers now leave plant remnants on the top of the soil and less soil is exposed, to preserve moisture and prevent erosion.0

Irrigation beginning in the 1940s from the Ogallala aquifer, a huge network of water under the Great Plains, also made land less vulnerable to dust storms.

But the Ogallala aquifer is drying up after years of drawing out more water than was replenished.

Many farmers have had to drill deeper wells to find water. Others are giving up on irrigation altogether, which means they can no longer grow crops of high-yielding and lucrative corn. They will instead grow wheat, cotton or grain sorghum on dry land, which depends completely on natural precipitation in an area that typically gets 20 inches of rain a year or less.


Near Sublette, Kansas, farmer Gail Wright said he would probably give up irrigating two square miles of his land and would plant wheat and grain sorghum instead of corn because of the diminishing aquifer. Drilling deeper wells would cost $120,000 each, Wright said.

Another farmer in Sublette, 79-year-old Lawrence Withers, whose family farms land his grandfather settled in 1887, is resigned to a future without irrigation.

"We have pumped 170 feet off the aquifer, that's gone. There's just a little tick of water at the bottom," he said.

The Ogallala supplies water to 176,000 square miles (456,000 square km) of land in parts of eight states from the Texas panhandle to southern South Dakota. That amounts to about 27 percent of all irrigated land in the nation, according to the U.S. Geological Survey.

The volume of water in the aquifer stood at about 2.9 billion acre feet in 2009, a decline of about 9 percent since 1950, according to the Geological Survey. About two-and-a-half times as much water was drawn out in the 14 years ended 2009 as during the prior 15-year period, data shows.

The water may run out in 25 years or less in parts of Texas, Oklahoma and southwest Kansas, although in other areas it has 50 to 200 years left, according to the Geological Survey.

Rationing has been imposed on irrigation in the region but it may be too little too late.

"It's a situation where across the Plains the demand far exceeds the annual recharge," said Mark Rude, executive director of the Southwest Kansas Groundwater Management District.

The worst drought in decades has exacerbated the situation. The semi-arid area around Lubbock, which typically gets about 19 inches of rain a year, received less than 6 inches in 2011, the lowest ever recorded. This year was better but still far below normal at 12.5 inches, meteorologist James said.

Climate change is also having an impact on the region, said atmospheric scientist Katharine Hayhoe, co-director of the Climate Science Center at Texas Tech University in Lubbock.

The average annual temperature in Lubbock has increased by one full degree over the last decade, according to National Weather Service data, and the average amount of rainfall has fallen during summer months by about .50 inch over the decade.

Federal government subsidized crop insurance pays farmers whether they produce a crop or not, encouraging farmers to plant even in a drought year.

Another subsidized U.S. government program that pays farmers to take sensitive marginal land out of crop production and put it into grassland is gradually shrinking.

In a possible case of history repeating itself, high commodity prices are encouraging farmers to break up the land and plant crops when the 10-year conservation contracts with the government expire, said environmentalist Cox. This is similar to what happened in the 1920s when vast areas of grassland were plowed up.

The government also has imposed restrictions on how much land can go into conservation reserves to save money at a time of massive U.S. budget deficits, he said.

The amount of land in conservation reserves has declined by more than 2.3 million acres over the last five years in five states of the Great Plains - Texas, Oklahoma, Kansas, Colorado and New Mexico, according to U.S. Agriculture Department data.

If most of that land is plowed up for crops it could lead to more dust storms in the future.

"I think you are probably going to see increased erosion if that happens," said Richard Zartman, Chairman of the Plant and Soil Science Department at Texas Tech, adding that it was unlikely to get as bad as the Dust Bowl days.