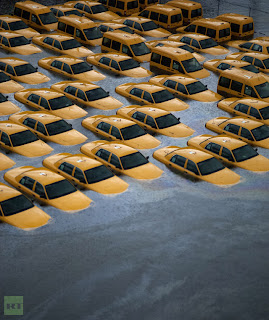 Ellen is right on this. In fact it is always better to localize governmental functionality and decision making as much as possible and disaster management in particular.

Once again we are suffering from the curse of the King. Central power deludes itself into thinking that only one person is able to make decisions and naturally dis-empowers everyone else with bureaucratic arteriosclerosis.

It took me a long time to understand that central banking itself is now stuck the same way. Its power needs to be handed down just as deep as is possible and even beyond. Surprise me and the people will surprise you.

Political Football Over Disaster Relief: Another Argument for Public Banking


Post-Sandy and post-Katrina "disaster relief" has been characterized by more profit-taking by big business than relief to families and small businesses. The Bank of North Dakota demonstrated it doesn't have to be that way after flooding devastated Grand Forks in 1997.

In a shameless display of putting politics before human needs, Congress began 2013 still scrapping over a $60 billion Hurricane Sandy relief bill fully nine weeks after the disaster hit.   And if the Katrina experience is any indication, the bill may not bring adequate relief to struggling and displaced homeowners even when it is finally passed.

The damage wrought by Sandy to New York and New Jersey coastal areas wassimilar in scale  to that to New Orleans from Hurricane Katrina in 2005. Just two weeks after Katrina hit, Congress approved $62.3 billion in emergency appropriations, along with numerous subsequent emergency funding requests to cover the damages, which topped $100 billion. Yet as noted on the Occupy Sandy Facebook page, federal relief funds post-Katrina were gutted in favor of "privatizing and outsourcing relief, making room for predatory lenders, disaster capitalists, and gentrification developers."

According to a report by Strike Debt, the vast majority of FEMA's resources and efforts are spent on public assistance programs that provide infrastructure restoration. Individual victims of disaster are for the most part just offered personal loans - loans that have many features of predatory subprime lending.

Disaster victims are now being expected to shoulder relief expenses that used to be shared publicly. Most people believe they are covered by their insurance policies or by the Federal Emergency Management Agency (FEMA), but many disaster victims have found that their insurance policies include obscure provisions that exclude coverage, and the only aid that FEMA gives to individuals is the opportunity to take on more debt.

Most Sandy Victims Are Left Stranded

The report by Strike Debt was based on observations made at a community meeting in Midland Beach, Staten Island, on November 18, 2012, as well as on interviews with FEMA and Small Business Association (SBA) representatives, volunteer workers, local business owners, and residents throughout New York City. According to the report, there are three main sources of financial support being offered to Sandy victims: insurance, grants, and loans. Federal support is available only once private insurance has been exhausted.

In many cases, residents who believed they had insurance that would cover the Sandy disaster are finding that, for a variety of reasons involving the fine print in the policies, their claims are being denied. Difficult-to-understand clauses allow insurers to deny coverage depending on such things as whether the storm was officially classified as a hurricane or a tropical storm.

For federal aid programs, according to the report:

* Victims are required to first apply for loans before qualifying to apply for FEMA aid, placing the economic cost of the disaster on the individual victim.

* Aid programs favor those who can take on debt, further exacerbating pre-existing inequalities among residents.

* Federal programs are inflexible and fail to meet even basic individual and community needs.

* Relief options are not clearly communicated or well understood. Policies are so complex that even lawyers are confused.

Except for temporary living costs, FEMA grants are accessible only after the homeowner, renter or business applies for an SBA loan.  If the applicant qualifies for a loan, he or she is not likely to be provided further FEMA aid. Disaster loans are made through FEMA on the basis of credit history, and favorable interest rates are available only if the applicant cannot get credit elsewhere. That means favorable interest rates are offered only if an applicant cannot qualify for credit through a commercial bank. When the banks got in trouble themselves, the Fed dropped the Fed funds rate (the rate at which they borrow from each other) to nearly zero. But no such relief is extended to disaster victims.

There is no FEMA money for small businesses other than loans, and businesses have difficulty taking on debt when they don't know when they will be able to reopen. The small business application is reported to be at least 30 pages long, and is often difficult to complete because flooding has destroyed much of the required paperwork.

Many homeowners were strained by mortgages that were underwater prior to the storm, and their properties have now depreciated to the point of having no market value at all.  They have no choice but to try to rebuild, but how can they take on more debt?  The focus on lending, says the report, moves money from the victims of disaster into the hands of loan servicers, who make enormous profits off these loans.

That is the state of disaster relief in most parts of the country, but one state has developed a different model – North Dakota. North Dakota is the only state in the union to have its own state-owned bank. The Bank of North Dakota (BND) has a mandate to serve the public interest, and it has no shareholders other than the state itself.  That gives it wide-reaching flexibility in emergencies, allowing it to act quickly to catalyze and coordinate resources.

The BND's emergency capabilities were demonstrated in 1997, when record flooding and fires devastated Grand Forks, North Dakota. The town and its sister city, East Grand Forks on the Minnesota side of the river, lay in ruins. Floodwaters covered virtually the entire city and took weeks to fully recede. Property losses topped $3.5 billion.

The response of the state-owned bank was immediate and comprehensive, demonstrating a financial flexibility and public generosity that no privately-owned bank could match. Soon after the floodwaters swept through Grand Forks, the BND was helping families and businesses recover. Led by then-president and CEO John Hoeven (future North Dakota governor and US senator), the bank quickly established nearly $70 million in credit lines – to the city, the state National Guard, the state Division of Emergency Management, the University of North Dakota in Grand Forks, and for individuals, businesses and farms. It also launched a Grand Forks disaster relief loan program and allocated $5 million to help other areas affected by the spring floods. Local financial institutions matched these funds, making a total of more than $70 million available.


Besides property damage, flooding swept away many jobs, leaving families without livelihoods. The BND coordinated with the US Department of Education to ensure forbearance on student loans; worked closely with the Federal Housing Administration and Veterans Administration to gain forbearance on federally-backed home loans; established a center where people could apply for federal/state housing assistance; and worked with the North Dakota Community Foundation to coordinate a disaster relief fund, for which the bank served as the deposit base. The bank also reduced interest rates on existing Family Farm and Farm Operating programs. Families used these low-interest loans to restructure debt and cover operating losses caused by wet conditions in their fields.


To help finance the disaster recovery, the BND obtained funds at reduced rates from the Federal Home Loan Bank.  These savings were then passed on to flood-affected borrowers in the form of lower interest rates.

Just as we can rely on our local public fire department to be there for emergencies, so a public bank can be relied on to lend a true helping hand when private banks, insurers, and FEMA may not. Unlike private insurers that are prone to withdrawing coverage on obscure technicalities, a publicly-owned bank is not beholden to shareholder profit-seeking; and unlike federal disaster relief agencies, a public bank is not dependent on a penny-pinching Congress for funds. Like private banks, it has the ability to create money in the form of bank credit on its books, and it has access to very low interest rates. But private banks have a business model that requires them to take advantage of these low rates to extract as much debt service as the market will bear.  A public bank can pass these low rates on to disaster victims and local governments.

When the biggest private banks needed an emergency bailout, trillions of dollars in nearly-interest-free money came flooding their way. Why? As Sen. Dick Durbin said of Congress in 2009, "Wall Street owns the place.” The private banking industry also owns all twelve branches of the Federal Reserve. If we the people want the sort of security in emergencies that is available to Wall Street banks, we need to own some banks ourselves.

Just as Occupy Sandy has pre-empted the official rescue agencies through community organizing, so a Public Bank of New York or New Jersey could pre-empt the vulture Wall Street banks and finance the state's own rebuilding. Twenty states have now introduced bills of various sorts to establish their own banks.  For more information on the campaign in your state, see here.